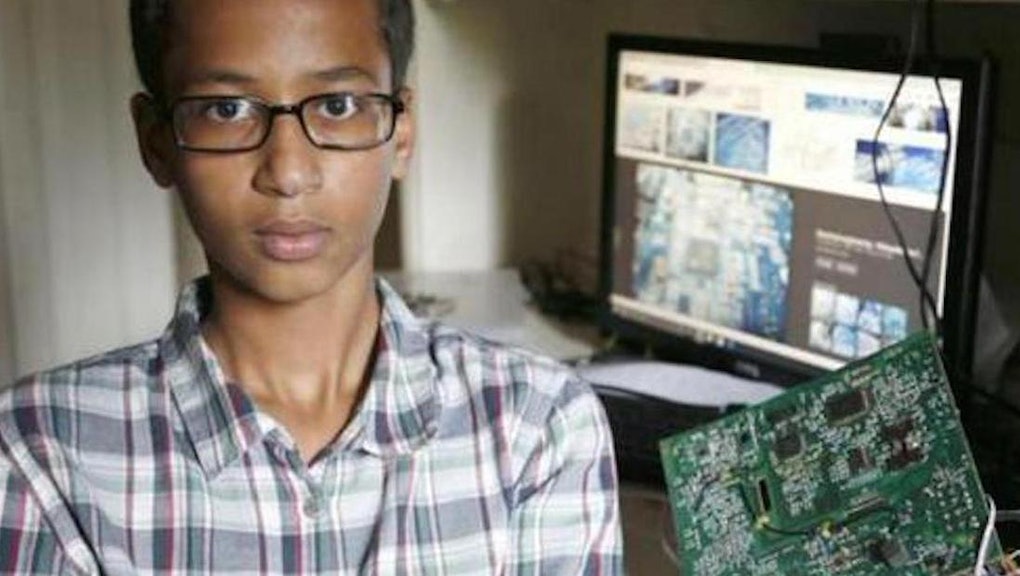 Texas Police Officer to Ahmed Mohamed After Arrest: "That's Who I Thought It Was"

When 14-year-old Ahmed Mohamed, a high school student in Irving, Texas, was pulled out of class Monday and into a room where four police officers were waiting, this is how one of the officers responded to his appearance: "Yup. That's who I thought it was." The officer reportedly said this after taking one look at Mohamed, the Dallas Morning News reports. Mohamed said he and the officer had never seen each other before.

On Monday, police arrested Mohamed, who is Muslim, for bringing a homemade clock into school that MacArthur High School teachers and administrators claimed looked like a bomb.

Officers proceeded to question Mohamed about the device he brought to his English class that day. While Mohamed told everyone it was a clock — it included a circuit board and some wires — his teacher saw it as something more threatening.

"We have no information that he claimed it was a bomb," police spokesman James McLellan told the Dallas Morning News. "He kept maintaining it was a clock, but there was no broader explanation."

A bigger trend: According to the Dallas Morning News, after the police officer's initial response, Mohamed felt "suddenly conscious of his brown skin and name."

"They were like, 'So you tried to make a bomb?'" Mohamed told the Dallas Morning News. Police handcuffed Mohamed and took him to a juvenile detention center. He may face charges of making a hoax bomb.

Mohamed's story appears to be indicative of a larger problem in the United States of non-Muslims feeling suspicious of people who follow Islam, have Muslim names or appear to be from the Middle East.

Islamophobia is most commonly defined as "an exaggerated fear, hatred, and hostility toward Islam and Muslims that is perpetuated by negative stereotypes resulting in bias, discrimination and the marginalization and exclusion of Muslims from social, political and civic life," according to Gallup.

Social media users fire back: The story of Mohamed's arrest has sparked outrage on social media. Many Twitter users have adopted the hashtag #IStandWithAhmed to show their support for the high school student. Many have cried foul over the school's reaction to Mohamed's homemade clock, calling his arrest anti-Muslim bigotry.

Many of their responses centered on the fact that had Mohamed been white and non-Muslim, authorities likely would not have found his homemade clock a threat. According to blogger Anil Dash, Mohamed and his family started the @IStandWithAhmed Twitter account Wednesday morning as the story began going viral.