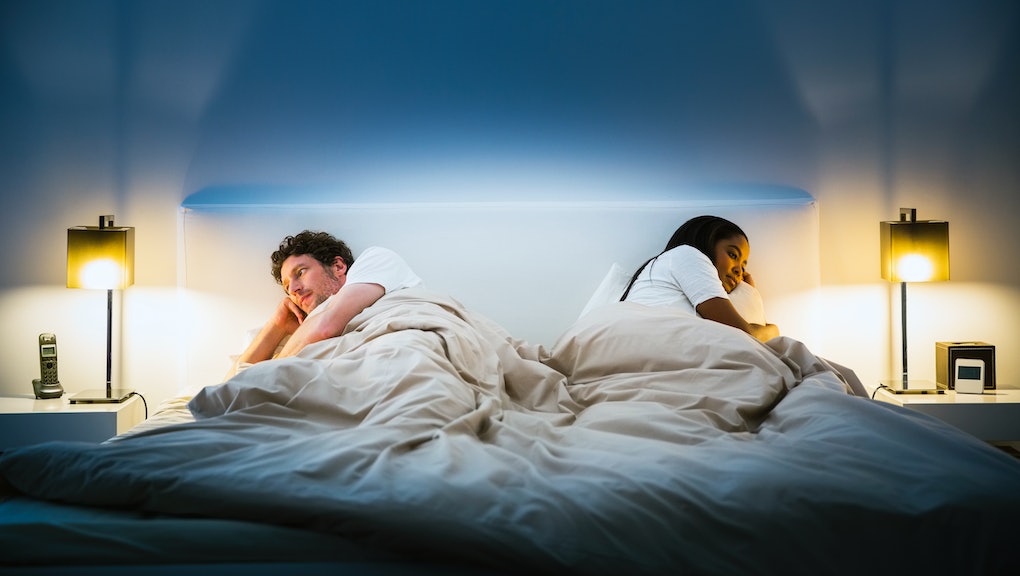 Robert*, 22, had been dating his girlfriend for around a year when he realized that he was totally in love with her. So when a traumatic death occurred in her family in 2013, he stood by her through the aftermath. As the weeks and months passed, Robert noticed something unexpected happening: The two were having sex more and more infrequently, until they just stopped having sex altogether.

At first, not being physically intimate with his girlfriend took an emotional toll on Robert. He started to wonder if he was doing something wrong, if she no longer found him desirable, if the relationship was failing. But he didn't want to give up right away. "A lot of people are too willing to throw something away for the chance that something better will come along," he told Mic.

Seeking support, he turned to the subreddit r/DeadBedrooms. He found a subreddit of more than 27,000 men and women in their 20s and 30s, all of whom are dealing with the same problem: a temporary or permanent sex drought in their relationship.

The death of sex: The plight of single people in their 20s trying to navigate hookup culture gets a lot of media attention. But there's one issue young couples are facing that is rarely openly discussed: the dead bedroom, when one or both partners experience a sudden dip in sexual interest and stop having sex altogether.

Even though we typically think of our 20s as the height of our sex lives, experts say that's not always the case. Young people suffer from what's commonly known as "bed death" more often than we think. "It's very common for me to see couples in their 20s who are distressed over sexless relationships," New York City sex therapist Dr. Stephen Snyder told Mic.

And contrary to old-fashioned stereotypes about female libido being lower than that of men, it's not just women who say, "Not tonight, honey." Snyder says many of his patients are men struggling with being sexually attracted to their spouses.

"Some guys just don't seem to be able to sustain desire in long-term, committed relationships," Snyder said. "Some guys have a Madonna/whore thing where once they love a woman deeply, they can't stand the thought of 'debasing' her by thinking of her as a sexual object."

Many of the subscribers to r/DeadBedrooms are women griping about their male significant others' low sex drives. "I still want sex and affection. I hardly get both. I'm starving for attention," one 30-year-old woman who saw her sex life disappear after she gave birth wrote.

What's the difference between a dead bedroom and a dry spell?: It's important to note there's a distinction between a decline in sex and cessation of sexual activity altogether. While it's natural for a couple to experience "dry spells" after the dopamine of the honeymoon period is over, psychologist Barbara Greenberg told Mic that it becomes problematic if the couple has not had sex in six months to a year. While this number might sound shocking, it's far more common than we might think. In fact, in 2009 the New York Times reported an estimate that nearly 15% of all married couples have not had sex within the past six months to a year.

The cause of dead bedrooms varies widely depending on the couple. For some, the cause might be physiological. It's fairly common for people in their 20s to experience decreased sex drive as a result of taking certain medications, such as antidepressants. For men, erectile dysfunction can also play a role: Experts estimate 5% of men between ages 20 and 39 experience some form of the condition.

Since erectile dysfunction or conditions like female hypoactive sexual desire disorder usually don't occur until later in life, if couples in their 20s are experiencing a dead bedroom, there's a good chance the cause is psychological. Snyder told Mic that for couples who live together, a dry spell could be prompted by them simply becoming too familiar with each other.

"If a couple, for whatever reason, stops having sex for a significant period of time, then something like the 'incest taboo' can kick in," he said. "Our minds seem programmed to interpret 'person I'm living with, but not having sex with' as equivalent to 'sibling.'"

It could also be a sign that the relationship is simply moving too fast, or, in some cases, that it's not working to begin with. Beth, 27, said whenever she's experienced a sexual drought, it's usually due to unspoken issues in the relationship itself.

"Most of the time when that's happened to me, it has been the beginning of the end," she told Mic. "It means that somebody is emotionally checked out, and it might even be a mystery to everyone involved. I think that's usually a high indication that shit has gone awry."

Jerilyn, 26, was engaged for about a year before she and her fiancee suddenly stopped having sex. After some time, she realized she simply didn't want to commit to her partner, who she felt was controlling and prevented her from growing into the best version of herself.

Before getting engaged, "I hadn't explored myself at all, and I was scared no one would love me like he did," she told Mic. So she broke up with her fiancee, which led to her realizing the true cause of her sexual dry spell. "I was being held back," she said. "So I held back my body."

There's a solution to this problem, but it's not easy: As was the case with Jerilyn, a dead bedroom can sometimes be a sign the relationship is over. If your partner is consistently pulling away from sex, it could potentially mean they're "really done with the relationship, but [haven't] been able to admit this" to you yet, Snyder said.

But figuring out whether a lack of sex is a standard dry spell or a sign of a deeper problem is tricky, and the answer to that question largely depends on the couple. Before jumping to any rash conclusions about whether your relationship is doomed, it's useful to ask yourself whether there's anything going on, at work or at home, that could be contributing to the situation. It's also helpful to get an outside opinion, be it from a friend or couples therapist.

Above all else, it's important for young couples distressed over their lack of sex to find the root of the issue and get in touch with what drew them to each other in the first place. That means taking the time to identify deeply ingrained habits and figuring out how to break out of them.

"Maybe [couples] have this pattern where they go out, they go home at 9 [p.m.], they drink and then they fall asleep," Greenberg, the psychologist, told Mic. "They have to change old habits and try to get back into some of the habits they had earlier on in the relationship."

In the end, we all have different sexual needs and desires that ebb and flow. It's totally normal for couples to experience peaks and valleys in sexual activity and for partners to experience different levels of desire at different times, for any number of reasons. It's only when desire is absent from a relationship for an extended period of time that a dead bedroom becomes an issue.

That's why it's important for couples to communicate with each other and identify the cause of a waning or even nonexistent sex life, regardless of how awkward or uncomfortable it might be. For some, having this conversation can result in the mutual realization that the relationship simply isn't working. But for many couples, it can become a chance to deepen their relationship and rekindle the spark that drew them together in the first place.

For Robert and his girlfriend, a dip in their sex life was a hurdle that became a chance to solidify their love for each other. Their patience and willingness to communicate about their issues ended up saving their relationship.

"You'll see a lot of times where [someone in a sexless relationship will say they] love the person, they're extremely compatible, except for sex," Robert told Mic. "A lot of people say, 'Well, break it off. They're not giving you what you need.' But how much have they communicated with each other, and are they actually trying to work on it? For me, both people have to put in effort in relationships, or what's the point?"