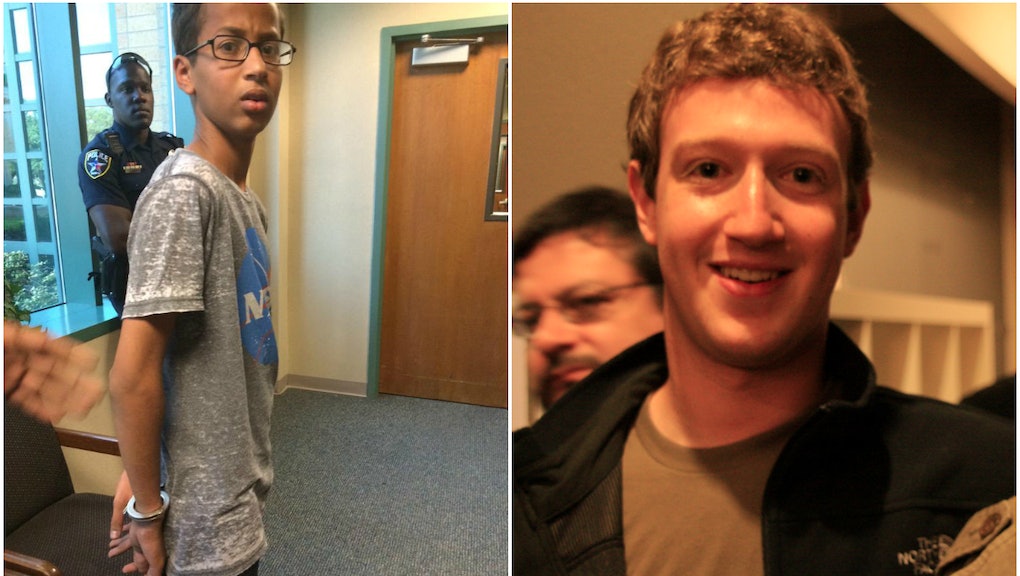 The Biggest Names in Science and Tech Are Showing the U.S. How to Stand With Ahmed

On Wednesday morning, a 14-year-old Muslim student named Ahmed Mohamed was arrested after school officials mistook Mohamed's homemade clock, which he built to impress his teachers, for a bomb.

After a string of grief from the powers that be, including a police officer who allegedly said, "Yup, that's who I thought it was," upon hearing Mohamed was the one arrested, some of the nation's great tech and science minds came to his defense on social media, and invited him to visit spaces that aren't so averse to technology.

The latest: Facebook CEO Mark Zuckerberg. "Having the skill and ambition to build something cool should lead to applause, not arrest," he wrote. "The future belongs to people like Ahmed."

He invited the teen to come swing by the Facebook office. "I'd love to meet you," Zuck told him. "Keep building."

Mohamed, who wore a NASA shirt when he was arrested, is quickly becoming a geek icon.

Astronauts and NASA's Jet Propulsion Lab aerospace experts are asking him to come hang out.

Google sent him an invite to the Google Science Fair:

Mohamed likely didn't enter school that day thinking he'd be singled out as a potential terrorist when his clock's alarm went off during English class. He didn't think he'd end up in handcuffs and on the road to a juvenile detention center. And he, hopefully, didn't expect the teachers and officials in place to protect and educate him to throw him under the bus.

But hopefully he set a precedent: Brilliance, creativity and curiosity shouldn't get you criminalized. It should get you invited to drive a Mars rover.