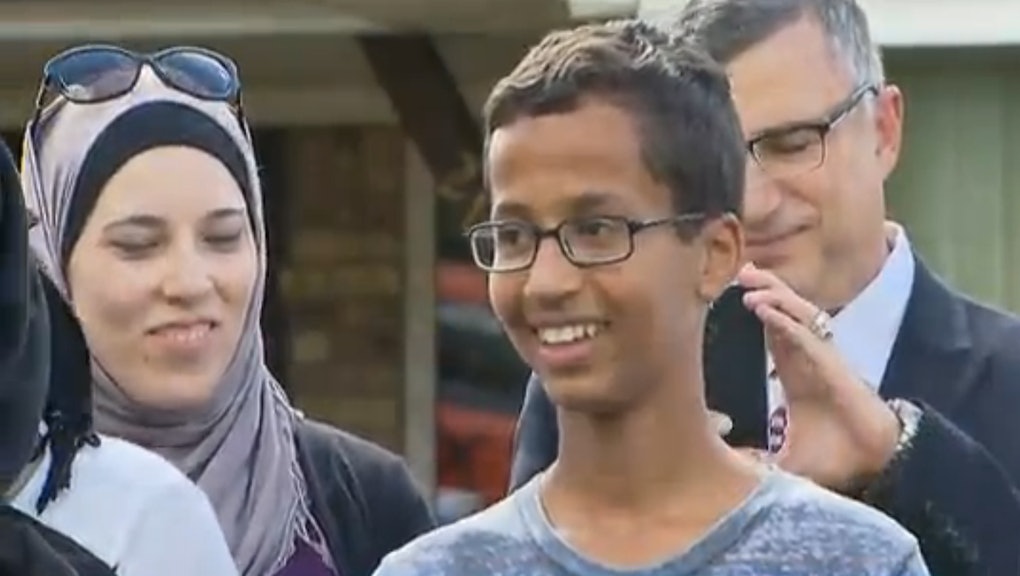 Ahmed Mohamed, Muslim Teenager Arrested for Bringing a Clock to School, Speaks Out

Ahmed Mohamed, the 14-year-old Muslim student who was marched out of school Monday in handcuffs and suspended for bringing a homemade clock to class, gave his first press conference since the incident, which was broadcast on CBS News.

"As-salamu alaykum," a smiling Mohamed told the crowd of well-wishers and journalists. "I'm the person who built a clock and got in a lot of trouble for it."

During the roughly 10-minute press conference, Mohamed, who spoke for about 5 minutes, took a number of questions and shared a simple but powerful message, "Don't let people change who you are."

The story of Mohamed went mega-viral after being reported by the Dallas Morning News on Tuesday. The tech savant built the timepiece in an attempt to impress his teachers. Its resemblance to an old-fashion movie time bomb, however, prompted response from law enforcement after an English teacher discovered the device.

When Mohamed first met with police officers in the principal's office of MacArthur High School, he reportedly became acutely aware of his race. Upon seeing him, an officer he had never met remarked, "Yup. That's who I thought it was."

"But because his name is Mohamed and because of Sept. 11, I think my son got mistreated," Ahmed's father, Mohamed Elhassan Mohamed, told the Dallas Morning News.

The charges were swiftly dropped, but not before a furious response on social media in solidarity with Mohamed. On Wednesday, the hashtag #IStandWithAhmed was heavily trending on Twitter with the United States' 44th commander-in-chief, Barack Obama leading the way.

"I'd love to be on Shark Tank," said Mohamed with a smile before adding that he was considering "transferring schools."