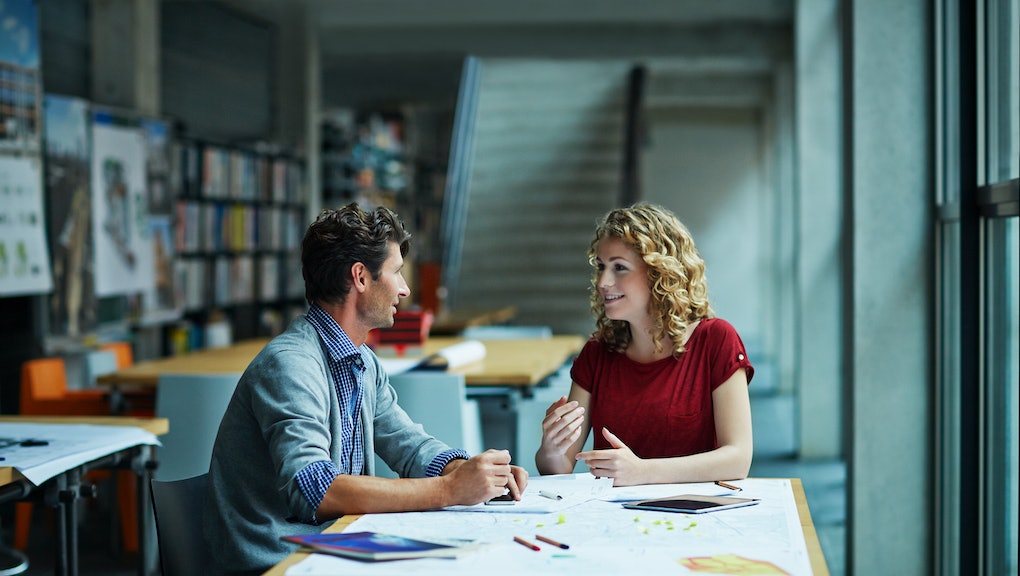 Shortly after starting her job as an account manager at an IT company, 24-year-old Talia* and her coworkers were put in charge of running the firm's annual conference, a three-day affair that included "no sleep, shitty food, needy clients, unappreciative management and tired feet."

"Pairs of us would have to go wait for shipments to arrive or help monitor rooms, which translated to, 'You are stuck with this person for the next three hours,'" Talia told Mic. "Our way to pass the time was to go through every ex-boyfriend, every college internship and every terrible haircut we'd ever had."

In short, the hellish work experience turned into a bonding one, and bonding then turned into friendship.

As young people come to dominate the labor force and reshape work culture, our offices are becoming more casual. They're spaces where employees go to get things done but also to make friends — and they're the kind of important friends we can't necessarily make anywhere else.

However, having work friends is still common even though our friendships might look a bit different than they did, say, before the Internet revolutionized the modern workplace 20 years ago.

Instead of destroying workers' chances of getting to know one another, changing workplace conventions (casual open offices, employees working from home, job-jumping and reliance on office chat software) might actually make it easier for millennials to find friends at the office.

Take, for instance, the remote working trend, which has increased greatly in recent years. Studies have shown that even though workers might not be based in the same city, telecommuting doesn't negatively impact coworker relationships, so long as colleagues are still communicating. Email, G-chat, Slack and the like allow people to do exactly that, whether they're across the office or across the country.

It can also mean having the opportunity to befriend coworkers.

"At my office, we have chat rooms where people talk about politics, share GIFs, talk about books — we even have a chat room for single people," 28-year-old Amber, who works remotely for a marketing software company, told Mic. "When people want to sort of zone out from work for a minute or two or need a break, they find someone to take a walk with or get lunch with, or pop into these chat rooms to talk about real life."

Sometimes, those online chats can get even more personal than those IRL.

"There's a certain intimacy that Slack affords you that face-to-face discussion doesn't," podcast host  Alex Goldman told Slate. "We've had very sensitive conversations in Slack when we're sitting right next to each other."

Common ground is easier to find when we're chasing the same dreams. As we know from all those "millennial surveys," today we seek fulfillment from our careers more than previous generations. We tend to be more inclined to pursue personal passions — writing, for instance, or trying to save the world — as full-time careers. That means many workplaces are essentially more like college campuses: places where young people bond over shared values and life goals.

Even if we don't share big-time passions, we still share the same fields, meaning interests overlap — which can be key to forming deep and lasting bonds with coworkers.

Matthew*, 22, for instance, is a tax accountant, a profession that he says tends to attract practical, driven people like himself. "It takes a certain type of person to be a Big Four tax accountant," Matthew said. "I felt like I had a lot in common with my coworkers. There was a mutual respect for what each other was doing as well as what it took to get there."

Having someone there who really gets what you're going through and wants to make the same sacrifices is key. Debra Major, an Old Dominion University professor who studies organizational psychology, previously told Mic, "We're in a situation where, gosh, this person really understands what I'm going through... He or she gets it, because they're here sharing it with me."

Sometimes your work friends are the only ones around. When he first got the job, Matthew had to relocate to a new city and find a new set of friends. Thousands of millennials find themselves in similar situations as they enter adulthood. Members of our generation are moving to cities at astonishingly high rates. Often, we don't know anyone when we get there. That's why it's important for us to make social contacts in the workplace.

When 24-year-old Giselle* took a job in the same city where she went to college right after graduating, she told Mic, she went to work ready to find new buddies because "everyone I was close to had moved and I needed new friends."

"Most of my coworkers also moved to Austin from somewhere else, and that makes you seek out workplace friendships more," she said.

That also applies when we're spending so much time in the office. Contrary to the view that millennials are lazy, entitled, special snowflakes, our generation is actually invested in working just as hard as our parents'. The average young adult expects to work long hours, which means we know we're going to spend a lot of time (probably too much) with our coworkers. It's only natural that the friendships that blossom would be intense.

"I work well over 60 to 70 hours a week and my coworkers are right there with me," Giselle said. "If I didn't have work friends, I imagine that my life would be a lot lonelier. It's cool to have someone to vent to and joke around with at 9 p.m. when you're still in the office, and who can step out for a smoke break when you just had a hard one-on-one with your manager."

Work friends actually make us better at work. Finding friends at the office can even make us better at our jobs, especially in environments where communication is crucial. Developing personal bonds is also likely to help us tap into our most altruistic instincts, instead of making us want to give everyone in the office the double bird. We might be more willing to help our coworkers on a project when we know them on a deeper level than we would if they were just people we worked with.

But the best part if really when those friendships extend beyond the office walls. "Work friends" are also great Saturday night movie companions, plus-ones to weddings we don't really feel like attending or affirmation that our pants don't fit weird. Work friends see our serious sides but also get to know us when we're vulnerable. They know how we spend our time. They join us in our self-loathing as we consume sad desk lunches.

That feeling of camaraderie is why Talia, who bonded with her coworkers in misery, said she's fully integrated her work friends into her personal life.

"My coworkers have formed relationships with people I went to college and high school with, and now we're all just one big, happy family," Talia said. "Seeing my coworker comment with an inside joke on a childhood friend's Instagram makes me feel remarkably, unbelievably ecstatic."

"The only thing better," she added, "is getting to see these people every day at work."