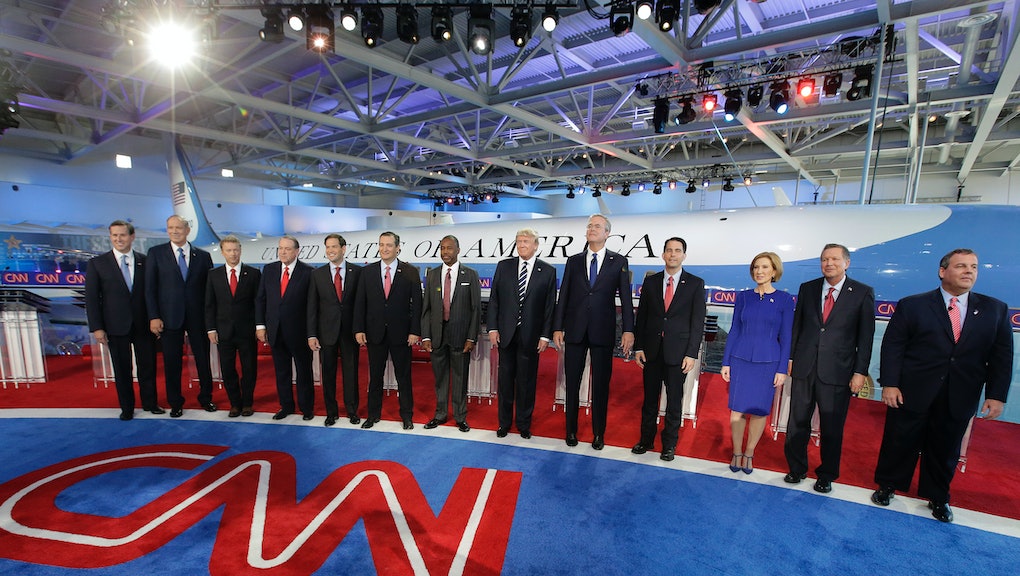 The 15 Republican presidential hopefuls convened in Simi Valley, California, on Wednesday for the second GOP debates of the primary season. CNN played host to the debates, whose participants were split into two groups based on where they stood in the polls.

The top-polling candidates were invited to the prime-time debate at 8 p.m. Eastern. The contenders who didn't meet the criteria for the main event took the stage for a smaller debate at 6 p.m. The candidates slotted for the earlier debate were Louisiana Gov. Bobby Jindal, South Carolina Sen. Lindsey Graham, former New York Gov. George Pataki and former Pennsylvania Sen. Rick Santorum.

Two candidates who participated in the first set of GOP debates Aug. 6 in Cleveland were absent Wednesday. Former Texas Gov. Rick Perry dropped out of the race on Friday, throwing in the towel amid poor fundraising numbers and low voter support. Former Virginia Gov. Jim Gilmore was cut from Wednesday's debate because he didn't meet CNN's minimum requirements for participation.

We'll be updating this story with highlights from the CNN Republican debate as it's going on.

Fiorina took the debate's first question, which started shortly after 8 p.m. Eastern. After candidates made their introductions, debate moderator Jake Tapper, CNN's chief Washington correspondent, asked Fiorina whether she thought "hot head" Trump could be trusted "with his finger on the nuclear codes," a reference to a previous remark by Jindal.

"I think Mr. Trump is a wonderful entertainer, he's been terrific at that business," she responded. On the question of whether Trump could be trusted with controlling the country's nuclear codes, she said, "That's not for me to answer."

The mic then passed to Trump, who quickly shifted the focus to Paul, saying the U.S. senator from Kentucky was too low in the polls and shouldn't have been invited onstage. Paul retorted, saying that all Trump has done so far in his campaign is attack people's looks.

Candidates went on to discuss foreign policy at length, touching on the White House's historic Iran deal and the Syrian civil war.

"[Walker] says he would love to play cards with [U.S. President Barack Obama] because he 'folds' when negotiating with Iran," the New York Times' Alan Rappeport reports.

Cruz said that he would "rip to shreds this catastrophic Iranian nuclear deal" if he were elected president.

"If there's anyone up here who would be bound by this catastrophic deal with Iran, they're giving up their core responsibility as commander-in-chief," Cruz said.

On the question of Syrian President Bashar al-Assad, Trump said Obama lacked  "courage" for not ordering military action after the Assad government attacked Syrians and said Congress had some responsibility for the Syrian refugee crisis.

On the topic of religious freedom, Tapper pressed Huckabee about his support for Rowan, Kentucky, county clerk Kim Davis, who was arrested for refusing to issue marriage licenses to same-sex couples due to her religious beliefs. Huckabee previously said Davis' detainment was indicative of the larger "criminalization of Christianity."

Huckabee doubled down on his support for Davis and went on to compare Davis' religious concessions to Guantanamo Bay detainees being allowed to grow beards.

One of the debate's tensest moments came when Tapper asked for Fiorina's response to Trump's criticism of her appearance last week. "Look at that face! Would anybody vote for that?" Trump said of Fiorina in a Rolling Stone article published Sept. 9. Trump later claimed he was talking about Fiorina's temperament, not her looks.

Candidates turned to the hot-button topic of immigration. Many of the Republican contenders said they supported shoring up the U.S.-Mexico border, though they stopped short of offering specific policy plans.

"If we don't seal the border, the rest of this stuff doesn't really matter," Carson said.

As he has previously stated, Trump said he would want to change the 14th Amendment, which guarantees citizenship to anyone born in the U.S. Fiorina responded that to ratify the amendment would require support from three-fourths of the states.

"Santorum says too many Republicans back 'amnesty' for migrants who are in the country illegally," USA Today reports. "Jindal denies that, saying migrants should be required to do certain things before they can stay."

Rubio talked about his immigrant background and his Cuban grandfather, who passed on his love for America to his family. "He taught me that in Spanish," Rubio said. "Because that was the language he was most comfortable in." Rubio also said he viewed current-day immigrants similarly and spoke Spanish to reach them: "If they get their news in Spanish, I want them to hear that directly from me, not from a translator at Univision."

The Trump-Fiorina showdown continued when both candidates called into question the other's business record.

Trump said Fiorina's time as CEO of Hewlett-Packard was a "total catastrophe," adding, "She can't run any of my companies, that's all I can say." Fiorina was fired from Hewlett-Packard in 2005.

Fiorina swiped back, attacking Trump over his casinos having declared bankruptcy. Fiorina accused Trump of running up "mountains of debt as well as losses using other people's money and forced to file for bankruptcy — not once, not twice, four times. ... Why should we trust you to manage the finances of this nation any differently than you managed the finances of your casinos?"

The issue of marijuana legalization took center stage during the debate's latter half. The question over marijuana centered on whether, as president, a candidate would enforce federal marijuana laws, which classify marijuana as a Schedule I drug along with heroin and LSD, in states that have legalized the drug.

Paul said he thought candidates who opposed medical marijuana were hypocritical because they probably smoked pot in the past, to which Bush replied, "Forty years ago, I smoked marijuana."

Fiorina weighed in, saying, "We are misleading young people when we tell them that marijuana is just like having beer. It's not."

"Drug addiction is an epidemic," Fiorina said. Fiorina spoke at length about her own family's history with drug addiction. Her daughter died in 2009 after her "struggles with alcohol, prescription pills and bulimia," Time reports.