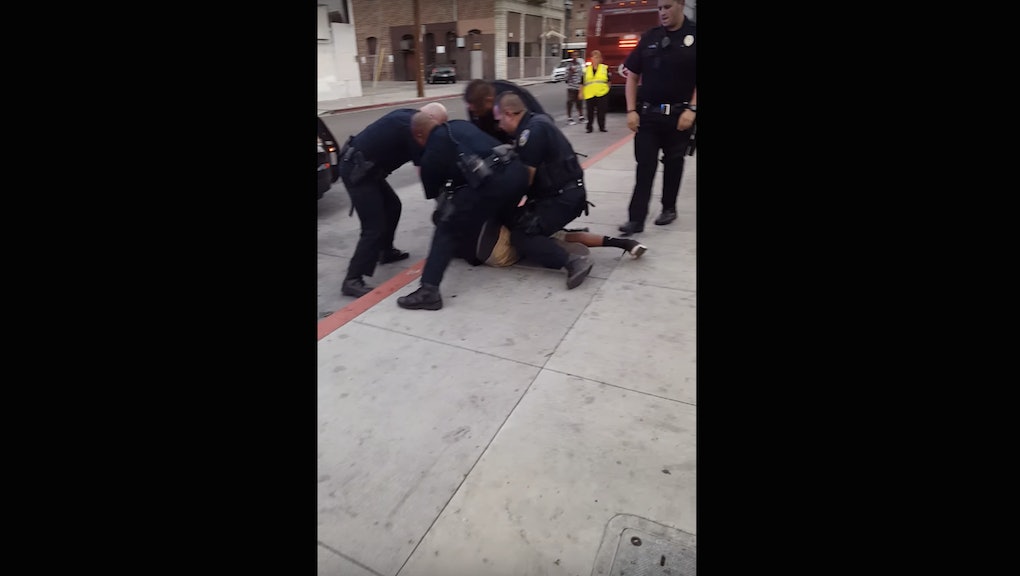 At 6:52 a.m. Tuesday, a 16-year-old in Stockton, California, was told to stop walking in the street by a law enforcement officer, according to the Stockton Police Department. After a verbal altercation between the two, the teenager was beaten, thrown to the ground and arrested by nine officers. The climax of the interaction was caught on camera.

SPD's account of the incident involves the teenager using obscene language toward the officer and refusing to leave the bus lane he was walking in, at which point the officer tried to apprehend the young man.

"He was still in the bus lane, so he was actually trespassing. That's why the officer went over there to legally detain him," SPD information officer Joe Silva told Mic. When the teen resisted, according to Silva, the officer pushed back and the pair struggled over the officer's baton. This part of the incident cannot be seen in the footage available.

The officer calls for backup, and at least seven other officers can be seen arriving in the video to detain the unarmed teenager. They tackle him to the ground, handcuff him and take him away while he cries.

Silva told Mic the teen was "cited to his mother for resisting arrest and for the Stockton municipal code for trespassing." The teen will appear in juvenile court to face the charges.

Silva added that if civilians did not resist arrest, officers would not have to use force. However, because the video begins after the officer has already physically engaged with the teen, it's unclear how the interaction actually began. But based on the footage available and the onlookers' response to the incident, it seems possible there were other factors at play.

"The kid got stopped for 'jaywalking' when he barely stepped out of the bus he was 2 feet away from the sidewalk when the cop stopped him for 'jaywalking,'" Edgar Avendaño, who witnessed and recorded the incident, wrote in a Facebook post with the video. "The cop was telling him to take a [seat] but the teen kept walking to his bus but the cop kept grabbing his arm & the kid took off the cop's hand off his arm so the cop took out his baton & that's when I started recording."

However, Silva suggested, so far, the officers are not internally suspected of wrongdoing. "Everything is under review," he explained. "The preliminary investigation shows they were in the right."

Avendaño posted the video to Facebook shortly after the incident. At the time of publication, it had over half a million views.

Racially motivated police brutality has become a major issue across the United States, extending far beyond the high-profile cases of black men and boys being killed by officers. Black people killed by police are more than twice as likely to be unarmed as white people who die by police force. According to an African American Policy Forum study, black women are often the brunt of police brutality; 53.4% of all the women police stopped in New York in 2013 were black, compared with 13.4% who were white.

And like the teen in the video, black children have often been the target of police brutality. Ten-year-old Taye Montgomery was pepper-sprayed while peacefully protesting with his mother at a rally in Minneapolis in May. In response, Montgomery simply said, "At least I was maced and not shot."