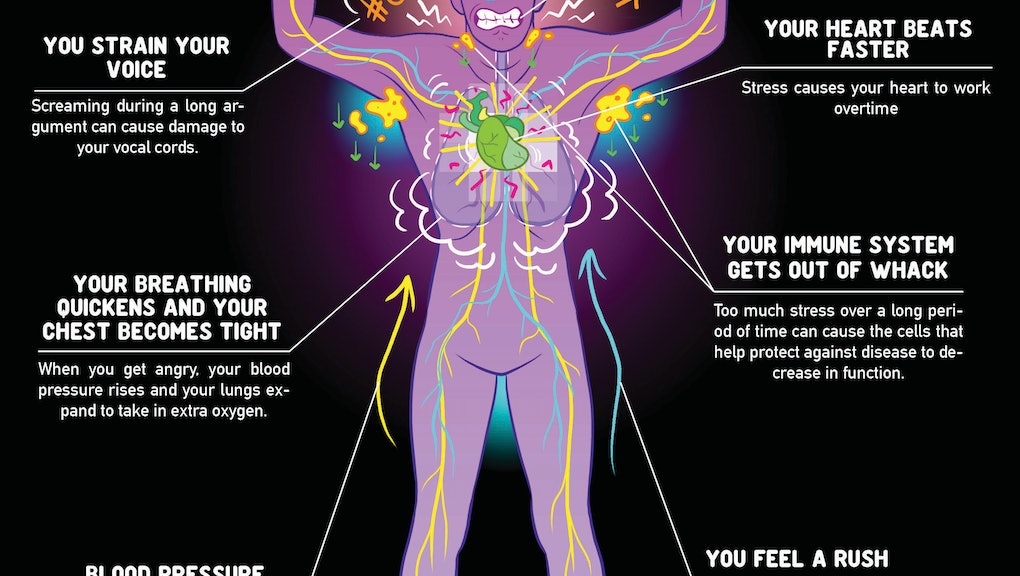 Fights and disagreements are inevitable in any long-term romantic relationship. Anyone who's gotten into a particularly nasty squabble with their loved one knows that it can leave you feeling exhausted and drained. But where do those intense feelings come from, and what physical effects can they have on your body?

Science says that couples who experience protracted relationship stress are at risk of developing health problems like higher blood pressure and cortisol levels, which can lead to a higher risk of developing diabetes, heart attacks and strokes.

The good news is that with a little mindfulness and empathy, most couples can stave off the harmful effects of relationship stress while enjoying all the positive health benefits a happy relationship can bring. So, in the interest of happy coupling, let's dissect what happens to your body after you have a fight with your significant other in both the short and long terms.

In the heat of the moment, stress skyrockets.

While you're in the middle of arguing over who takes out the trash more, a part of your brain called the amygdala activates. This is the same part of the brain that lights up when you see, say, a bear racing toward you gnashing its teeth, causing your body to hit the panic button and send you into "fight or flight" mode. Starting in the amygdala, fight-or-flight causes a chain reaction that leads the adrenal glands to release a dose of cortisol, the chemical culprit behind stress. In fact, one study found that the more criticism you direct at your partner, the higher the levels of cortisol they have.

You feel a rush.

You know that insane surge of energy you get while you're ranting and raving about some trivial topic, like whose turn it is to take out the trash? One study showed that when newlyweds experienced hostility from their partner, they got a surge of epinephrine and norepinephrine — the same hormones released when you go on a roller coaster or feel startled, which produces that head rush feeling.

While you and bae argue your way to the heart of the matter, you may find your own heart quickening. Studies show that arguing spouses often have higher heart rates than those who don't argue as often.

With your heart pumping faster, your blood pressure rises. In fact, while one study showed that marital bliss is associated with better cardiac health, conflict can cause your blood pressures to increase. A short-term spike in blood pressure is no big deal — in fact, it can help your muscles get more blood, thus helping you run faster while your partner is accusing you of looking just a little too long at their former college roommate. But in the long-term, it can lead to damage of blood vessels and weakened heart muscles.

Your pitch changes, and you raise your voice.

"Stop yelling at me!" "But I'm not yelling!" It's a common interaction when things get a little heated between you and your loved one. But even if you don't think you're raising your voice during an argument, you probably are: When your emotions are running high, your pitch changes and becomes higher.

Your breathing quickens and your chest feels tight.

Intense anger can trigger rapid breathing, or a hyperventilation response, which can sometimes make your chest feel like it's tightening up. Conversely, deep breathing can trigger the opposite of the flight-or-fight response, slowing down all the aforementioned nasty effects stress can cause on your system.

You clench your teeth.

When you become angry at your partner, that can manifest itself in the form of muscle tension in your upper body, including your head, neck and shoulders. It can also result in you clenching your teeth (hence the phrase "it set my teeth on edge").

Your immune system gets out of whack.

Contrary to what you might expect, a little bit of stress can actually boost your immune system. But too much stress over a long period of time can lead to declines in the function of your immune system. So if you're in a weeks-to-months-long rough patch with your S.O., all that stress can lead the cells that help protect against disease stop working as well, while cells that promote inflammation tend to spin out of control.

Assuming you and your partner don't have an uber-masochistic Sid-and-Nancy-type dynamic going on, fighting every once in a while is totally normal. And in the wake of a particularly brutal argument, it could also serve to remind you guys why you fell in love with each other in the first place, thus strengthening the bond between you two (especially if it leads to hot make-up sex right after).

The important thing to remember in the heat of the moment? Try to keep calm. A 2014 study showed that people with a greater ability to regulate their emotions and keep themselves calm and collected had higher overall levels of relationship satisfaction. So the next time you feel yourself getting angry, try to take deep breaths and maintain a cool head. Practicing positive communication behaviors like active listening and validating your partner's feelings can curtail the stress response — which can lead to all those health problems down the road.