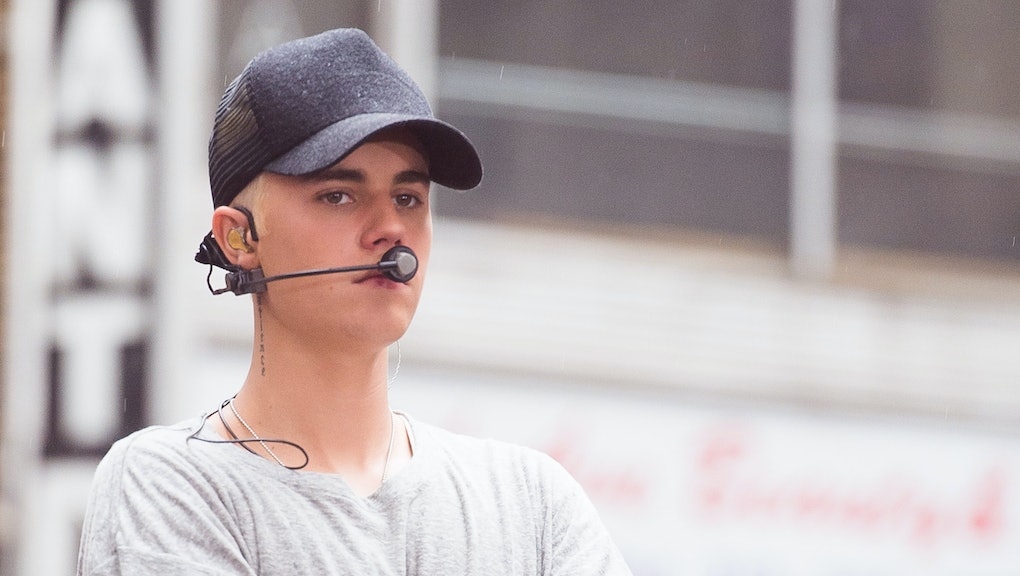 When he releases his next album in November, Justin Bieber will attempt to bare his soul. He should be terrified — and his fans should be too, if they're not already.

"You'll get to hear him really get intimate with things that he went through in his life in the last couple of years, so that people can understand him," Bieber's close collaborator Jason Boyd, better known as the songwriter Poo Bear, recently told Billboard. Boyd described it as Bieber's Thriller. "Big, powerful records that everyone can listen to. This album is so inspirational."

The little we've heard off it so far lives up to this statement. Recent singles "Where Are You Now?" and "What Do Ü Mean?" produced with the help of Skrillex and Diplo, have received an unexpectedly warm reception for their heartfelt, confessional tone and nuanced songwriting.

There's a lot more than music that comes into play when most people talk about Justin Bieber, though. Most pop culture outlets and Twitter users are still dogmatically attached to the Bieber narrative they've been relishing since his egg-throwing, drag-racing hooligan days. Despite the new intrigue his music has been creating, the Bieber bashing continues. Every time Bieber has gotten anywhere close to sharing anything remotely honest or personal in recent weeks, it has had to run through a gauntlet of mud-slinging to reach people.

His album will have to pass through the same. The likelihood it will emerge unscathed, much less appreciated on its own merits, are slim.

Operation Humiliate Bieber: Most listeners have likely never considered Bieber a legitimate musical artist. These kinds of fans likely once approached Justin Timberlake and Miley Cyrus the same way. Asking a listener to suddenly shift gears was never going to be an easy task, but it's proving exorbitantly difficult with Bieber.

Almost every Bieber-related news bite from the past few months was met with merciless treatment by pop culture press, as has been the norm for years. His most recent flub came during a performance on the Today Show last Thursday, Bieber's microphone picked up snippets of him arguing with the show's producers for hovering directly over him with a camera while he was trying to dance.

His two-sentence critique, something the Inquistr explains isn't an "unusual concern" for artists, was framed as a "tantrum" and "fit" across media. It was a misstep many publications seemed to have been thirsting for since his return to the spotlight.

Bieber's tears after performing at the MTV Video Music Awards were a little too endearing to spin into embarrassment for most (though not all). He later explained the moment on the Tonight Show Starring Jimmy Fallon, saying he was overwhelmed by the support.

"I didn't expect them to support me in the way they did. Last time I was at an awards show, I was booed," he said.

That said, Bieber still had plenty of people booing on Twitter.

Or mocking his hair:

Or calling him "gay":

Every huge pop artist has their share of haters, but the ire and mockery that Justin Bieber draws seems far more merciless than any other star. Because he's so divisive and his every misstep immediately becomes a hot tabloid story, even working with him is a borderline subversive act. EDM producers Skrillex and Diplo recognized and relished that reputation while crafting their hit "Where Are Ü Now?"

"We should do a record with Bieber, because one no one would expect it," Diplo told the New York Times in a recent behind-the-scenes video (below). "Whether you like him or not, he's a polarizing figure."

Stop talking and listen. One could say Bieber made his own bed with his behavior. He's had his share of embarrassing fuckups, but so have most bored teenagers. He was young; he's still young. He deserves a second chance, and he's clearly making good.

He's clearly trying to draw people's attention towards the music. Some of it is brilliant; it's been met with varying degrees of success. "Now being 21 and going through some hardships, I think that you can hear that in my vocals," Bieber says in the above video. "You can hear that in the emotion of my voice."

His team recognizes the fact that the only way to get people to stop thinking of Bieber as an embodiment of all that is artificial and disgraceful in the celebrity sphere is by making music. "We knew that the only way this was going to work was if we made it about the music again," Scooter Braun, the man who helped launch Bieber's career, recently told Billboard. "No more sensationalism — if you enjoy the music, thank you, and if you don't, there's nothing more to talk about."

Yet there will always be more to talk about. Tabloids will find it; Twitter users will continue to rehash the same jokes about his sexuality and hair they've been fixated on since he first dropped "Baby" with an opportunistic Ludacris. When Bieber bares his soul on the new record, the amount of ammunition it will provide those determined to watch him fail will be immense, the firefight decidedly brutal.

He won't come through without a few bruises but it's the only way he'll ever be able to change the world's impression of him — whether or not the world is ready.