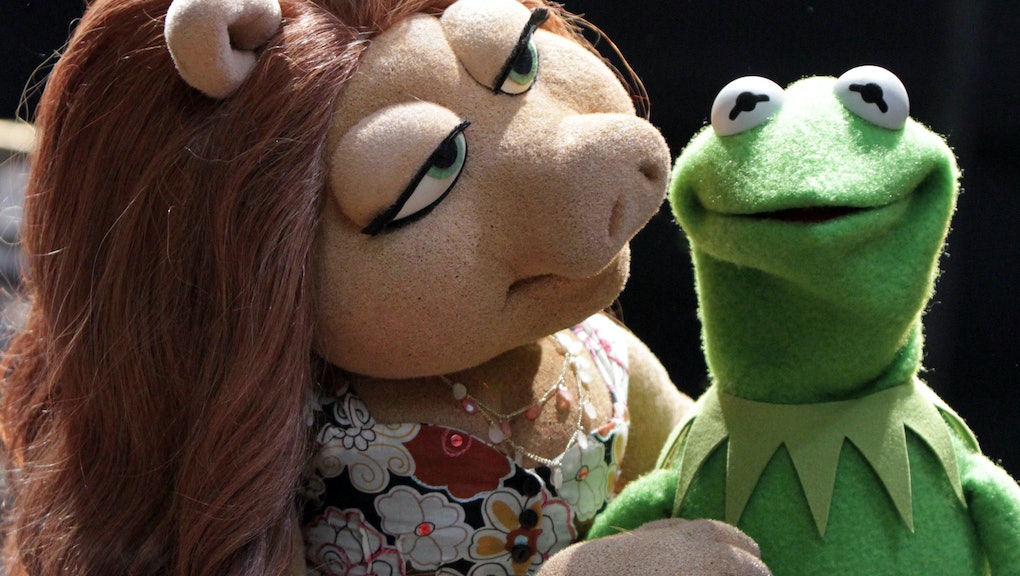 You Can Love the Muppets Without Caring About Their Sex Lives

The Muppets are returning to TV with a new ABC show — but everyone already knows that. For the past two months, The Muppets' PR team has been working overtime, making sure audiences know what the show will be about, who will be in it and what romantic configurations the Muppets will end up in. It's been an absolute mess.

First, we found out Miss Piggy and Kermit had broken up, which is a plot element in The Muppets, as is Kermit finding a new partner in Denise. Then came news that Miss Piggy was rebounding with Josh Groban — who makes cameo in the new series — and Time published an op-ed "from" Miss Piggy about the demerits of monogamy.

Yes, audiences learned a lot about the Muppets this summer; in many cases, too much about the Muppets. This new show is taking Kermit, Miss Piggy and company into decidedly uncomfortable territory — arguably an unlovable one. They're not really Muppets anymore. They're jerks.

Caring about the Muppets' romantic lives is seemingly a natural extension of treating them as real people, not just characters in movies or on TV. We've been doing it for a long time. They've guested on The View, guest-judged Project Runway and appeared on The Colbert Report. In each appearance, there's no gesture toward the reality of the Muppets as controlled by humans. They're treated as realistically as the humans around them.

Nothing about any of that is wrong — blurring the line between character and reality is fun. It makes the Muppets omnipresent in our culture, even when they aren't in a specific project. They're like our national puppets. It's cute.

Less cute is thinking about those puppets bumping uglies.

What's particularly obnoxious about the media meltdown is that it ultimately amounts to free publicity for the show. Kermit and Miss Piggy would never have "broken up" if it wasn't part of The Muppets. Nearly every article about the breakup has dutifully referenced the upcoming series. It's the ultimate viral marketing.

In the aftermath, we've gotten a slew of increasingly silly takes on the split. The New Republic, for instance, called Miss Piggy "a domestic abuser." Again, this is Miss Piggy, a felt pig without any sentience.

It feels like a wet blanket move to call out that the Muppets aren't real. They're our collective inside joke, and at their best, they're tons of fun. This isn't fun anymore, though. A take on these characters' relationship might be interesting were it presented as commentary on the TV show. For example, the star of BoJack Horseman is an anthropomorphic horse. That doesn't stop commentators from writing beautiful pieces about how the show depicts depression.

Instead, the coverage of The Muppets' inciting breakup feels dissociated from reality. Pieces examining Miss Piggy as a feminist character aren't making any greater point about the yet-to-debut show; they're just feeding the Muppet marketing machine. Treating the Muppets like they're real has come to bite media in the ass. Suddenly, commentators are writing takes about why a pig is a domestic abuser. It's surrealism in reality.

A waste of time: Early reviews for The Muppets have not been kind. "Joyless," Forbes calls it. "Disappointing," the New York Times terms the first two episodes. Perhaps worst of all, the Guardian calls Kermit — sweet, lovable green frog Kermit — "absolutely unrecognizable," now an asshole who talks at length about sex.

These beloved characters have been stretched into something they've never been before: jerks. That's not the role of the Muppets. Sure, Statler and Waldorf are crotchety from the balcony, but endearingly so. Miss Piggy is an egotist, but that's hilarious. Making these characters assholes in canon isn't fun, nor is it in creator Jim Henson's spirit. It's also damaging the brand as a whole.

However much a waste of time The Muppets is, the show won't ruin the Muppets themselves. They'll be back for more movies and even small-screen appearances in the future. Hopefully those projects won't derail their characterization. Ultimately, though, that's what they should stay: characters. They're beloved for what they are, not who they're snogging.