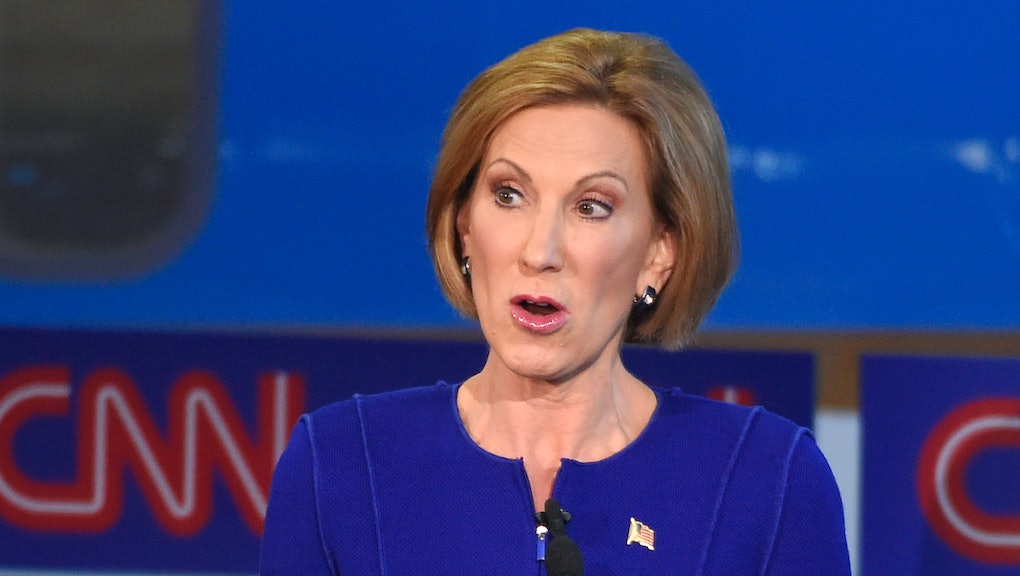 Carly Fiorina is on the rise.

After a masterful performance at the second Republican presidential debate last Wednesday, Fiorina has leapt into second place in the latest CNN poll of likely Republican voters. During the debate, she dazzled the media and the public with her eloquent arguments, nimble retorts and singular ability to tame Donald Trump, the most unruly man on a stage filled with hyper-confident men.

While the debate was a testament to her gift for verbal sparring, it also revealed a tendency for embellishment. The most dramatic moment of the night, in which she claimed that the Planned Parenthood sting tapes include a scene of "a fully formed fetus on the table, its heart beating, its legs kicking, while someone says we have to keep it alive to harvest its brain," was based on a fabrication. Her carefully articulated military plans displayed either ignorance or disregard for current policy under President Barack Obama. Her defense of her tenure as the CEO of Hewlett-Packard as "terrific" based on the company's expansion and growth is based on a remarkable omission of facts that reveal, at least in part, why she was unceremoniously ousted from the company in 2005.

Given the fact that Fiorina oftens holds up her time at HP as the main justification for why she is qualified to be president of the United States, her history there deserves special scrutiny. A number of former HP employees, shareholders, industry observers and family members of the company's founders believe that Fiorina's polarizing style of leadership led to an ill-fated merger that caused the company to fare far worse than many of its competitors, losing half of its value during her tenure.

They argue that her experience as chief executive — a tenure marked by contentious intracompany battles, mass firings and directives to "manipulate" other employees — reveals just what kind of leadership style Fiorina would bring to the White House.

What Fiorina did well: Fiorina's past at HP is steeped in controversy, but there's also a widespread belief that she did some things very well. When Fiorina became CEO of HP in 1999, she was the first woman to head a Fortune 20 company. She was tasked with shaking things up and certainly excelled in that aspect of the job.

At the time, HP was lagging behind its competitors in the tech industry despite decades of success as a technology company since its founding prior to World War II. Fiorina worked on dramatically consolidating the company's sprawling, highly decentralized businesses and placed an enormous focus on efficiency. She also transformed the company's focus on brand and marketing, something that the company had been terrible at for years.

"Carly was hired as a change agent, and in that role she was very successful," Stephen Huhn, a former vice president of marketing and vice president of sales at HP, told Mic. "Carly succeeded in merging its autonomous businesses into a cohesive whole, under a single brand and a clear unified mission to the marketplace."

The defining moment of her status as a change agent at the company arose when she proposed acquiring rival tech company Compaq. She argued that the two companies were a perfect match and would help HP in the markets where it was weakest, most notably in hardware manufacturing. In 2001, she successfully led the merger, which resulted in the company's size expanding dramatically and a massive surge in revenue. This expansion stands at the center of all of the statistics Fiorina recites about how HP grew under her watch. It's also the crux of why so many people consider her controversial.

What Fiorina didn't do well: Fiorina's quest to acquire Compaq won her a lot of enemies. In the eyes of many analysts and investors, betting on the hardware business was a short-sighted deviation from the long-term strategy of focusing on increasing revenue from services which she had previously outlined. She faced fierce opposition from many employees, shareholders and the children of the company's original founders — and fought against them ruthlessly.

The late David Price, who managed communications at HP during her tenure, describes in his 2015 book Apparently So that Fiorina commanded him to deliberately deceive other employees into supporting the merger. (Fiorina's campaign did not respond to a request for comment.)

"Whenever there's a revolution, the army takes over the television stations," Price recounted her telling him. "You control what people see and read... Manipulate them!"

When Fiorina faced resistance to the deal from Deutsche Bank, which held a large number of HP shares, Fiorina allegedly threatened them in a voicemail. As Jeffrey Sonnenfeld, a Fiorina critic and senior associate dean of Leadership Studies at Yale University, wrote recently in Fortune, Fiorina was recorded as saying, "We may have to do something extraordinary" to bring Deutsche Bank on the right side. Deutsche Bank panicked about losing business and reversed their stance in a legally questionable maneuver.

Fiorina established a reputation among some employees for saying whatever was needed to sway an audience or fulfill her agenda, even if it meant making things up.

"She would often make up stories or fabricate answers without worrying about facts or knowledge," Brad Whitworth, who formerly led communication and marketing teams at HP, told Mic.

In a story reminiscent of Fiorina's Planned Parenthood comments, Whitworth said he saw her tell a story about the first big deal HP made with Disney Studios before a huge crowd of employees at a conference in 2000 that was laden with fictional details. "Why Carly would make up her own version of a well-documented story shows her total disregard for facts — which is bizarre for someone who was a history major in college," Whitworth said.

After Fiorina won the shareholder vote for the merger with Compaq by an extremely narrow margin — 51% support — she went about laying off 30,000 workers. While any massive merger naturally results in some painful restructuring, the sheer scale of the firings, along with the fact that they were the product of a merger that many felt was unwise, only made the act more controversial.

Fiorina's strong-arm tactics and big gamble didn't pay off. While many tech companies at the time struggled to make the right calls as the economy went through a rough patch, none of them fared as poorly as HP under Fiorina.

"It's true that many tech companies had trouble during this period of the Internet bubble collapse, some falling in value as much as 27%. But HP under Fiorina fell 55%," Sonnenfeld recently wrote in Politico magazine. "During those years, stocks in companies like Apple and Dell rose. Google went public, and Facebook was launched. The S&P 500 yardstick on major U.S. firms showed only a 7% drop. Plenty good was happening in U.S. industry and in technology."

While Fiorina had a much bigger company on her hands than when she began, profits fell. Finally, in 2005, she was forced to resign by the board.

"On the day that she left, that she was let go from HP, the value of the company increased by several billion dollars — that is as clear a market signal as one gets," Jason Burnett, grandson of HP co-founder David Packard, told Mic. "From a shareholder perspective, it was clear-cut. Her time there was unsuccessful. And in fact Hewlett-Packard has taken quite a while to recover from the decisions that she made as CEO."

The takeaway: Because Fiorina was leading HP at a time of crisis, it's difficult to attribute all of its failures to her. However, there is little reason to think that she was a business visionary who was a pure victim of difficult circumstances — she made ambitious decisions, and there's no measure that indicates that any of them were particularly successful from a business standpoint.

Setting aside the ongoing debate about her chops as a CEO, there is substantial evidence that the very qualities that were on display during her debate performance are in fact deeply intertwined with her leadership style in the business world. She's good at managing brands, she's quick on her toes, she plays fast and loose with the facts, she's willing to be forceful and polarizing. Perhaps she'd be better as a politician than a business leader.