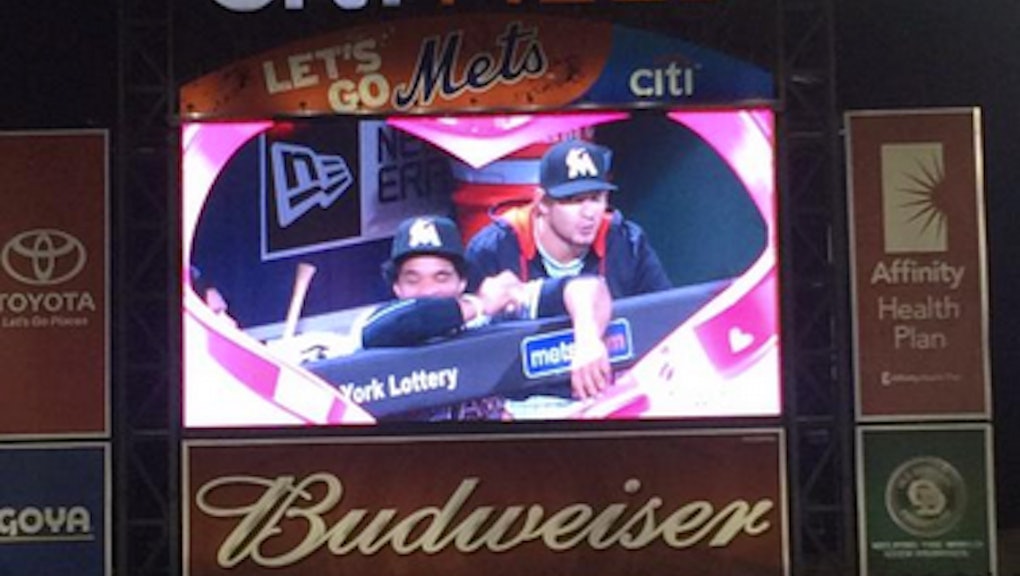 After a full season of protest from a longtime New York Mets fan, the organization has finally decided it will stop putting two men together on the kiss cam at games as a joke.

Etan Bednarsh began tweeting at the team in April at a game against the Philadelphia Phillies, shortly after the season began. The kiss cam, a popular ritual for sporting events, picks people out of the crowd and displays them on the Jumbotron, prompting them to kiss. Though this is usually a ritual reserved for one man and one woman (no matter their relationship status), sometimes the kiss cam operator picks actual players from the visiting team, as they did with the Phillies in April, to poke fun at them.

Gay panic: Bednarsh and others weighed in, asking the team to stop making a joke steeped in homophobia.

"I've been going to games basically my whole lie, and I don't remember seeing this until this season," he said Wednesday on HuffPost Live.

"All I can say is try to picture the same joke, the same dugout with a man and woman and there's no joke. There's nothing funny about it," Bednarsh said. "Tell me what the joke is without getting back to the basic sentence that the joke is the idea of two male athletes kissing, or two men kissing."

As the Mets now approach the postseason ranked at the top in the National League East, a spokesman for the team said Wednesday the kiss cam will continue at home games, but the "joke" of putting two men on the kiss cam will stop.

"We have, on occasion, included players from opposing teams in our popular in-game kiss cam feature," Jay Horwitz, vice president of media relations, said in a statement provided to the Huffington Post. "While intended to be lighthearted, we unintentionally offended some. We apologize for doing so and no longer will include players in the feature. Our organization is wholly supportive of fostering an inclusive and respectful environment at games."

Theyyyy're out: In a breakdown of his kiss cam-related tweets this season, Bednarsh said the practice could be especially damaging in professional sports, an area where gay male athletes still remain closeted. The Mets are one of one of several teams to have hosted a game recognizing its LGBTQ fans in recent years, according to the Washington Blade.

The kiss cam ordeal seems to be uncharacteristic for the Mets who were paid a visit from the league's first ambassador for inclusion, former MLB player Billy Bean, during spring training in March. Bean, who is openly gay, went to camp to train the team and its staff on how to be more LGBT-friendly, CBS Sports reports. Not only did he talk about diversity with the team, but Mets general manager Sandy Alderson invited him to suit up in the clubhouse and take to the field with them.

A few months after training with Bean, the Mets are reacting to calls of homophobia in a responsible manner. "It's no secret sports is still a really rough place for LGBTQ players and fans," Bednarsh said to CNN this week. "I'm really thrilled that we're at this place, regardless of how long it took, and I'm proud that the Mets made this commitment."