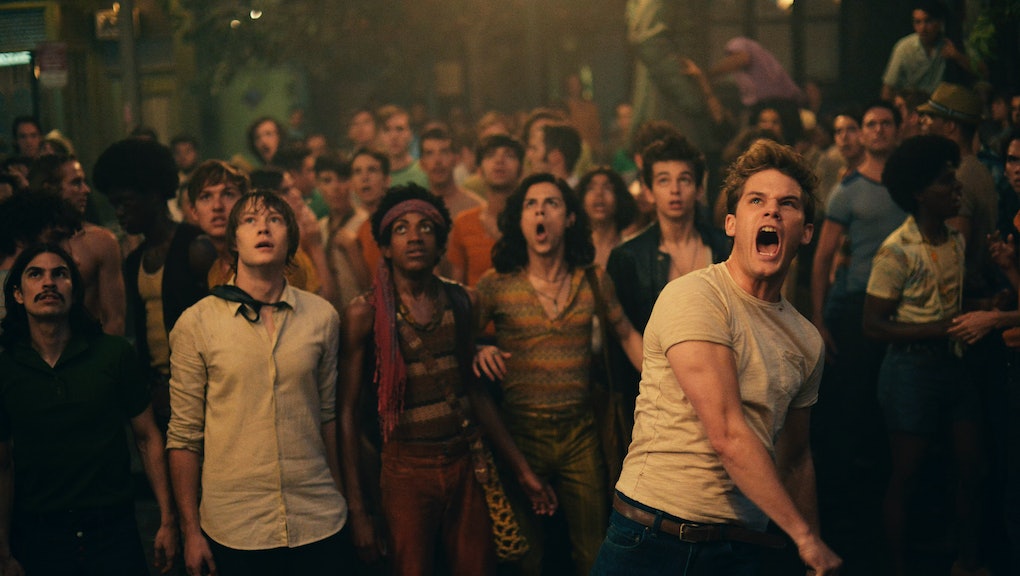 The problem with ‘Stonewall’: It isn’t about Stonewall.

In his 2013 inaugural address, President Barack Obama famously named three major sites of battles for equal rights: Selma, Seneca Falls and Stonewall. The first is a reference to the marches from Selma, Alabama, during the Civil Rights Movement that were depicted in last year's Selma. The second refers to the 1848 women's rights convention held in upstate New York — so far undepicted outside of niche films.

The Stonewall riots, a major moment in American LGBTQ history, occupy a middle ground in the cinematic space. There have been several attempts to make a movie about Stonewall, including 1995's historical dramedy Stonewall and the 2010 documentary Stonewall Uprising. Owing mostly to more limited releases, neither of these films took the title of the definitive Stonewall movie, which leads to the latest attempt in the saga: The Day After Tomorrow director Roland Emmerich's upcoming Stonewall, which hits theaters Friday.

"I don't think there needs to be a definitive Stonewall movie," star Jonny Beauchamp, who plays composite character Ray, told Mic in an interview. "There isn't a definitive World War II movie. There's several. But this is the one we have right now."

While attempting to share the Stonewall story with a wide audience is admirable, it doesn't change that this is an unsuccessful film on several levels. In order to make Stonewall, which isn't really about Stonewall, Emmerich and his team twisted history into knots. In the process, the film minimizes characters of color to supporting roles and focuses on a character with very little to say. (Spoilers ahead.)

Even prior to its release, Stonewall has been a lightning rod for controversy. Almost immediately after the trailer's debut, Emmerich and writer Jon Robin Baitz were accused of whitewashing the story by inserting a fictional cis, gay white male as the lead. One particularly scathing parody took the film to task for seemingly demoting trans characters, women and characters of color to supporting characters in their own story, if not erasing them entirely.

Emmerich and Baitz's response was a simple plea: Wait to see the full movie before you judge. Emmerich's Facebook response emphasized equality, "We are all the same in our struggle for acceptance."

When asked what it was he wanted boycotters to wait for, Emmerich told Mic it was the film's inclusivity. "It's all forms of homosexuality. It's not just a white kid. I wanted to show that this white kid gets educated by a transgender person, and saved in a way."

A primary complaint about the trailer was that a crucial scene — the thrust of the brick into the Stonewall Inn that actually starts the riots — was changed so that the white male lead (Danny, played by Jeremy Irvine) is the inciter, not one of the trans women or people of color. Though it's unknown who exactly threw the first brick, many accounts say it was Marsha P. Johnson, a trans woman who isn't even on the scene in Stonewall.

Cong (Vladimir Alexis), a person of color, first pulls out the brick to throw. Danny takes it away from him, saying violence isn't the answer. When his ex-boyfriend Trevor (Jonathan Rhys Meyers) comes onto the scene and sees him holding the brick, he chagrins Danny, saying that's not the way.

Danny throws the brick, in what Irvine himself described to Mic as "retaliation" toward his peaceful protest-loving ex. "It's the only way," Danny screams to the collected masses. Then, he thrusts a fist into the air. "Gay power!"

There are other motivations that inform Danny's decision to throw the brick, but the movie cuts into its own credibility to have him go from pacifism to aggression in the span of about a minute. The beginning of one of the most important events in the quest for LGBTQ rights is framed as an act of one-upsmanship from ex to ex. It's not just a clumsily written scene, it's trampling over a far more complex history.

That is not unusual for Stonewall, though. Stonewall Forrest Gumps an inoffensive but uninteresting young guy into history alongside fascinating real people, then only tells his story.

Narratively, the beats are built around Danny. Characters of color only exist in relation to Danny. The most prominent, his friend Ray (Beauchamp), is a queer young hustler introduced to the audience with oodles of personality and nerves of steel. Yet he's reduced to a weepy, pining mess multiple times during the film — almost always over Danny. The only major story he gets not related to Danny is his weeping over his other, now-deceased white friend, Justin. There's no room for him to be anything but a victim.

Stonewall doesn't happen in this movie. Stonewall happens to Danny in this movie. Once Danny leaves the Village to go to Columbia University, the film leaves all the other characters behind. There's even an extended epilogue one year later all about Danny's return to Indiana. What about the other characters? 'Don't worry,' the movie says. 'We have a line or two about some of them at the end of the movie.'

Why the intense focus on this one, bland character? According to Irvine, it's because Danny is someone who comes from both Emmerich and Baitz's own experiences. "The writer and director are both gay, and I think there's a lot of Danny in both of them," Irvine said. "That's how you create art like that. A little bit of yourself goes into it."

Using an author avatar is not an uncommon narrative device, nor an inherently negative one. Aaron Sorkin does it in nearly all of his shows. In this particular case, though, the insertion of the white character came at the expense of focusing on the non-white characters around him.

Accounts of events like Stonewall are important. Movies can be our most powerful historical documents. Selma is a great example of that. Stonewall won't be.

During the film's epilogue, Emmerich and his team tell the audience through on-screen text that that Stonewall is dedicated to the "unsung heroes" of the riots. "The more and more I read about it, the more I realized no one knows much about it," Emmerich said. The dedication was a chance to honor them.

That's a lovely sentiment. It would have been even lovelier if Stonewall itself had found time to focus on them in the film itself. Talking with Emmerich and the actors, it's clear everyone had the best of intentions but the tight focus on Danny is a fatal flaw.

Some day, hopefully, those unsung heroes who fought at Stonewall will make amazing protagonists in great films. As Beauchamp said, "People need to hear that people are hungry for these stories. People want to see these stories played out."

Emmerich agreed. "I think there should be five, six, seven Stonewall movies," he said. They're both right: Americans do need to see the stories of those "unsung heroes." Unfortunately, in the case of Stonewall, Emmerich and his team chose to sing about one who wasn't even there.