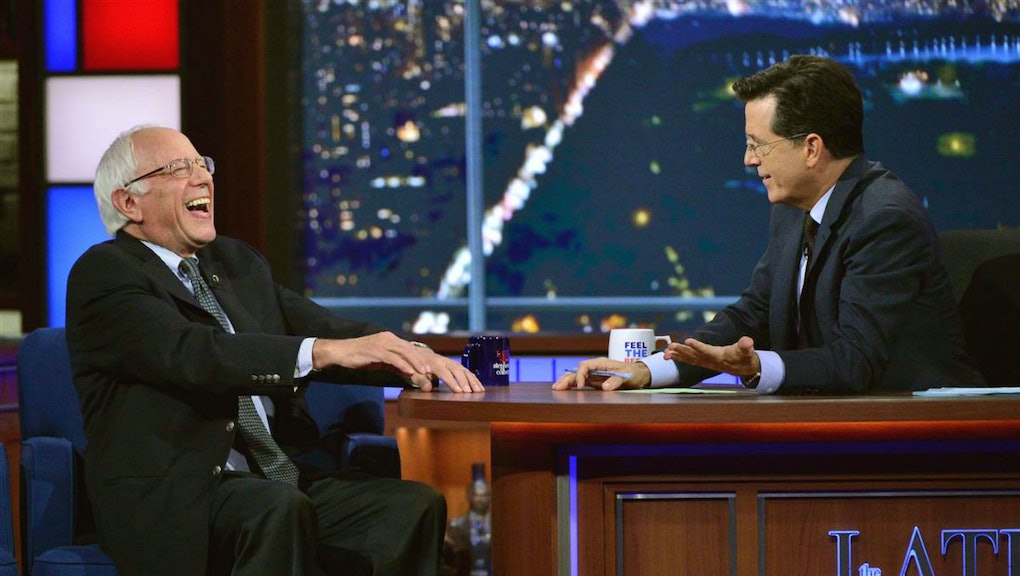 Bernie Sanders — senator, socialist and current Democratic front-runner in Iowa and New Hampshire — took his campaign to late night on Friday, joining the Late Show With Stephen Colbert to talk about his presidential campaign, income inequality and Donald Trump.

Sanders and his host had a lengthy discussion on problems facing the U.S., calling it a "moral outrage that the top one-tenth of 1% today owns almost as much wealth as the bottom 90%, and that 58% of all new income is going to the top 1%." He explained that, while he wanted an entrepreneurial society, Sanders didn't believe there could be one while so much economic power was in the hands of the ultra-wealthy.

Sanders brought up one of his favorite talking points: that many corporations pay nothing or next to nothing in taxes, despite bringing in billion-dollar profits. (Republican front-runner Donald Trump believes corporations pay far too much in taxes.)

Colbert asked Sanders whether he was the "Democratic Trump," noting some commentators had drawn a connection between the two candidates' anti-establishment campaigns and sense of moral outrage. Sanders responded that Trump was preying on "xenophobia and, frankly, racism — describing an entire group of people, in this case, Mexicans, as rapists or as criminals."

"I think that is disgraceful and not something we should be doing in 2015," he added.

Later, Colbert told Sanders that the candidate's small, donor-driven campaign was like bringing "a spoon to a knife fight."

"Stephen, I don't have a super PAC ... because frankly I don't support the agenda of corporate America or the billionaire class," Sanders retorted. "I don't want their money."