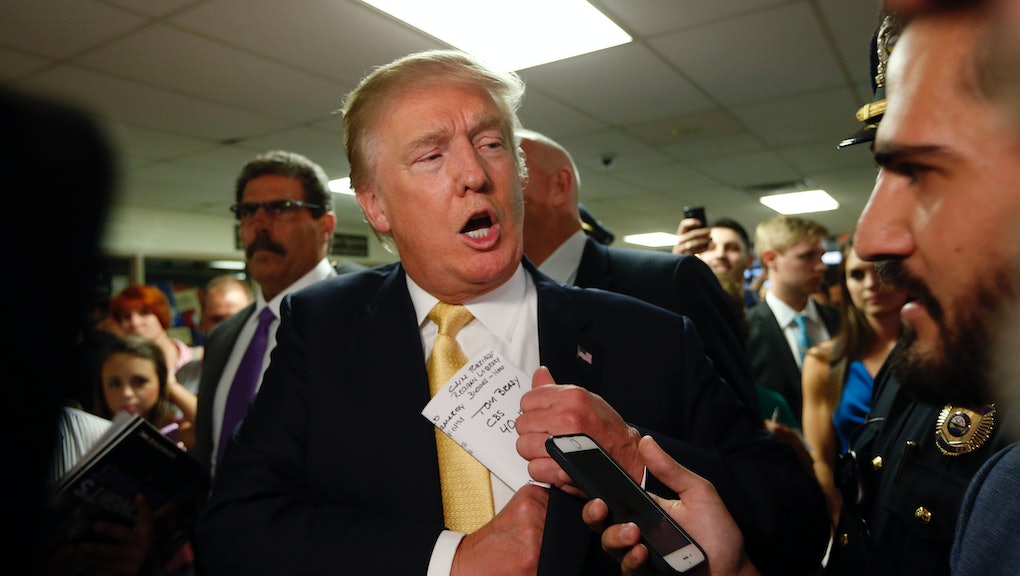 Donald Trump is on the Defensive About His Latest Islamophobic Remarks

On Thursday night, Trump failed to correct an event attendee who said "we have problem in this country. It's called Muslims," alleged President Obama was one, and added that the U.S. has "training camps growing where they want to kill us. When can we get rid of them?" In fact, Trump's response — that "a lot of people are saying that" and he would be "looking at that" — seemed to endorse the man's concerns as valid.

The statement earned Trump an angry reaction from the White House, bad media headlines and call-outs from other candidates like Democrat and former Maryland Gov. Martin O'Malley, who told reporters anyone running for the nation's highest office "has an obligation to correct errors and hateful things when people say them."

Now, he's fighting back. On Saturday morning, Trump defended himself on Twitter by calling the response to his statements the product of a biased media.

Trump said Obama would have thrown him under the bus, too.

He said challenging the man would have interfered with his "right of free speech."

Then he changed the subject back to the religious liberty of Christians.

In perhaps the biggest sign he was taking this seriously, Trump pinned the entire exchange to the top of his Twitter feed as a message to the haters.

This is the opposite of an apology. By casting the issue as a battle over free speech, Trump is shifting the responsibility for his own rhetoric to his supporters. He is also continuing his well-known strategy of never apologizing for anything.

But the problem isn't that Trump didn't censor the man who asked the question. It's that he chose to use his own platform to either agree with the premises of the question or dodge it entirely. The controversy is over what Trump said and did; as Mic's Greg Krieg recently wrote, "Met with a similar challenge, though in even closer quarters, [2008 Republican presidential nominee Sen. John McCain] managed to reject the premise of the question."

Trump, having built his campaign largely around the issue of scurrilous foreigners illegally residing in the country and what the U.S. should do about it (deport them), can't afford to relax his position or running the risk of losing momentum. However, he also can't stand by some of the extreme things he says and does to maintain that momentum. Thus, Trump has to find an alternate explanation for what happened on that stage.

While this latest round might hurt him, Trump has weathered many prior controversies, including referring to two of his supporters who beat a homeless Latino man as "passionate" and getting fired from his own TV show, The Apprentice. This particular controversy may not be the final blow but the accumulated baggage seems to be having an impact.