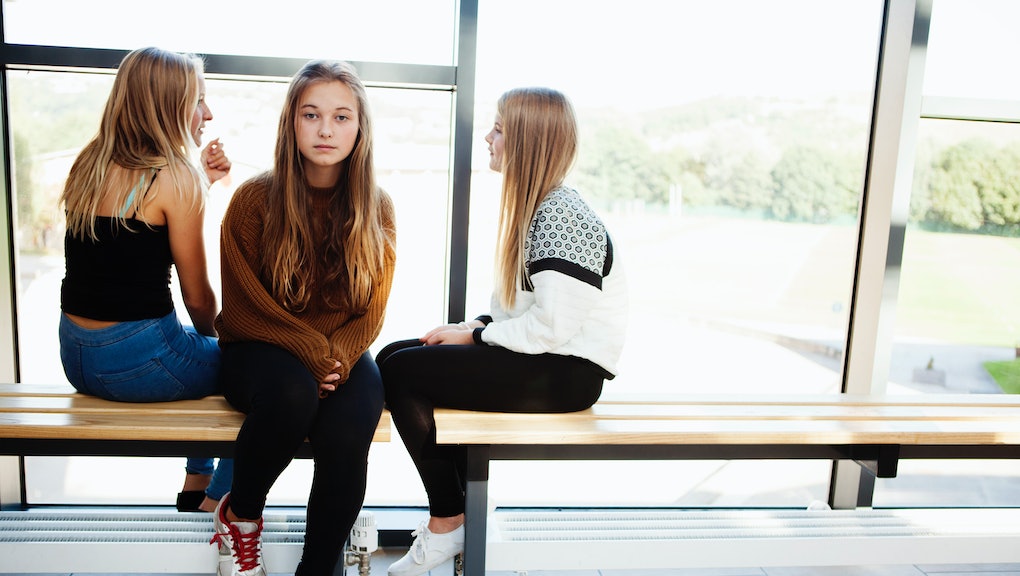 Recently, singer Jewel opened up about her earliest memories of unwanted male attention, which started as early as age 8.

"I had men putting dimes in my hands, saying, 'Call me. It'd be so great to f— you when you're older,'" she told the Hollywood Reporter. Jewel would go on to face sexual harassment again at 18, just as she signed her first record deal.

Though Jewel's story sounds extreme, it is not an outlier. Girls age 8 or younger face sexual comments, sometimes within their own homes. Some shared their stories with Mic.

Angela D.* was a flexible child who loved to do splits. Once, when she was 8, she was contorting in her living room, showing off for some of her family's friends.

"My friend's dad had been watching all of this and when I stood up and the song ended, he pulled me aside and said to me, 'You're going to make some man very happy one day with those moves,'" she told Mic.

Now 27 and living in New York City, Angela says strangers have already begun to compliment her young daughter. They receive comments like "Oh, she's going to be a looker when she grows up."

They make her uncomfortable, and old anxieties bubble up. "She wasn't even old enough to understand what he was saying. It made me choke," she said.

Talking about trauma: That choking feeling is a ripple effect of Angela's trauma almost two decades ago, according to Leah Harris. Harris is a trauma survivor and founder of Shifa Consulting, a firm that trains and educates individuals and organizations on trauma-informed approaches to care. She said that Angela's symptoms show what can happen to survivors of seemingly minor sexual harassment.

Harris defines trauma as an event or series of events that makes a person feel unsafe or physically threatened. One 2000 study said that 60% of women face at least one traumatic event in their lifetime and 20% of those women will develop post-traumatic stress disorder.

Harris believes that the age at which a girl experiences trauma deeply affects a girl's ability to process the event and how it may affect her later in life.

"The younger a traumatic experience happens, the more sort of intense and enduring the effects can be long-term," she told Mic. "Trauma is what women are experiencing long-term."

Several women who spoke to Mic shared stories of sexual harassment and trauma at Angela's age.

One afternoon in third grade, Terri, 47, heard rumors that a boy was going to follow her home from school the next day. She told her father, who said he would watch her as she walked home from school. Unfortunately, her father had watched the wrong route home.

"He followed me and kept kneeing my butt. He would put his knee up to my butt and kick it and he kept saying, 'Boy, girl, boy, girl,' and I didn't know what it meant or why he did it," Terri told Mic.

Alicia Raimundo, 26, remembers a game of doctor with her schoolmates that quickly escalated to the point that other boys her age were grabbing her genitalia.

"It was really traumatic and scary," she told Mic. While the event itself made Raimundo feel unsafe, even worse was the way the adults in her life reacted.

"What was most traumatizing for me was telling the adults in my family telling me, 'Yeah, that stuff happens, you don't tell anybody about it' or 'Oh, it's a game, they don't know any better,'" she said. "Their reaction made me feel ashamed, like it was something I was doing that was bringing on that behavior."

"It's betrayal on top of another betrayal," Harris told Mic. "The young person gets the courage to talk about something like this and it's ignored, that's even more damaging. It's an added layer of trauma or retraumatization."

Not just "fun": "Boys will be boys" negatively affects how girls become women. Puberty is probably one of the more confusing and stressful parts of a person's life, and unwanted touching or gawking during this time can be especially scarring on a young girl's psyche. Harris says many young women internalize experiences of harassment during puberty and take it out on their changing bodies.

"It may come out in all sorts of ways like eating disorders, because they're not able to break out of that cycle," she told Mic. "They experience a lot of body-shaming and body image problems long-term, which makes sense because they are being objectified," she said.

Several women shared stories of harassment that began just as their bodies were beginning to develop, many at puberty's onset, around age 10.

Melissa Baker, 36, hit puberty at 10 and her ballerina body immediately started to become more curvy. "I remember a boy trying to look down my shirt and he was thinking [my breasts] were fake and I was like, 'Leave me alone!' she told Mic.

Katriel, 30, told Mic that her harassment came at a summer camp where she began to develop before the other girls, who teased her. She was 10. "I was bigger than them, so 'different,' and thus mocked and teased and harassed," she said. The harassment included comments about her body as well as grabbing various body parts.

On the first day of fifth grade in a new school, Bernice Bird, 35, wore a brand new accessory: a training bra. When she queued up with the rest of her class to exit the door, she was approached by two boys. "[They] jumped out — one on each side of me. Each boy groped a breast," she told Mic. "The one boy on my left — or right, who remembers — massaged my breast, laughing. The other boy on my right fondled my other breast."

She told her parents when she got home. They reported the incident to the principal, who said, "Well, boys will be boys."

Lily S., 19, was told by a subway harasser she was "lucky he didn't get off the subway and teach me some manners," she told Mic. She was 10 years old at the time.

Nothing invites this: The comments come no matter what young girls wear. Many of the women commented that even when just wearing their street clothes, they were singled out and teased.

One day, while walking home from school, Megan, 29, remembers a pair of adult men yelling at her from a truck. She was 12, and wore a dark burgundy tank top and jeans. They were "saying I was sexy, that I had a nice ass, and making kissing noises at me," she told Mic. "I felt small and uncomfortable. I kept my pace and didn't look back."

Similarly, Erin, 31, told Mic that despite often wearing plain clothes, boys in her class would poke and prod her body, especially her breasts. "My brain tends to block out most of my memories of those days, but my body still holds onto the old reactions," she told Mic. Erin tends to cross her arms to cover her breasts or flinch when touched.

Speaking their truth: Many of the women interviewed tended to downplay the harassment they experienced as minors. Harris said this is normal, but hopes more women speak out, no matter how minor they judge their experience. That minimizing, combined with messages of shame and guilt, lead women not to report harassment.

"There is a tendency to compare traumas, and that's really something to avoid. This is not the trauma olympics and we don't need to put ourselves up against what other people experience," she told Mic. "If this experience made her feel unsafe, then that is her truth and she doesn't have to feel that it's not traumatic enough."

Similarly, Terri experienced unwanted touching from a professor while an undergraduate, which she did not report.

While trauma does continue to affect us for many years, Harris stressed that our past is not our destiny.

"Healing is absolutely possible," she told Mic. "I think there needs to be a lot more networks of support in our universities about how we can cope and share skills that doesn't seek only medication. Trauma affects the mind and the body; it has to be a holistic approach."

"Sharing resources is critical," Harris said. "People need to come out of the closet, and the more of us that do that, there will be more less fear in talking about these circumstances and getting the help to heal them."

*Some of the women interviewed have withheld their full names to speak freely.