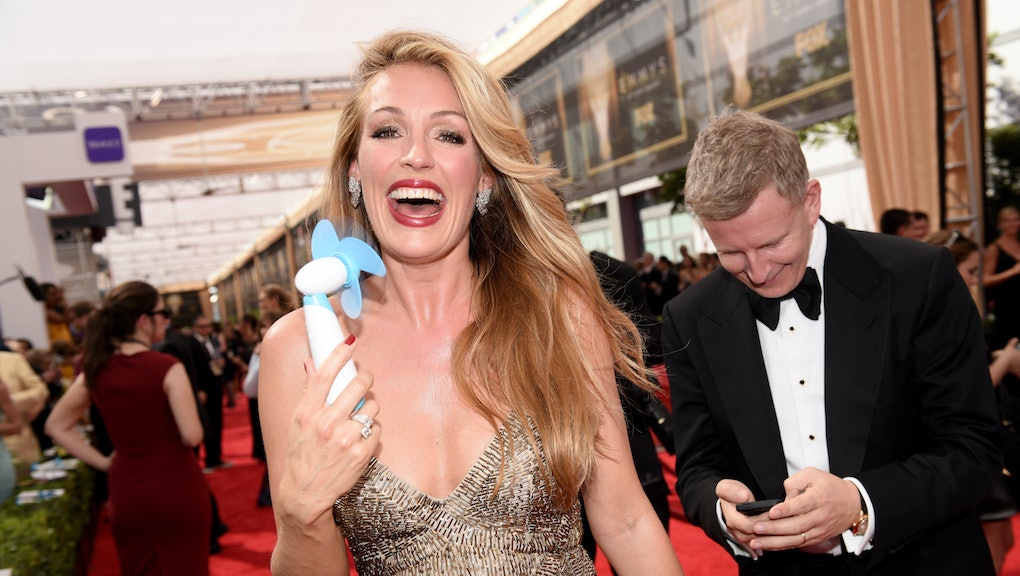 You can lacquer on makeup, douse on the spray tanner and blow out the hair until it's sky high. But you can't make celebrities stop sweating.

That's the wet dose of reality served up at Sunday night's Emmys red carpet, where the parading, typically picture-perfect celebrities were glistening more than usual. We've had hot red carpets before but the Los Angeles weather Sunday night hovered around 97 degrees, the stars were hot — and they couldn't stop talking about it.

"It's just a cruel joke to make us get all dressed up and walk down like this," Allison Janney told E!'s Giuliana Rancic on the red carpet (who later brought her oil blotter onstage with her when she won). Janney called it the "Bikram Emmys."

It didn't help that the red carpet itself was insanely crowded (the claustrophobic might not want to look at this photo) or that the interview booth where stars were grilled was 106 degrees, according to Rancic. The ultimate result of the sweat-fest, however, was a red carpet where the stars talked more about the wet messes they were than the fancy designer dresses they'd been loaned or that their pretended perfect was easily attained.

At an event where artifice typically reigns supreme and makes the "regular" viewers at home feel less than beautiful, any reminder that all that flawless gorgeousness we see is a hard-won facade is welcome. (Except, of course, when the camera zooms in. We could have done without that.)

Hair was wetter than usual.

Foreheads needed to be wiped.

Purses and pockets were filled with blotting devices.

Shirts were soaked through.

Everyone tried comforting themselves with sweat synonyms.

And Ryan Seacrest couldn't stop zooming in on his armpits.