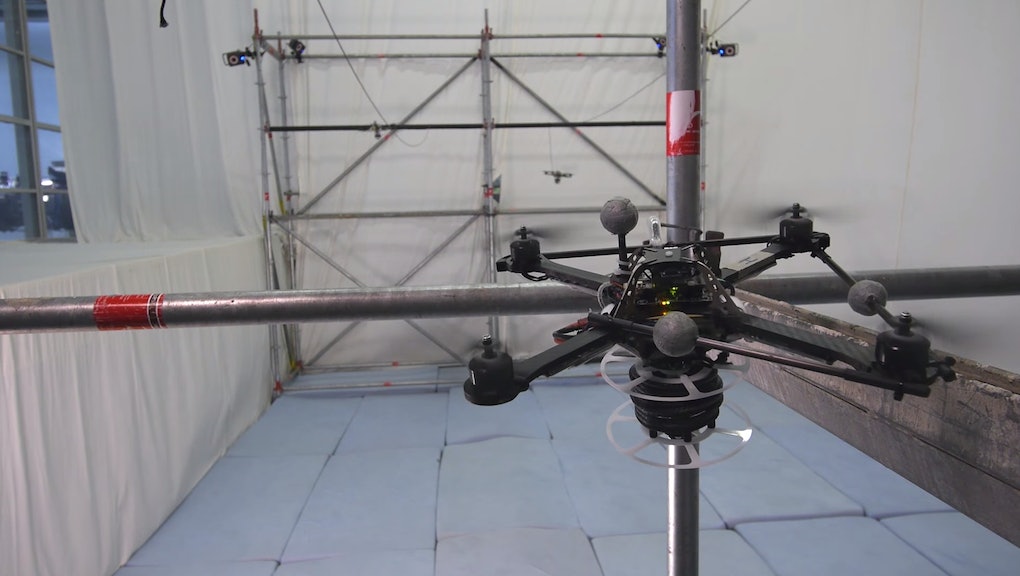 Watch These Three Drones Build a Bridge You Can Walk Across

We've seen little flying drones carrying cameras and guns, shooting gorgeous video and crashing the White House lawn. But now they're carrying spools of rope, and they're on a mission to build.

For the first time, a small flying squadron of drones has built a structure stable enough to stand on. A team of scientists at the architecture and design university ETH Zurich programmed the flying team of self-piloting drones as part of a program to use drones for construction projects.

The copters start out by scanning the existing structure — the scaffolding on either side of the room was set up by human hands, and the team manually adjusted the robots' code to account for the spacing.

"In order to be able to design tensile structures that are buildable with flying robots, a series of computational tools have been developed, specifically addressing the characteristics of the building method," Federico Augugliaro, one of the researchers who built the drone system, wrote for the release of the video. "The design tools allow to simulate, sequence, and evaluate the structure before building."

Once they have their tasks, the copters automatically get to work maneuvering, weaving and knotting the rope bridge together using 300 feet of rope, fed to the drones via small spools on their back. As they slice through the air, fastening and threading the rope, no human interferes with their work once.

Once the bridge was complete, the bridge was strong enough to carry the research team safely across. This kind of structure could be built at any height, and could be useful for emergency situations or at construction sites, where drones are already making their way into everyday use for surveying purposes.

Robots can build way more than rope bridges. Not to be outdone by the flying team of buzzing drones, a Dutch 3-D printing company is gearing up to use a 3-D-printing robot to build a steel bridge over a canal in Amsterdam.

Three-D printing startups, drone companies and futurists imagine a world where these kind of robots build houses, streets and buildings all on their own, with a small group of remote programmers and maintenance staff replacing hard laborers and construction workers.

Were John Henry around today, he'd have a hell of a competition on his hands.

Watch the full video of the bridge construction test below: