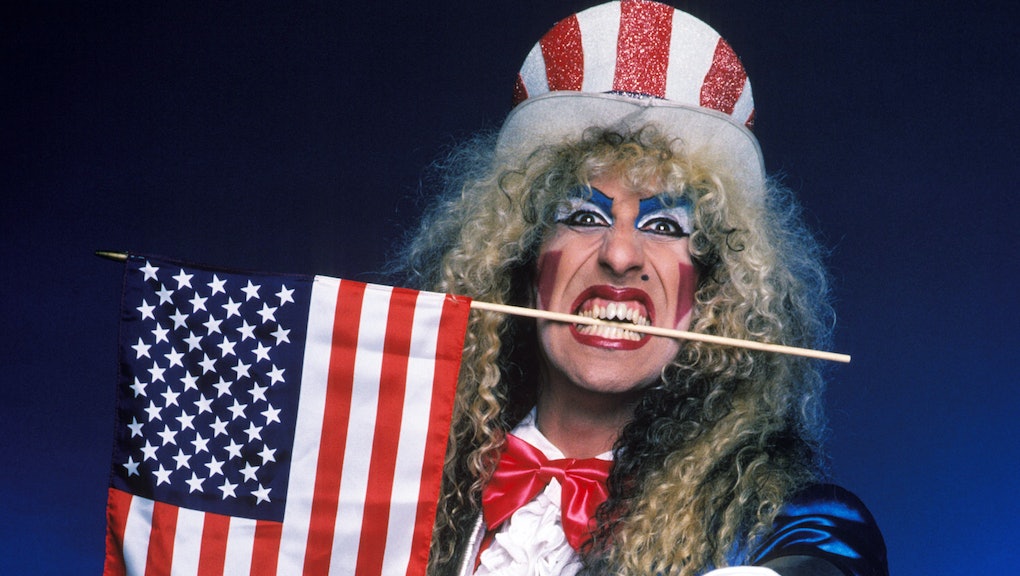 Thirty years ago Friday, Twisted Sister frontman Dee Snider stepped in front of the most sober audience he has likely ever performed: the United States Senate. He appeared to talk about his song "Under the Blade."

Tipper Gore, Al Gore's then-wife, had organized a committee of "Washington wives" calling themselves the Parents Music Resource Center to stem the "indecent liberties" performers were taking with their listeners. Gore had singled out "Under the Blade" as "encouraging sadomasochism, bondage and rape." Snider agreed to appear at the 1985 Senate hearings to clear his name.

"[T]he words in question are about surgery and the fear that it instills in people," Snider said in his opening statement. "As the creator of 'Under the Blade,' I can say categorically that the only sadomasochism, bondage, and rape in this song is in the mind of Ms. Gore."

These Senate hearings, which stretched from Sept. 19 through Nov. 1, eventually led to the ubiquitous parental advisory labels being slapped onto almost every worthwhile '90s album. However, they didn't get there before one of the most ludicrous comedy of errors in the history of music played out on the Senate floor. Had Snider, along with fellow artists Frank Zappa and John Denver, not railed so eloquently against the PMRC's censorship proposals in hearings, we would be facing a far more totalitarian music industry today.

The aims of PMRC: The PMRC's main goal was to create an album rating system similar to that of Hollywood's G, PG, PG-13 and R scale. However, the PMRC wanted music to carry ratings specific to the content. "X" would mark albums with overtly sexual content, "D/A" would signify drug and alcohol references and "O" would point out occult themes (the Satanic Panic was still a very real fear). The PMRC made a list pointing out 15 songs, termed the "Filthy Fifteen," that contained these characteristics. It included Twisted Sister's "We're Not Gonna Take It," Black Sabbath's "Trashed" and Prince's "Darling Nicki."

"As parents and as consumers, we have the right and the power to pressure the entertainment industry to respond to our needs," Gore wrote in her 1987 book Raising PG Kids in an X-Rated Society. "Americans, after all, should insist that every corporate giant — whether it produces chemicals or records — accept responsibility for what it produces."

Though Gore insisted the PRMC did not promote censorship, some of its goals edged dangerously close. The PMRC intended to prevent records with explicit covers from appearing on shelves where children could see them; it also allegedly planned to pressure radio stations and record companies from dealing with objectionable artists.

Snider, Denver and Zappa dealt with each of the charges during the hearings. In the most unexpected display of rhetorical prowess, they tore them into shreds.

Censorship is a slippery slope. Snider's testimony was short and to the point: The labeling system the PRMC proposed would more likely result in a form of "character assassination" for the artists branded, rather than a way to save the children. Denver, an all-American frontier songwriter whom many felt might agree that the country should be cracking down on smut artists, instead surprisingly agreed with Snider.

"My song 'Rocky Mountain High' was banned from many radio stations as a drug-related song," Denver told the Senate. "This was obviously done by people who had never seen or been to the Rocky Mountains and also had never experienced the elation, celebration of life, or the joy in living that one feels when he observes something as wondrous as the Perseids meteor shower on a moonless, cloudless night."

It was the "America the Beautiful" of free speech rhetoric.

"Obviously [it's] a clear case of misinterpretation," Denver said in summation. "Mr. Chairman, what assurance have I that any national panel to review my music would make any better judgment?"

Zappa's testimony was, by far, the most vitriolic of the three.  He criticized the PMRC's methods for being unduly extreme and blamed them for distracting from much bigger issues in music, such as the country's ailing music education system.

"The methods [the PMRC] propose have several unfortunate side effects, not the least of which is the reduction of all American music, recorded and live, to the intellectual level of a Saturday morning cartoon show," he said. "If, as a parent, you believe [children] should be exposed to something more uplifting than 'Sugar Walls,' support music appreciation programs in schools."

In the end, the PMRC succeeded in making a deal with record companies to apply the present day catch-all "Parental Advisory Explicit Content" sticker to records. The deed may have been done before the hearings even began. However, as anyone who managed to get their hands on a copy of the Slim Shady LP as a kid knows, it hardly stopped artists from recording — or kids from listening to — explicit records. If anything, it helped turn more listeners on to heavy metal.

It hardly damaged the artists' careers, either. In a recent Huffington Post article, Snider spoke fondly about the hearings, saying they gave him an opportunity to present himself as "a fairly intelligent, sentient human being."

"My arch nemeses Al and Tipper Gore are long divorced, while this Oct. 23 my wife Suzette and I will celebrate our 34th wedding anniversary," he writes. "You're damn right I'm bragging. I wasn't throwing stones at their glass house. And I can proudly say for the last 30 years, I have stood by, lived and represented every single statement and claim I made in my speech that fateful September day."