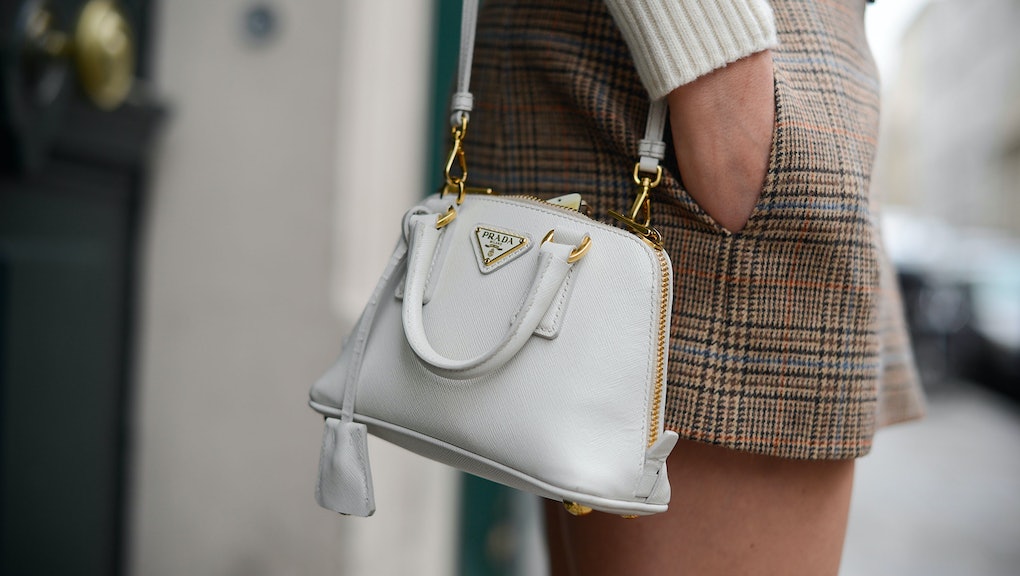 The Single Most Important Innovation That Women's Clothing Needs

Oh, pockets, we love you so.

But the problem is you're not in our pants, dresses and skirts. Not enough of them, at least.

Why don't women's clothes have those precious pockets? Women obsess over pockets in clothing precisely because those practical inclusions are so rare. Historically, few dresses and skirts included pockets as part of the default designs. Even women's pants tend to skimp, either with no pockets at all or tiny non-functional ones.

As one dude commented in a BuzzFeed experiment, in which men tried on women's styles, "OK, are all girl jeans, are they as useless as this? Because these pockets do nothing."

The tiny pocket norm (or utter lack of pockets) is rooted in history. Over the centuries, women's clothing did contain pockets in the form of discrete, wearable pouches. But around the 1800s, the trend for women's clothing turned much sleeker, modeled after ancient Greek goddesses, and internal pockets were cut out of the designs.

"If I were to interpret [the change], it comes down to, 'You don't want this functional item. It's not traditionally feminine, it's not fashionable,'" fashion historian Elizabeth Morano, a professor at Parsons School of Design, told Marketplace.

Fashionable has almost long trumped convenience — in fact, it often seems predicated on being inconvenient. From teetering high heels that are only good for sitting, to dresses so tight we can't ascend stairs, to shirts so low we can't bend over in a board meeting, what's attractive for women's clothing often seems inversely correlated with how impractical it is.

"I don't think women are marketed to as people who need functionality in clothes," Debbie Baer, the co-founder of new clothing line The Willary, told Mic. "[Designers are] looking at cutting costs and making your clothes as skinny as possible, so the first thing to go is the pockets."

The Willary, which is currently being funded on Kickstarter, is producing several items of clothing — pants, a shirt and a utility vest — that help address the "burdens in women's clothing," as Baer calls them. That includes the urgent need for pockets.

Replacing the purse burden: Consider the iPhone, a piece of technology that's supposed to be most functional item we've got. When the iPhone 6 Plus was unveiled last year, plenty of people objected to "the unpocketability of the phone, particularly by females," as author Tanya Basu put it in the Atlantic.

"We [women] know clearly we need pockets to carry technology and I think it's expected we are going to carry a purse," Camilla Olson, founder of a functional women's clothing company, told the Atlantic.

When it comes to fashion items that burden rather than ease women's lives, the purse is the pinnacle. Its existence for women can be traced back to the disappearance of pockets, when women's fashion turned instead to "reticules" and eventually handbags.

Over the centuries, thanks to the near-universal lack of pockets in women's clothes, purses have become the literal manifestation of femininity and womanhood.

When writer Julia Felsenthal chronicled her "breakup" with purses in an essay for Elle earlier this year, she put it this way: "I retired the bag and embraced the reality that I am a very low maintenance, un-lady-like person."

But in choosing to use pockets exclusively, she noted, she feels liberated.

"Lugging around a purse for anything but a special occasion has come to feel nearly as unappealing as wearing a corset or binding my feet," she wrote. It's a telling comparison: Corsets and foot binding are the height of impracticality, cumbersome wardrobe requirements for women that limit their movement and daily activity.

The feminist case for pockets: That's why Baer of the Willary created her clothing line's pockets with the iPhone 6 Plus, and other devices, in mind.

Baer founded her line on the core principle that all women's clothing should be flexible and functional, and the belief that women having clothing they can use is a basic fashion right. Dream clothing, for lots of women, has to do with making their lives easier in some way.

"We love [pockets] because our lifestyles are changing," Yehua Yang, co-founder of a women's performance brand called Pivotte, told Mic. "Especially now there's a lot of talk about women in the workplace and the idea of power and dress, women are becoming more active in their lifestyles and work schedules and mom schedules. We need pockets to survive all that."

We're getting more of them thanks to increasingly popular "athleisure" clothes, which by their very nature favor function over all else (and often include very handy pockets).

But more significant is the rise of new female designers and brands that are putting women first, from the Willary and Pivotte to romper-maker Jolie Coquette.

"I think there's been a change in women speaking up for what they want," Baer told Mic. "Women are more vocal than ever on what they appreciate and want in clothing, and what they want is pockets. I think it's a very 21st-century female thing."

So outspoken women = pockets. Makes perfect sense, if you ask us.