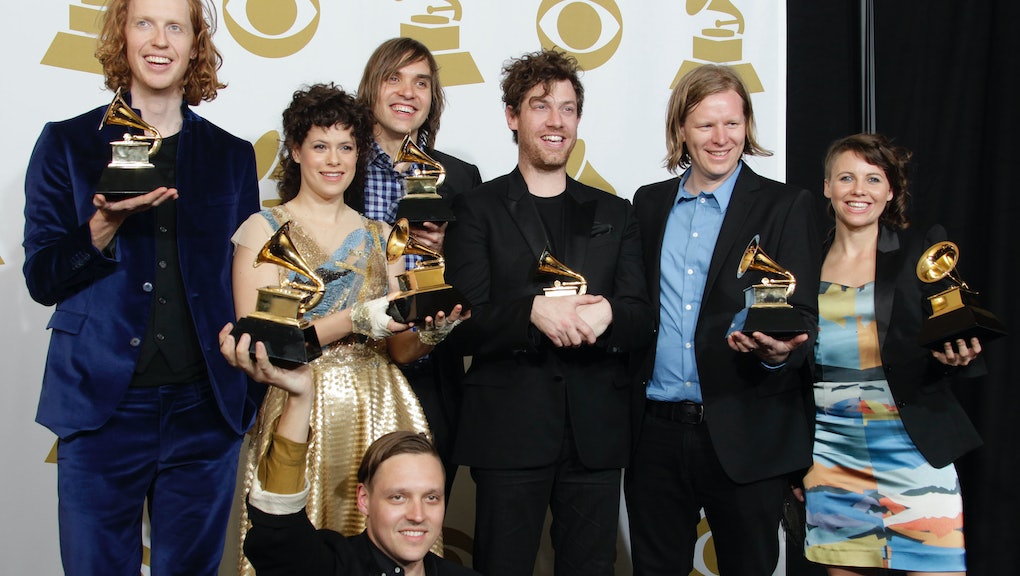 Indie powerhouse act Arcade Fire is gearing up to release its long-awaited music documentary, The Reflektor Tapes, which hits theaters on Wednesday.

Our first glimpse of the documentary comes via Billboard with an exclusive look at a live rendition of "Here Comes The Nighttime." The cut captures Arcade Fire frontman Win Butler and company in slow motion frames and black-and-white footage, which helps underpin the band's larger-than-life persona.

The documentary follows the band through Reflektor's planning and recording phases, and trails the musicians through concerts, recording and musings in Jamaica, Haiti, Canada, the United States and England.

According to John DeFore of the Hollywood Reporter, "The film conveys the sense of hanging out with a band despite the fact that we almost never see them talking to us; a mood of creative ferment overrides any detailed narrative, and although its time period includes a massive tour for the group's latest album, this is definitely not a concert film."

But like the genre it portrays, striving to be alt could be this documentary's greatest pitfall.

"Certainly not the least pretentious music doc out there, the film spends a long preamble fading in and out of interview clips, dropping each one before the unidentified speaker has said anything of substance," DeFore writes.

For more info on screening locations and tickets, head here.

Arcade Fire fans will also be pleased to learn that a deluxe edition of Reflektor is slated to surface on Sept. 25. Also dubbed The Reflektor Tapes, it boasts five previously unreleased tracks and a remix of "Flashbulb Eyes."

The cannon will see physical release on Oct. 16. In the meantime, check out the tracklist below. Two of the cuts, "Get Right" and "Crucified Again," are already available for streaming via Tidal.