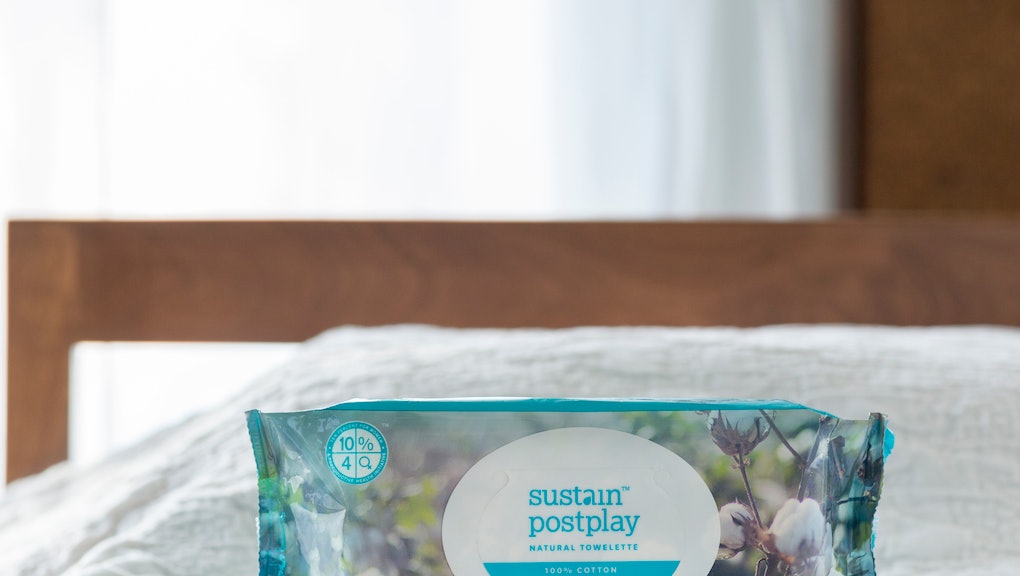 When it comes to post-sex cleanup, those who get ejaculated on (or in) can find often find themselves in a (literally) sticky situation. Do you get rid of it with a towel? Some Cottonelle TP? That old AC/DC T-shirt at the bottom of your closet? Or do you opt for the moist luxury of baby wipes?

However you typically confront this conundrum, a sustainable sexual health company wants you to know: You're doing your post-sex cleanup wrong.

Sustain, a company that specializes in natural condoms and lubes, is now offering its customers a fresh alternative to the cleanup methods of yore with its new Post Play wipes. They're exactly what they sound like: pre-moistened wipes, specifically designed for post-sex cleanup.

When asked what makes Post Play Wipes different from, say, straight-up baby wipes, Sustain's co-founder and CEO Jeffrey Hollender told Mic that one key difference is in the material. "Most wipes are made of paper pulp," he said. "Since Sustain's wipes are made of 100% cotton, it means that our wipes are softer than most other wipes on the market" — which means they'll ostensibly feel better on your bathing suit parts.

While some people use baby wipes to clean up after sex, some of them contain chemicals like glycerin, which, when introduced to the vagina, can potentially trigger yeast infections and bacterial vaginosis. Fragrant baby wipes and other feminine hygiene products have also been found to cause vaginal irritation.

Sustain seeks to differentiate itself from the market by swapping out chemicals and preservative for nutrients such as Shea butter, aloe vera, organic honey and lavender. So for those who want their junk to smell like the inside of a Bath & Body Works, here's the uniquely botanical semen cleanup experience of your dreams.

No niche too small: The wipes sound silly — but they're actually solving a common problem. The topic of post-sex fluid removal is rarely openly discussed. But if you've ever had sex, it's a universally relatable topic, regardless of your sexual orientation or whether you use a condom. Mic's EJ Dickson tackled the issue of post-sex cleanup  earlier this year, finding that millennials are employing a wide range of makeshift cleanup techniques to take care of the problem.

From having sex on your period to using lubrication to experimenting with various food items (which, let's be honest, is probably not a great idea from a personal hygiene perspective), sex can often get messy. In fact, if you're not at least leaving some sweat on the sheets, you're probably doing it wrong.

So the next time you find yourself facing this problem after sex, don't guiltily sneak off to the bathroom to get rid of the evidence. Also, don't reach for the baby wipes, because who really wants to be faced with a box that has a picture of an actual baby on it so soon after having an orgasm? That's just awkward.