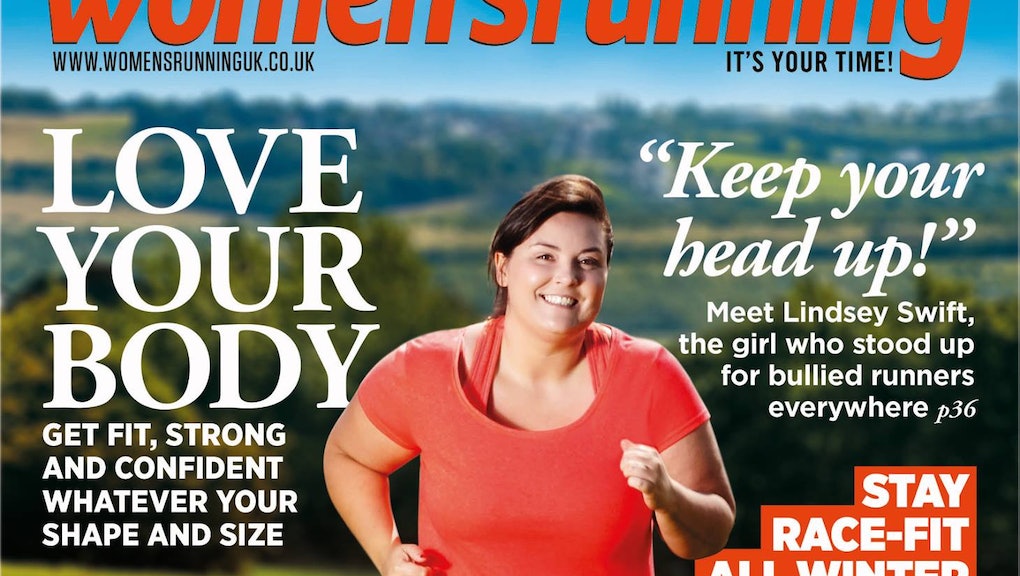 Women's Running UK has swapped out the typical fitness model for its latest cover, and is instead featuring a plus-size runner. Oh, and she's not a model — she's a regular 26-year-old woman who faced bullying because of her size, and fought back with body positivity.

Lindsey Swift, who is a U.K. size 18 (a U.S. size 16), started getting into running this year. In August, she was out running with her boyfriend when a man driving by heckled her with "fat jokes." Instead of being bullied off the sidewalks, Swift posted an open letter in response that quickly went viral.

"Normally I don't get militant about these things, idiots are idiots," Swift wrote. "However, I can see why comments like these might put a person less confident than me off from running, and that is shameful. Everyone starts somewhere."

"Let me make one thing very clear, I am not ashamed of my body," she said. "It has never stopped me from doing anything I want."

Shaming over bodies: Swift's response spoke to so many, unfortunately, because it's an experience numerous others have faced. In tandem with its new cover, Women's Running UK posted a poll asking readers if they've faced the same situation — within hours, the magazine was overwhelmed with responses.

"[We] were shocked by just how many of you have experienced this..." the magazine wrote on its Facebook page Tuesday.

Fat-shaming isn't limited to running, or even exercise. Judgment of people's bodies is all around us, both overtly and subtly, when we're critical of those who don't fit the strictest mainstream body ideals — and blindly throw damaging stereotypes and myths their way.

One myth: that heavy people don't exercise or aren't interested in fitness. Oh, and that they don't have the kind of bodies that are worthy of a magazine cover.

Seeing all bodies represented: That's why magazine covers are so powerful. Showcasing real, positive representations can work to counter stereotypes, and also give confidence to those who don't see themselves represented enough.

Back in July, Women's Running magazine accomplished both of these goals by putting 18-year-old Erika Schenk, a runner and plus-size model, on its cover.

"There's a stereotype that all runners are skinny, and that's just not the case," Jessica Sebor, editor-in-chief of Women's Running, told Today.com. "Runners come in all shapes and sizes. You can go [to] any race finish line, from a 5K to a marathon, and see that. It was important for us to celebrate that."

Now another running magazine for women is doing the same, proving that one of the most powerful ways to counter body standards is to show how beautiful an alternative can be.

A magazine with a plus-size woman, who's not a model, who isn't afraid to stick up for herself and speak out? Those are the kind of covers we want to see.