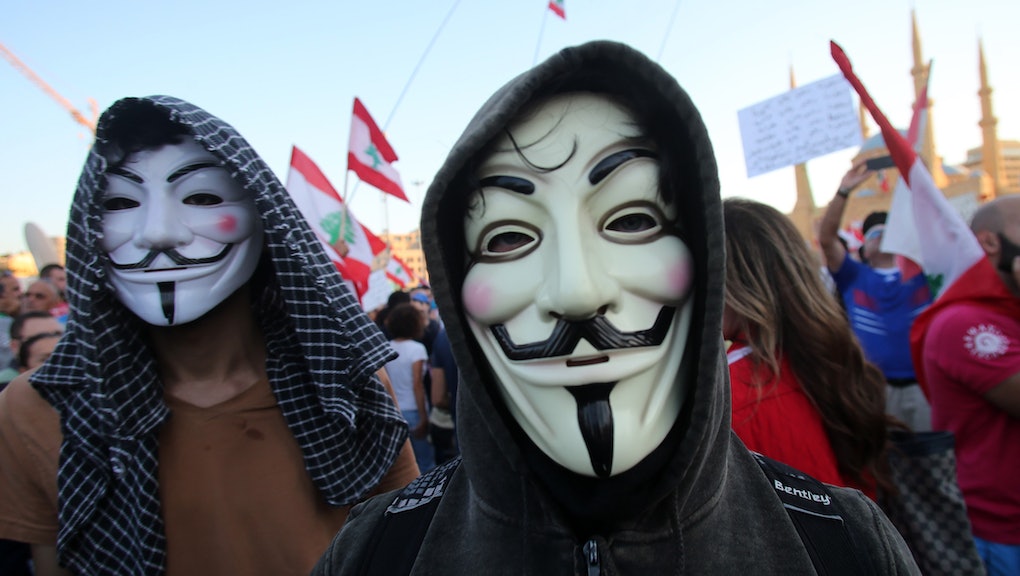 The hacker group and collective Anonymous, known for targeting Islamic State, antagonized the terrorist network on Sunday when they posted a tweet saying they were considering selling G-strings and thongs with the Islamic State group flag emblazoned on them.

"Some of us within Anonymous are currently engaged in a cyber-war with ISIS. Most of the stuff which we have done is practical in nature," one of the contributors to the Anonymous Twitter account @GroupAnon, known as Backslash, wrote to Mic.

"Sometimes, however, we like to annoy them in other ways by mocking them, making memes of them, etc," Backslash shared. "The whole thong/G-string idea was something which we thought would be funny, and would probably annoy ISIS. We never intended to actually sell the lingerie, although it's been more popular than we had expected, so who knows..."

The hacktivist group has trolled the terrorist network in a number of different ways previously, but this is its first lingerie attack. "We enjoy trolling," Anonymous' Twitter biography states, followed by several anti-Islamic State hashtags, which includes #TrollingISIS, in keeping with the G-string post's sentiment.

"We want accountability," an Anonymous member wrote to Mic regarding an online attack in June.

The online collective has waged digital attacks against both Islamic State and countries known to financially support the terrorists. Anonymous often employs Distributed Denial of Service attacks where they inundate websites with traffic until the pages ultimately crash and come down. Anonymous also frequently releases mass lists of thousands of social media accounts they believe are associated with the terrorists, many of which are subsequently shut down.

"We're locating a lot of the Islamic State's websites and Facebook or Twitter [accounts] or blogs," Lara Abdallat, a member of Anonymous-affiliate Ghost Security, told Mic. "We can locate and target [them], and we work on closing them down because they share terroristic information." The affiliate hacktivist group has shared sensitive and important information with United States law enforcement, such as the CIA, in the past.

In an Anonymous video statement posted to YouTube in February, the group said, in no uncertain terms, they were targeting the extremist group: "ISIS, we will hunt you, take down your sites, accounts, emails and expose you ... You will be treated like a virus, and we are the cure. We own the Internet. Remember — the terrorists that are calling themselves Islamic State are not Muslims."

"One thing's for sure, however," Backslash said. "We're never gonna give up on fighting ISIS, and we're never gonna let our supporters down. You see, unlike ISIS, we're no strangers to love."