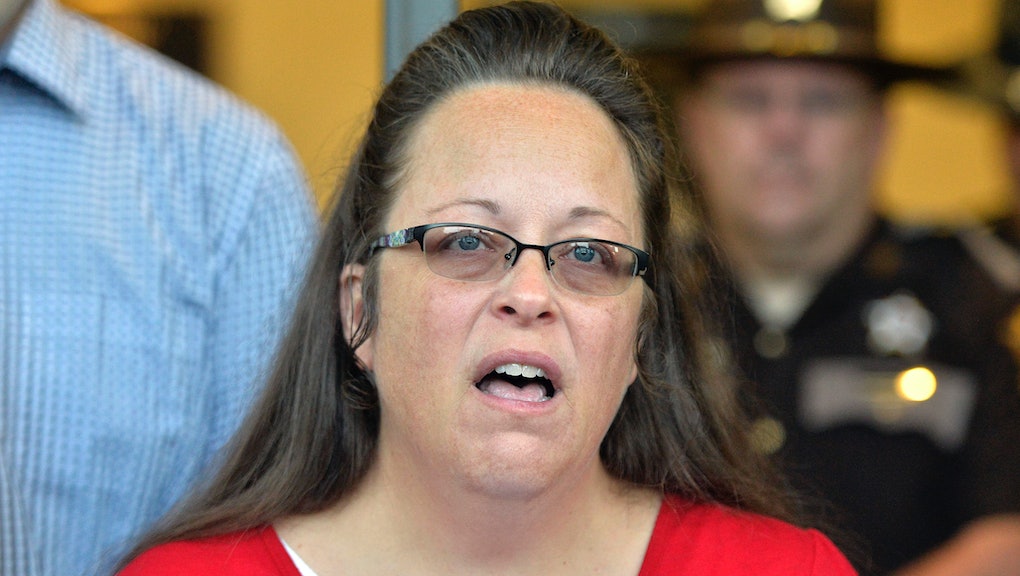 The Kim Davis saga continues. Less than a week after returning to her post at the Rowan County Clerk's office, Davis is being hit with a lawsuit from the American Civil Liberties Union for altering marriage licenses issued upon returning to office and failing to comply with her court orders.

According to the ACLU, which is representing a group of Rowan county couples, Davis' changes to marriage license forms "resulted in material alterations to those licenses that render their validity questionable at best."

The Kentucky county clerk, an elected official, began working on Sept. 14 after spending five days in jail for refusing to issue marriage licenses to same-sex couples. Reports began circulating on Friday when a lawyer for Kentucky deputy clerk Brian Mason told the court in a written notice that, upon Davis' return, "changes were made in some attempt to circumvent the court's orders and may have raised to the level of interference," NBC News reports.

However, Davis' lawyer Matt Staver doesn't believe the lawsuit will stick and said his client hasn't done anything illegal. "Kim Davis has made a good-faith effort to comply with the court's order," Staver told the Washington Post. "The ACLU's motion to again hold Kim Davis in contempt reveals that their interest is not the license but rather a marriage license bearing the name of Kim Davis. They want her scalp to hang on the wall as a trophy."

Davis initially brought national attention to Rowan county when she refused to issue a marriage license to a gay couple who filmed the ordeal and shared it on YouTube. The video quickly went viral, leading many to demand her immediate removal from office, while others, including Republican presidential candidate Mike Huckabee, gave her unabashed support for refusing to issue licenses to same-sex couples.

Davis' refusal to issue marriage licenses in the state of Kentucky followed a June 26 ruling from the United States Supreme Court legalizing same-sex marriage across the country. The ruling restricted states from preventing gay couples to wed.