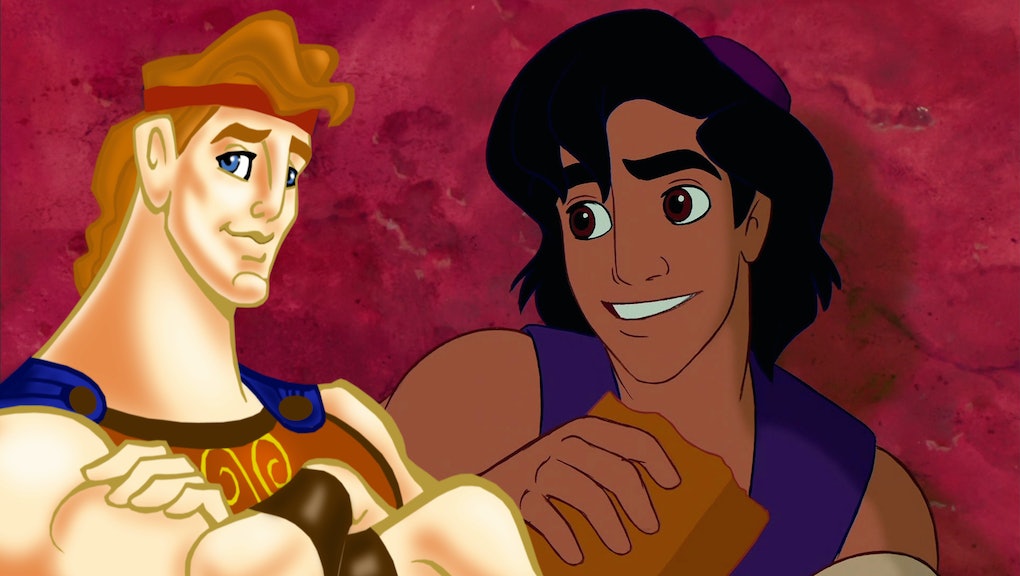 Will we ever see a Disney princess movie where the protagonist winds up with another princess? For now, that idea is probably a pipe dream. That's why the Tumblr dopeybeauty is so important — it's wish fulfillment.

On the blog, dopeybeauty edits together Disney movie GIFs to give them a decidedly LGBTQ bent. Princes wind up with princes, heroines with heroines, etc. Some pairings end beautifully, while others terminate tragically. More than anything, though, the GIF sets give a hint of what a new kind of Disney would look like.

The posts range from Aladdin and Hercules...

...to Tangled's Rapunzel and Brave's Merida...

...to Beauty and the Beast's Belle and The Hunchback of Notre Dame's Esmeralda.

On a technical level, the edits are impressive. Even the physical contact between the characters looks convincing — a kiss on Aladdin's cheek, or Pocahontas resting her head on Princess Aurora's chest. Combining Gaston swinging a torch with Esmeralda being burned at the stake is particularly clever.

These GIF sets give hope that these movies could actually exist. That is exactly why dopeybeauty's work is so important: It proposes an alternate path for Disney that would resonate with a large, modern audience.

If Frozen proves anything, it's that switching up the status quo is an effective strategy for Disney animated films. In the 2013 animated film, young princess Anna is dogged in her efforts to be with Prince Hans, especially when she has to be saved by her one true love. Unfortunately, she finds out he's a scheming villain. Fortunately, she's saved by love of a different kind: her sister, Elsa.

True love is sisterly love, period. When Frozen ends, Anna's found a new man, her ally Kristoff, but they're not committed to living together forever. They're just gonna go out sometime. Coming from an animated film studio known for their traditional princess-in-love stories, it was not just surprising, it was groundbreaking.

Could Disney ever do the same by producing LGBTQ stories? There's hints of hope. The studio toed the line of even including LGBTQ characters in — what else? — Frozen. In one scene, the shop owner Anna and Kristoff visit appears to have a husband and kids in his sauna. It's unclear, but for the normally conservative Disney, it's one hell of a suggestion.

So maybe we will see LGBTQ characters in Disney movies some day. An entire story about two Disney princesses or princes, however, is unlikely for the near future. Compared to the baby steps of possibly queer cameo characters, a whole narrative constructed around a same-sex couple is a giant leap. It's a dream fulfilled in DopeyBeauty's GIF sets, but for now a dream deferred.

Until then, though, we can happily stare at Aurora and Pocahontas' constructed love story. One can almost imagine the formerly sleeping beauty singing to her imaginary bride, "I know you/I walked with you once upon a GIF."