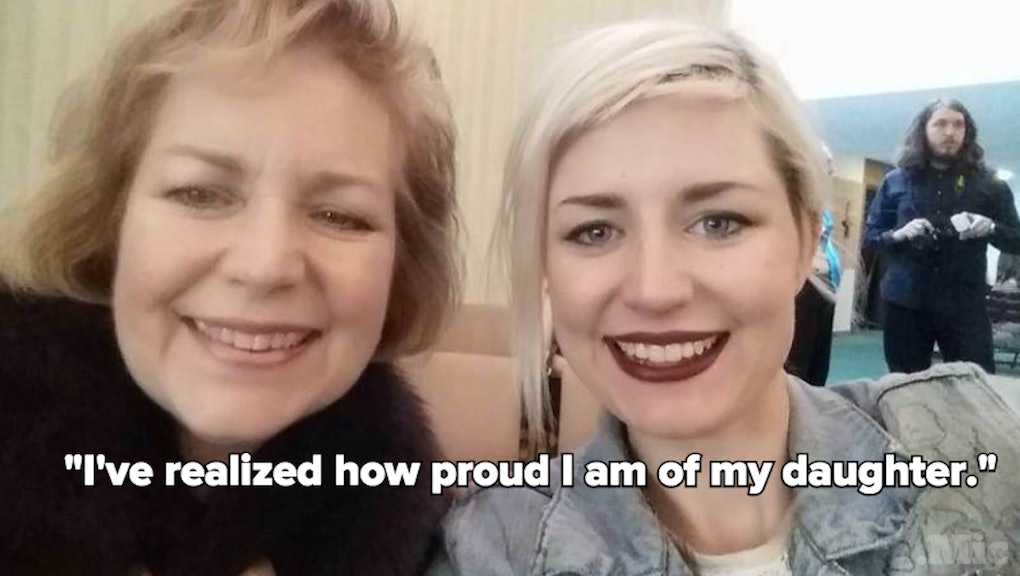 When I was 14, my mother and I went to Planned Parenthood together to attend a comprehensive sex ed class. She'd figured out that my boyfriend and I had started touching each other under our clothes and wanted to give me all the tools available to "make good choices." Sending me to Planned Parenthood was my mom's way of empowering me to make my own decisions about my sexual health; coming with me was her way of saying she'd support me, no matter what those decisions were.

When I was 23, my mother and I went to Planned Parenthood together so I could have an abortion. She'd volunteered to fly across the country and go with me after I told her I was pregnant. She never shamed me or questioned my decision, never told me I was irresponsible or disappointing. Because of my experience with her at Planned Parenthood when I was 14, I knew I could count on her support.

Not every mother or daughter has the same open-door attitude — but they should. As more and more women speak out against the ongoing attacks on Planned Parenthood, many have shared how the organization has helped them become more open about their sexual and reproductive health. That openness has, in many instances, strengthened women's relationships with their mothers or with their daughters.

While it can sometimes seem impossible to talk to your parents about sex, many young women who might never have broached the subject otherwise are asking their moms about their reproductive history, inspired in part by Lena Dunham's #AskYourMother campaign. And for some of these moms, the question is an opportunity to talk about their own sexual histories with their children for the very first time.

Mic spoke with four young women and their mothers about the ways in which being open about sex, sexuality and reproductive health — often because of their involvement with Planned Parenthood — benefitted their relationships and ultimately brought them closer. Here's what they had to say.

From a very young age, Beth, 32, was involved in her mother's Planned Parenthood volunteer work and learned the importance of bodily autonomy. Despite offering honest responses to anything her daughter asked about sexual health, though, Sherry, 63, didn't tell her about her own abortion until the night before Beth left for college. Later, Beth wrote about the experience discussing her mom's abortion in a New York Times op-ed.

"I think she retained a lot of the shame of the generation before her and of her generation," Beth, who is currently pregnant with her first child, told Mic. "But we had the kind of relationship where if I had questions, I could go to her. She wanted me to feel comfortable, and I never felt like I couldn't bring something up with my mom. Now that I'm experiencing pregnancy for the first time ... having my mom around to talk about these things with is so crucial."

Since then, Sherry and Beth have gone on to cofound Not Alone, an organization that works to reduce abortion stigma. "By sharing with my daughter, it created a very different bond for me," Sherry said. "We had an adult conversation, woman to woman. Our openness has brought me closer to my daughter than other mothers I know."

Nora, 53, became a Planned Parenthood volunteer after her second child, Julia, 22, hit puberty. She felt intimidated by the prospect of teaching her kids healthy sexual values, and she wanted to make sure she could be a reliable resource.

"I worked really hard at normalizing conversations around sex," Nora told Mic. "I never felt like I was supposed to have 'a talk' with them. I was always open. At first, during the preteen and early teen years, they'd get embarrassed, but now we can literally talk about anything. I can only attribute that to being open and working at it for that many years."

As a consequence, Julia said she and her siblings aren't afraid to ask their mother questions or seek help. It's also helped her become a resource for young women her own age.

"My mother was the one who explained things to me as I encountered them. Without fear of rejection or judgement, I could simply ask and get a straight answer," Julia told Mic. "I have had so many friends express jealousy or regret that they do not have a relationship like the one I have with my mom."

Abby, 26, first had "the talk" at school when she was in fifth grade. Her mother, Gayette, sat Abby down afterward and encouraged her to ask any questions she might have about puberty, sex and reproductive health.

"Kids are going to hear things from their friends, so by talking with me, she could better understand the issues and know that she could always ask me anything," Gayette told Mic. "[I wanted her] to learn to be safe. [Similarly], my daughter-in-law has already brought up the conversation to my 7-year-old granddaughter."

While many of her friends went to their doctors for advice about reproductive healthcare, Abby was able to go to her mother with any concerns she had about her body. "When I was 15, I was experiencing bad headaches and excessive periods, so I became a patient of my [mom's] OB-GYN regularly after that," Abby said. "Introducing me to her OB-GYN provided an additional resource if issues did come up, but before making appointments I would feel fine about discussing the problem with my mom to get her opinion about it."

Emily, 27, didn't grow up speaking openly about sexual and reproductive health with her mother, Daryl Ann, 61. It was only after she decided to record her abortion and post it on YouTube that she and her mom finally started talking about their shared experiences, and Emily learned Daryl Ann had had an abortion as well.

"It's been miraculous. The more I've spoken out openly about my experiences and other women's, [my mom has] allowed the floodgates to open," Emily told Mic.

While Daryl Ann didn't grow up discussing sex and reproductive health with her own mom, she said doing so with Emily, particularly in the aftermath of her viral abortion video, has done wonders for their relationship. "She's a strong powerhouse, and I want to be a part of what she's trying to accomplish for women," Daryl Ann told Mic. "I've realized how proud I am of my daughter by being more open with her."

Talking to Emily about her reproductive health hasn't just helped solidify their relationship. It's also helped Daryl Ann come to terms with traumatic aspects of her own sexual history. "I was assaulted five times when I was younger," she told Mic. "It wasn't until I was able to open up to my daughter that I started to feel differently, and see how horribly it was handled. I'm so thrilled I have a daughter."