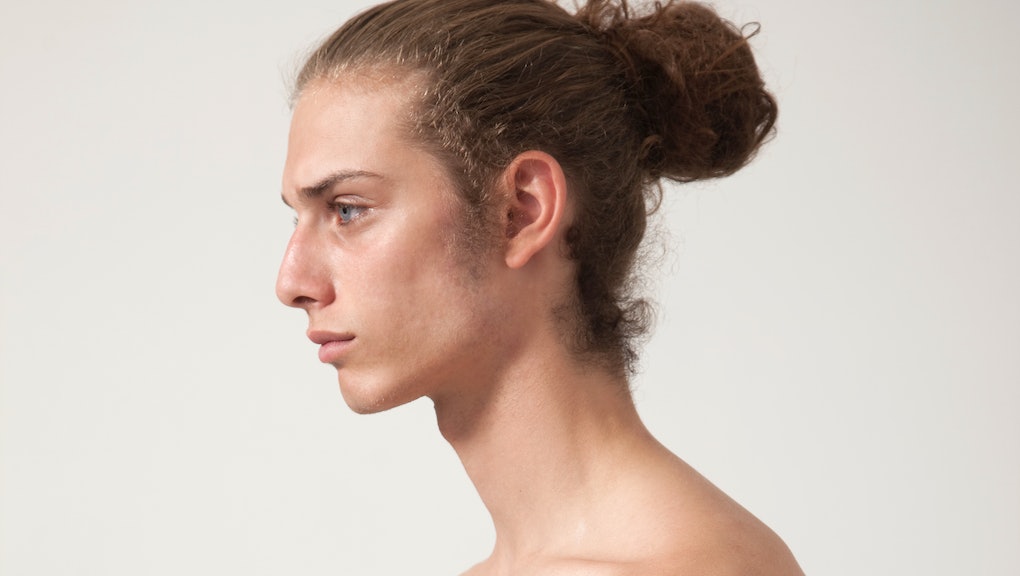 Science Has Bad News for Guys With Man Buns

The style of men pulling their hair into a knot above or behind their head has taken male fashion by storm. While there's no man bun institute offering official statistics, a casual stroll through any U.S. city or college town offers ample evidence for the trend.

While most of us probably know a relative, a friend, Jared Leto or someone else who sports the look, science has two words that should strike fear into the heart of anyone who has embraced the fashionable 'do.

Traction alopecia. "It's really, really common," Jackson, Mississippi, dermatologist Sabra Sullivan told Mic. "I see it probably once or twice a week." The condition, which causes acute baldness around the forehead and temples, is a direct result of hairstyles that pull the hair over long periods of time.

"They're putting traction on the hair follicles that the hair is not really meant to take," Sullivan said, adding the behavior could lead to follicle death plus permanent scarring. "Traction alopecia in men is becoming more common," she said and agreed that man buns were at least partly to blame.

It wasn't supposed to be this way. Despite an illustrious history of man buns arguably going back to Buddha, the documented condition of traction alopecia has generally been the purview of women, who in modern times have favored a larger variety of tight hairstyles. For at least half a century, scientists and researchers documented its effects on women, like in this 1958 mansplainer on the dangers of ponytails in what is now JAMA Dermatology.

"In spite of the repeated admonitions, the pony tail in recent years has enjoyed unusual fascination and popularity among our younger females," Dr. Albert H. Slepyan wrote nearly 60 years ago. "It is clear that those who wear the pony tail longer and more tightly drawn are considered more accomplished in the eyes of their contemporaries. It is the prolonged pulling of the hair backward and upward into a smoothly compacted corded hair bundle that has caused loss of hair in many of these persons."

Experts told Mic any hairstyle that creates overly tight hair pulling, regardless of gender, could produce irreversible long-term consequences. "Once you damage the hair follicle, it will not grow back," Dennis Zuniga, a high-end stylist at New York's Donsuki Salon, told Mic. Stern admonition even comes from no less a source than Derek Zoolander.

Black women. Nowhere are the long-term consequences of persistent tight hairstyling more pronounced than among black women. "It's an epidemic," Seandee Gayden, a licensed braider in Las Vegas, told Mic. "Most people don't want to hear the truth, they'd rather be in denial."

Gayden said she often treats women of color with weaves and braids so tight they require ibuprofen to mitigate the resulting migraines. A video taken by Gayden showing a woman "in her 20s" with a starkly receding hairline became a minor viral sensation after Gayden uploaded it to Facebook on Wednesday. So far, it has been viewed more than 625,000 times.

"Tight equals baldness," she tells her subject, whose face is concealed behind a washcloth. "The weave does not last longer because it's tight, it's going to make you bald."

Good news. "There are lots of men who wear man buns and don't get traction alopecia," Sullivan said. She and other experts agreed that for those looking to sport pulled hairstyles, there was one simple rule: Keep it loose. "The idea is not to pull so tight," she said. "You don't want to have to go for hair transplants later."

Gayden said that among black women, looser weaves and braids would not result in the condition. "I have braids. I'm all over my page. I don't have baldness at all." she said. "There is nothing wrong with wearing braids, as long as the person applying them is doing it the correct way."

So whether you're a saucy Brooklyn hipster, a ferocious wolf of Wall Street or just a common yuppie, don't forget to bun safely.