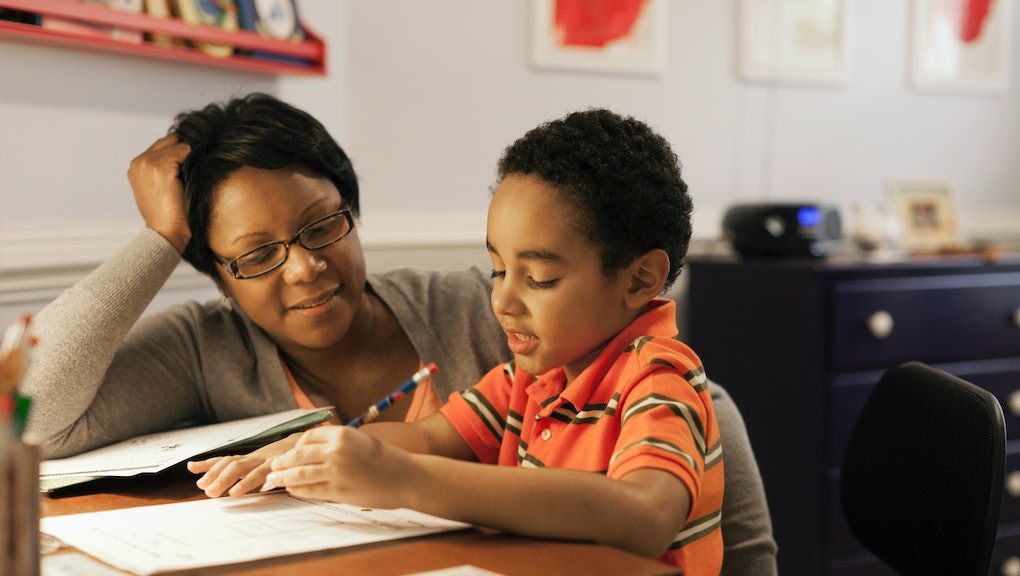 For moms of black children, worrying starts prior to school. LaTonya Lawson Jones, 37, remembers the happiness she felt during her first pregnancy, with her daughter. However, with her second pregnancy, which occurred during the Baltimore protests following the death of Freddie Gray, the mood shifted. She found out she was going to have a boy.

"I feared being pregnant and not knowing literally what would happen, and when I found out it was a boy, I was like 'Oh, God,' Jones told Mic.

Pregnancy and early motherhood, often thought of as periods of intense happiness and exploration for mothers of black children, are tainted with fear: fear for their children and what they may face.

"I'm fearful for him growing up in this environment, " she said, specifying she didn't want him "having to grow up in that kind of fear."

Statistics back up that fear, and can be harbingers for moms of black sons. One in 3 black men will end up in prison in their lifetime. More than 96,000 students were arrested in the 2009-2010 school year in the U.S., and 35% of them were black. Though black youth are 16% of the youth population, they are 37% of the detained youth population.

Jones has seen these statistics play out in her own family.

"My brothers have been pulled over if [the police] didn't believe that they could drive a car so nice," she said. "Those are the realities I know that we're going to have to teach my son how to navigate."

"My husband goes off to the grocery store, and if he's gone too long, I'm calling, 'Hey, are you alright?'" she said.

Iman Jones Doxen, 32, said she feels similar pangs when she thinks her son may one day face the same scrutiny her husband does.

"My husband, I'm always worried about him — he has tattoos, he has a beard, he's muscular," she told Mic. "I'm worried about him because he is the image of what a black man might look like to someone who has an ignorant mindset."

Tambra Raye Stevenson said she wouldn't allow her son to be referred to his school's "Early Stages" program without a fight, especially this being his first year in a new school. The program offered her son more attention as a child who was perceived to have "issues in the classroom," Stevenson told Mic. Her son's teacher contacted her when he began to show signs of isolation in the classroom.

While more attention may sound like a good thing, Stevenson, whose 6-year-old son is in first grade, was nervous that this also meant more surveillance. In an era where a kindergarten temper tantrum or doodling on a desk puts children in handcuffs, surveillance can be unnerving.

"Knowing that my son is in first grade, in two more grades is when they start the school-to-prison pipeline," she told Mic. "I've read stories about boys in particular receiving harsher punishment in school for bad behavior. I'm thinking to myself, 'Oh my god, are they really starting this on my son?'"

Stevenson was at a fundraiser for the Boys and Girls Club the first time she heard about how early the school-to-prison pipeline begins, which causes many minor infractions in schools to become criminalized offenses rather than cause for a visit to the vice principal.

"It was one of those moments where I felt that I had to be vigilant, but not obstructive," Stevenson said. "Because I was going to be that parent who would be appealing, writing letters to make sure that this wasn't how it was going down with my son."

Even something as simple as sending your child to school is a concern for the mothers of black children. Anxiety and hypervigilance among mothers who spoke to Mic were as common as shopping for pencils and notebooks.

Alexis Danzig, 54, said as mothers of black children, "you fix up your kid and send him off to school and you hope you're going to get him back in the afternoon," she told Mic.

Danzig, who is white, remembers her thoughts about bringing a black child into the world.

"I know what was part of the legacy of racist violence that I was taking on. I was agreeing to have a child under those circumstances," she said. "If raising a child means coming with incredible American baggage, then you're kind of going along with the flow."

Once, when her son, Tariq, was only 9, Danzig was called to her son's school because, overcome with anger and frustration at a teacher, he walked off his school's campus.

"He did what he could do — he removed himself from the situation," Danzig said. "They were acting like he had been a bad kid. He was a 9-year-old who happens to be a slightly-taller-than-normal black child, and there have been other minor incidents where I've just been like, 'Huh, I hope there isn't a misunderstanding. I hope this goes well,' and that's all you can do."

"I can't afford to talk to him just like a little kid."

For Stevenson, all the pressures surrounding her son means that she feels like she must raise an adult, not a little kid.

"I love him, I hug him, but at the same time, I speak about consequences," she said. She's spoken to her son since he was 4 years old about the extreme consequences he may face if he acts out and how little wiggle room he really has to mess up. "Other people, they may think that's not right or unfair, but this is my reality. I can't afford to talk to him just as a little kid."

Poet Clint Smith spoke in a TED Talk about the care his own parents took to make sure he did not run into trouble with the police. "I think of how hard it must have been, how profoundly unfair it must have felt for them to feel like they had to strip away parts of my childhood just so that I could come home at night," he says in the video.

As a single parent, Stevenson understands that her son may be even more susceptible to repercussions from his actions. "I knew I had to be adamant and involved, because I do always have this shadow hanging over my head of high risk behavior," she said.

"You're operating out of fear and not being able to give him the freedom to make mistakes, because it comes down on me, it comes down on all of us," she told Mic. "We only have this one life."

Doxen talks to her 6-year-old son about racism, even in the most abstract ways. "I feel like I have to make sure he's prepared," she said. "Just last weekend we read a book, and in the book, they talked about prejudice. We had conversations like, 'Do you know what that means?' 'Do you know the difference between racism and prejudice?' 'Do you feel like anyone is like that towards you?'"

"I want him to have an understanding of what that is so he can continue to be the great kid he is," she said. "I know eventually he's going to face those things. It's just a fact."

"I think that mothers of children of color, especially boys, have to deal with childhood falling away faster than parents of white kids," said Danzig. "That's just a phenomenon that we all sort of know about, that our kids are sort of — there's this kind of projection. Our kids are treated more harshly, they're judged more harshly."

"The idea of raising a little black boy in Texas truly terrifies me."

Two young black women spoke to Mic about their fears of growing up and having children in their towns.

Nzinga Williams, 25, said she didn't know how she would broach the topic of racism with her child, even though it was inevitable.

"Being a kid is hard enough; adding race and racism on top of that can be very stressful," she told Mic.

Khloe Scurry, 25, lives in Dallas and told Mic that she's always dreamed of having "a chocolate drop of a son," but she is terrified of having her son seen as a thug or a threat as early as age 9.

"The idea of raising a little black boy in Texas truly terrifies me, even though it's something I want more than I can truly articulate," Scurry told Mic. "Scares me to the point where I try to convince myself and others that I'm just not the 'mother' type."