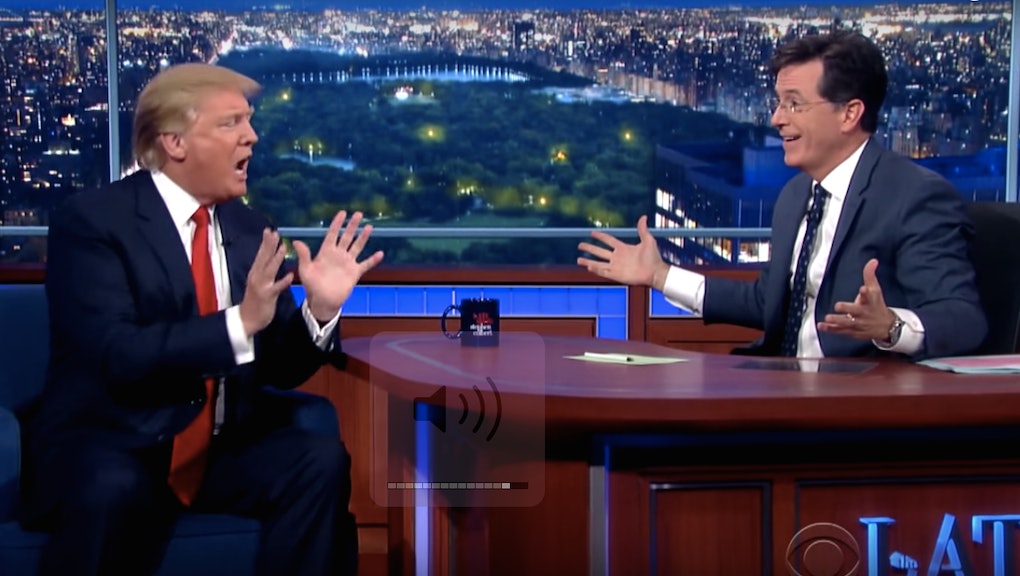 The question is deceptively simple. For Trump and other proponents of the "birther movement," who maintain Obama was born in Kenya and has either a forged American birth certificate or none at all, the answer is "no." On Tuesday, Colbert pinned Trump down on the issue, about which the candidate has been vocal on in the past.

"I'm going to throw you a big, fat meatball for you to hit out of the park right now," Colbert asked Tuesday. "This is the last time you ever have to address this question if you hit the ball, okay? Big old... there's, like, sauce all over my hands, this meatball is so big. Barack Obama: Born in the United States?"

Trump immediately tries to dismiss the question, at which point Colbert pushes the issue. "Was he? It's a Meatball! Just hanging out there! C'mon!"

Trump said, these days, he's decided not to discuss the issue. "I don't talk about it anymore," he replied. "I talk about jobs. I talk about our veterans being horribly mistreated. I just don't discuss that."

"You know that meatball is being dragged down the steps of the subway by a rat, right?" Colbert responded, referencing the rat who became an Internet sensation when it was filmed dragging a slice of pizza down some stairs in a New York subway station.

Until recently, Trump has been characteristically aggressive on the matter of Obama's citizenship, suggesting he does not have the constitutional right or authority to be president. In March 2011, Trump made the argument on the O'Reilly Factor, even after the previously skeptical eponymous host said the evidence convinced him to abandon the birther movement.

"He doesn't have a birth certificate," Trump told O'Reilly. "He may have one, but there's something on that, maybe religion, maybe it says he is a Muslim. I don't know. Maybe he doesn't want that."

Trump was perhaps more cautious with Colbert after receiving backlash for not correcting a concerned citizen, who said Obama was a Muslim and that the United States needed to solve the "problem" of "Muslims" at a Trump event Thursday.

Watch the full Late Show interview with Donald Trump below: