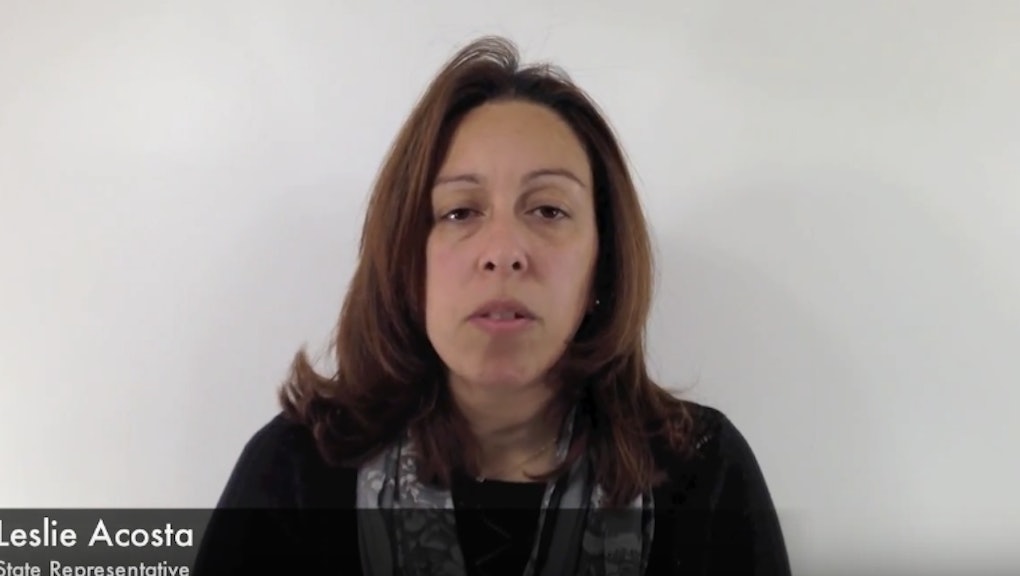 If a recent proposal put before the Pennsylvania Legislature succeeds, English will become the state's official language, the Associated Press reported Monday. When Rep. Leslie Acosta, the state's first and only known Latina legislator, chose to fight this bill in a committee hearing, she was silenced immediately for doing so.

In Spanish, Acosta made her statement and questioned the first witness — a white nationalist — at a committee hearing on the bill, the Huffington Post reported Monday. Although Acosta eventually switched to English, bill co-sponsor Daryl Metcalfe still interrupted her, deemed her behavior inappropriate and turned off her microphone.

"You're out of order," Metcalfe says in a video of the interaction. "You're not making points."

When Acosta countered that she had "the right to make my statement," Metcalfe shut off her mic. He noted that the committee would return to her if there was extra time remaining at the end.

"I started out in Spanish to make a statement," Acosta told the Huffington Post. "I'm a testament to success in this country and I understand that English is necessary to succeed ... but this bill is a violation of First Amendment rights and interferes with the 14th Amendment."

English-only legislation is not uncommon. Between the late 1980s and early 1990s, 23 states passed measures that made English their official language, according to the New York Times. Thirty-one states currently uphold such legislation. In 2006 and 2007, more than 60 senators voted to make English the official language of the entire nation. As recently as 2011, two Pennsylvanian lawmakers proposed that English should become Pennsylvania's official language. In 2013, Oklahoma Sen. Jim Inhofe sponsored an amendment to immigration bills that would similarly uphold English above all other languages.

While Metcalfe previously stated in a public hearing that the current legislation would "protect taxpayers" by saving money required for "translation services both verbal and written" while it "encourages immigrants to assimilate," the text of this specific bill doesn't actually include evidence or estimates of just how much money this effort would save.

"How do you defend a bill and yet you don't have the answers to how much this going to save the government? It's pandering," Acosta told the Huffington Post.

It's unclear, therefore, that this bill would have little impact beyond upholding a racist social standard in the state — and that's an outcome Acosta is unwilling to accept.

"[Immigrants] are embedded in the American fabric, and what unites us are common, core values," Acosta told ThinkProgress. "But I'm not going to separate myself from who I am, from my culture, from my ancestry. ... This is overt racism in the 21st century. We've got to call it like it is. It has no place in the House of Representatives. I'm on this and I'm not letting go."