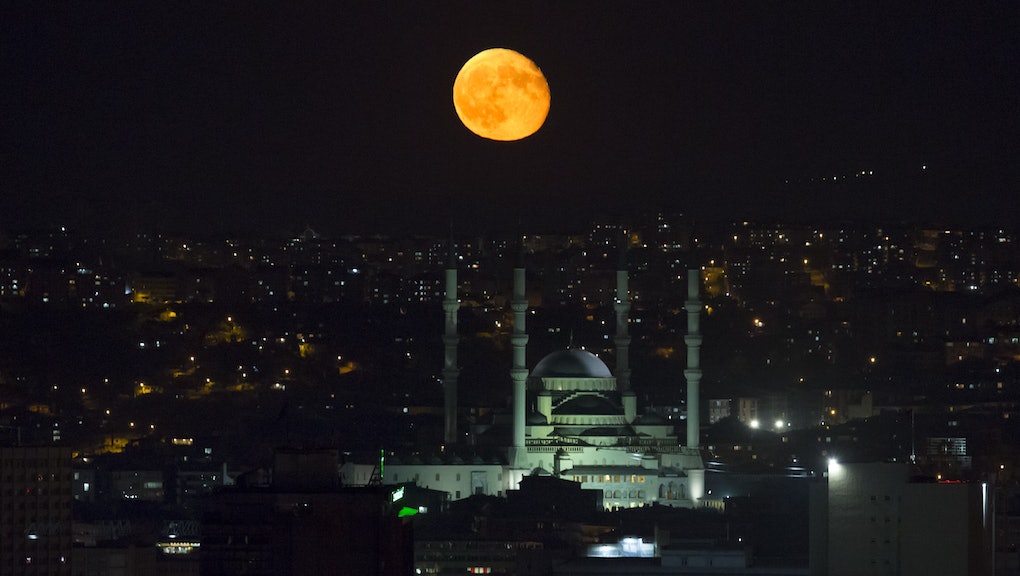 What Is a Supermoon? A Guide to Sunday's Lunar Eclipse

Sunday stargazing promises to be extra stellar. For the first time in 32 years, a "supermoon" is slated to coincide with a total lunar eclipse, USA Today reports. The double astrological event won't repeat for another 18 years.

According to NASA, supermoons occur when the moon is full at the same time it is closest to Earth. Lunar eclipses happen when Earth is positioned directly between the full moon and the sun. Sunday's total lunar eclipse will begin at 10:11 p.m. EDT and will be visible for a full hour and 12 minutes, according to USA Today. The supermoon will be visible after nightfall and will be shadowed beginning at 8:11 p.m. Eastern.

"Because the orbit of the moon is not a perfect circle, the moon is sometimes closer to the Earth than at other times during its orbit," explained Noah Petro, deputy project scientist for the Lunar Reconnaissance Orbiter at NASA. "On Sept. 27, we're going to have a perigee full moon  — the closest full moon of the year."

But the fun doesn't stop there. During a total lunar eclipse, the moon appears red due to the Earth's atmosphere. They're nicknamed "blood moons," and EarthSky explains the tie-on to Biblical prophecy (Read: apocalypse now).

But Petro's not worried. "The only thing that will happen on Earth during an eclipse is that people will wake up the next morning with neck pain because they spent the night looking up," he said.

Sunday's spectacle will be visible to stargazers in North America, South America, the Atlantic Ocean, Greenland, Europe, Africa and the Middle East, according to Popular Science.

And in the event of a cloudy Sunday evening, or for those who prefer the indoors, NASA will stream the event live from 8 p.m. until at least 11:30 p.m. EDT. NASA solar physicist Mitzi Adams will even be available during the live stream to answer any remaining questions via Twitter at #askNASA.

In the meantime, check out some images of the last supermoon from around the world on Mic.