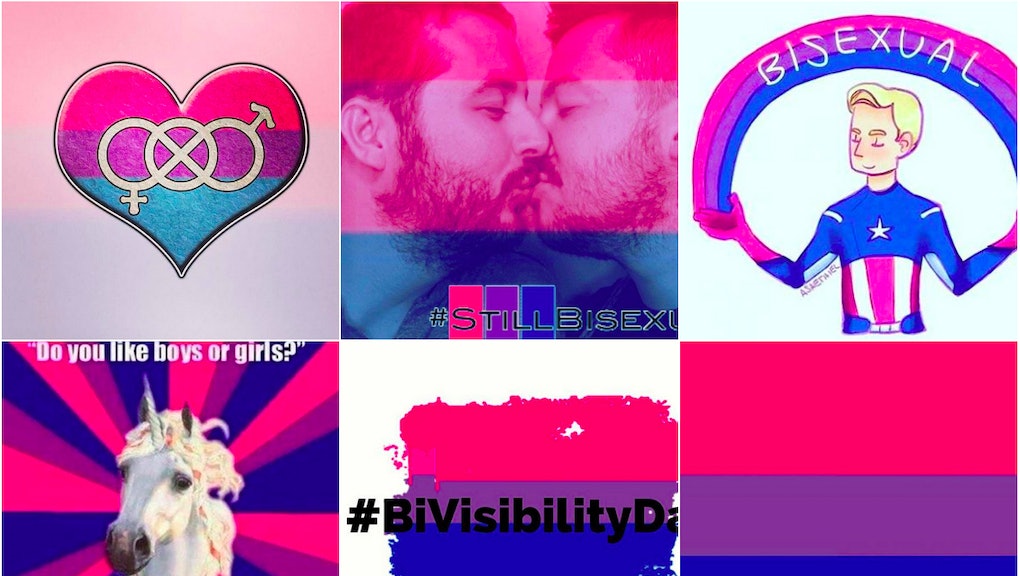 There are various myths and misconceptions surrounding bisexuality, such as the idea that bisexual men are just inherently promiscuous, or that bisexual women only sleep with other women to "turn guys on."

On Wednesday, members of the bisexual community took to Twitter to put these myths to bed once and for all. As part of Bisexual Awareness Week, Twitter users used the #BiVisibilityDay hashtag to celebrate and increase awareness of the bi community. But they also took it as an opportunity to sound off about the harmful and insidious stereotypes surrounding their sexuality — and on what better date than Celebrate Bisexuality Day?

For instance, there's the idea that bisexuals are just "confused" about their sexuality:

Or that they're just greedy:

Or that they are a big ol' bunch of cheaters:

Or that they don't even exist at all!

Some users highlighted the double standards that bi men in particular face, such as the idea that bisexuality is merely the first stop on the bus to Gay Town:

Or that they don't deserve to be acknowledged in the first place:

Celebrating the "B" in LGBT: Gay and lesbian issues have become more and more mainstream over the years, thanks to increased representation in pop culture and various legal advances, such as the Supreme Court's recent ruling in favor of gay marriage. But due to the many myths surrounding bisexuality, the stories of people who identify as bisexual are often lost or buried in the conversation, an act known as "bi erasure."

Much of the stigma surrounding bisexuality is rooted within LGBT communities. A 2011 report released by the San Francisco Human Rights Commission found that "bisexuals experience high rates of being ignored, discriminated against, demonized, or rendered invisible by both the heterosexual world and the lesbian and gay communities. Often, the entire sexual orientation is branded as invalid, immoral or irrelevant."

The struggle is even more real on the dating scene. As the above tweets demonstrate, dating while bisexual presents a unique set of challenges. For men, this can mean being perceived as gay individuals in denial, making some straight women as well as gay men less inclined to view them as possible long-term partners.

This was the concern writer Ada Calhoun confessed in Glamour in 2012, in an account of her experience of marrying a bi man. "Early in our relationship, which got super serious, super fast, I was anxious," she wrote. "I worried Neal would change his mind, say that he was actually truly 100% gay after all, and leave me for a man."

Bisexual women can sometimes face the same issue in being perceived as in-denial lesbians, but they are often up against another set of double standards. In a Fusion article titled "Bisexual Dating is Hard," Amy Stretten cites everything from "You're just experimenting" to "You're greedy... and freaky!" to "You don't want to commit" as common stereotypes single bi people are up against on the dating market.

If nothing else, Wednesday's flurry of #BiVisibilityDay tweets further validate that experience. The hashtag exposes bisexual people's frustration with having to constantly refute various erroneous and harmful myths about their sexuality — and it proves that now more than ever, they need a place to share their stories.