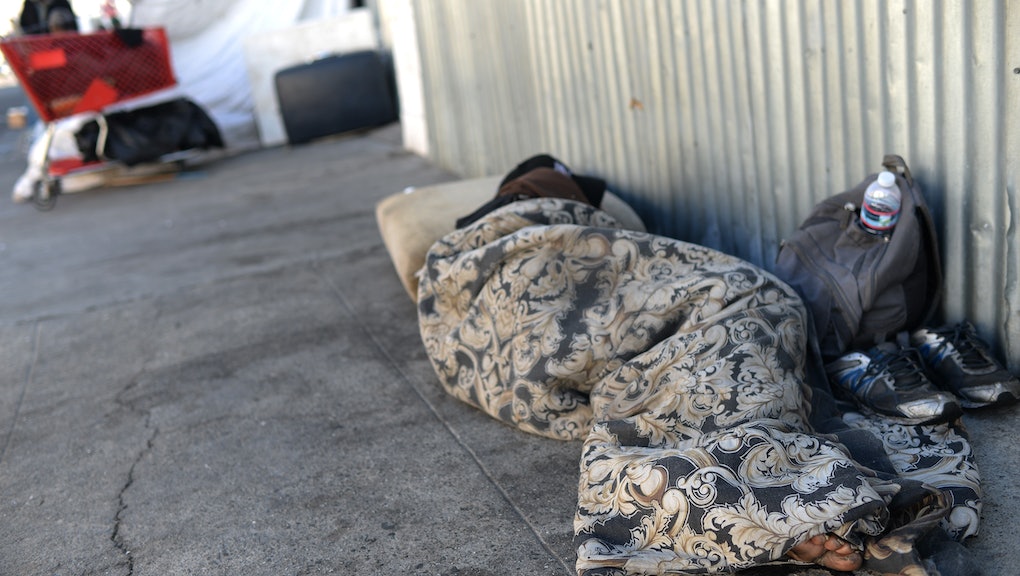 Los Angeles has become the first city in the nation to declare a public emergency in response to a boom in the number of homeless people on its streets, the New York Times reported.

The street-dwelling population has grown so large that it constitutes a city within a city: Officials estimate about 26,000 people roam Los Angeles unsheltered.

The crisis has grown so dire that the mayor and a number of City Council members proposed Tuesday that the city spend $100 million in the next year on permanent housing and shelters, Reuters reports.

"This city has pushed this problem from neighborhood to neighborhood for too long, from bureaucracy to bureaucracy," Mayor Eric Garcetti said, according to Al Jazeera America. "Every single day we come to work, we see folks lying on this grass, a symbol of our city's intense crisis."

The details: In the past two years, the homeless population in the city of Los Angeles has grown by 12%, and Los Angeles County as a whole has seen an 85% uptick in the number of people scraping by without a solid roof over their heads.

By declaring the surge in homelessness an emergency, the city becomes eligible for federal funds to supplement its efforts to mitigate the problem.

What will matter in the end will not be how much money officials throw at the problem, but rather how they spend it. The city already uses about $100 million on issues related to homelessness, but a vast majority of that goes to breaking up encampments and keeping homeless people on the move. "We spend $100 million on homelessness, and 85% of our response is law enforcement," City Councilman Gil Cedillo told the Los Angeles Times in June. "That tells us our strategy is not working."

Cedillo's comments came as the city passed two controversial ordinances that sought to deal with the issue of homelessness mainly by way of making the lives of the homeless more difficult. The ordinances made it easier for the city to clean out homeless encampments and remove personal property that people leave out on sidewalks and in parks. They also shortened the warning notice the city is required to give someone before confiscating property they leave out in public from 72 hours to 24 hours, and eliminated notice for anything that can't fit in a 60-gallon city trash receptacle. Most critically, violation of the ordinances are punishable by citation or misdemeanor charges.

Cruel and unusual: In August, the Department of Justice harshly criticized anti-homelessness laws like the ones that LA passed this summer. It filed a statement of interest regarding one such law in Boise, Idaho, as cruel and unusual punishment. "If a person literally has nowhere else to go, then enforcement of the anti-camping ordinance against that person criminalizes her for being homeless," the statement reads.

The new announcement on money for permanent housing and shelters seems to suggest that LA could be trying to steer the ship in a different direction. It's not clear from current reports what the exact breakdown of spending will be, nor if the amount is in any way specifically tied to scope of the homeless problem in the city. The New York Times suggests the amount was chosen at least in part for its symbolism — it's an impressive sounding number — but there is not yet a sign that it's meant to match an estimate for doing something along the lines of housing the entire homeless population.

At least some of the funds will be spent on homeless shelters. But an abundance of evidence suggests that permanent supportive housing is cheaper, more effective and more humane than any other solution that's been devised so far. So far there's nothing to suggest that any good comes from treating the homeless like a nuisance.