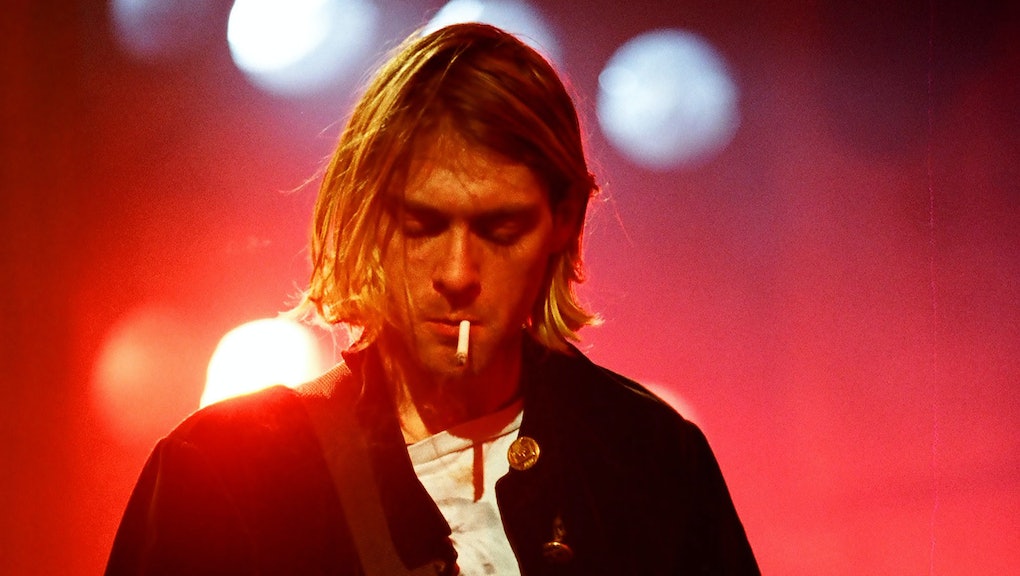 On one hand, he wanted to write something to capture his disgust "with my generation's apathy, and with my own apathy and spinelessness," as Cobain once described it, "for not standing up against racism, sexism and all those other -isms that the counterculture has been whining about for years." He wanted it to represent how much he "despised the mainstream," as Nirvana's bassist Krist Novoselic put it.

At the same time, however, Cobain wanted the song to be the a perfectly accessible pop masterpiece. When these two volatile impulses came together, the impact they had was catastrophic.

The strength of "Smells Like Teen Spirit" helped launch Nevermind to the top of the charts, dethroning King of Pop Michael Jackson from the No. 1 seat. The album turned Nirvana into an imperial power in rock 'n' roll, but that success came with a huge price tag listeners are still paying back.

Nevermind proved alternative rock could be big business. The void that Kurt Cobain's death created encouraged labels to seek another star — someone who might be more open to playing the fame game. From this dark place emerged Creed, Nickelback, Limp Bizkit and every other early late '90s punchline band that generally book cruise ships these days.

Rock 'n' roll never recovered from Nevermind, which dropped 24 years ago Thursday. It likely never will.

Summoning the perfect storm: Nirvana's Nevermind broke onto the scene at the perfect time. "It came right at the end of the death knell of hair metal, and the world was screaming for rock music that would be meaningful again," Charles R. Cross, author of the Cobain biography Heavier Than Heaven, once told Today.

Cobain's disillusioned, angst filled lyrics became mantras of generation. "It was just a time of frustration and lethargy — nothing much was happening in the lives of Gen Xers at that moment," author of X Saves the World Jeff Gordinier said, according to Fameology. "['Smells Like Teen Spirit'] just seemed to tap into all the frustration out there. It seemed to have these really basic power chords that just worked upon the human brain."

Not every song was a pop smash with a distorted Boston riff as Cobain himself once admitted of "Smells Like Teen Spirit." "Drain You" and "Lithium" maintain defiant, poetic edges to this day, though neither made anywhere near the same impact.

The power of Cobain's music and image was not lost on the American business world. The album's success and omnipresence on MTV piqued the interest of the fashion industry. Designers started flaunting the flannel and torn jeans of grunge aesthetic. Perry Ellis showcased high-end grunge fashion on supermodels models Naomi Campbell, just a year after Nevermind dropped. The New York Times scrambled (and fumbled) while trying to put together a lexicon of "grunge-speak" to help readers navigate the pop culture phenomenon.

All this play encouraged the music industry to push the trend to its absolute limits. They started mining the Seattle grunge scene like crazy, trying to find the next Nirvana until it was totally depleted of talent.

"Every band in America knows it's ready for its contract and its platinum album right now," wrote Jon Pareles describing this "feeding frenzy" for the New York Times back in 1992. "Why Nirvana and not (yet) Pavement, Band of Susans, Superchunk, Cows, Arson Garden, Cop Shoot Cop, Vanilla Trainwreck or Drunken Boat?"

Cobain watched this circus play out with disgust. The bigger the shows got, the more he despised having to play the new pop grunge he crafted for Nevermind. "There was always punk-rock guilt," Grohl once said years after Cobain's death. "Kurt, in some way, felt guilty — that he had done something that so many people latched onto. The bigger the shows got, the farther we got from our dream, our ideal."

Cobain attempted to undo the damage with Nirvana's next and final album In Utero. Its production showcased a more urgent rebellious dissonance, including songs with sneeringly ironic titles such as "Radio Friendly Unit Shifter." Without actually having a meticulously polished radio single, however, the album didn't move nearly as many units as Nevermind. It could hardly stem the tidal wave that slowly would wear away the rebellious edge off rock 'n' roll entirely in the coming years.

The grunge craze gradually gave way to lighter, corporatized forms of rock. Up-and-coming musicians realized they could land the big contract if they were willing to play the game and write the tighter pop-rock fusions Cobain grew to despise. "These young musicians grew up to form bands like Creed and Nickelback, and listeners were stuck with a whole generation of flaccid wannabes carrying the torch for mediocrity," Anderson writes. "They sold millions but were as empty as the hair-metal bands their forefathers had fought so hard to vanquish."

Several forms of rock obviously still exist in niche musical pockets, but the genre will never be the unavoidable cultural force it once was. That said, the glut of Kurt Cobain media audiences have been hit with this year signals we're still on the quest for the "next Nirvana" in some way. It's not really the explosive riffs people seem to be seeking, however — it's the depth of feeling that Nirvana managed to capture with them.

"It's almost like a rite of passage when you turn 12 and 13 and you look at your parents with different eyes," Brett Morgan, director of the recent Cobain documentary Montage of Heck, told NPR. "You have Kurt, and he's singing about your experiences. They're our collective experiences."

Once today's music fans find an artist fit to capture these feelings on that same level, maybe the ghost of Kurt Cobain can finally be laid to rest.