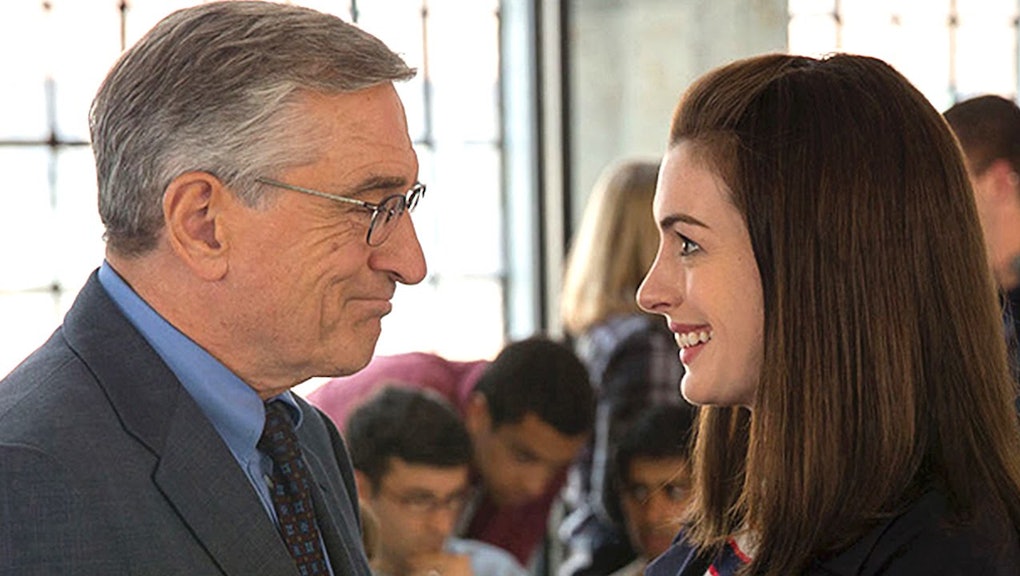 Director Nancy Meyers' new film The Intern may not be the kind of movie one actively seeks out at first, but five years from now it will be a home-for-Thanksgiving, look-what's-on-cable favorite. The story of senior intern Ben (Robert De Niro) and his hyper-competent, professionally conflicted boss Jules (Anne Hathaway) is destined to be that sentimental favorite. Is it because the movie is so good? No. The quality is just a bonus.

The Intern occupies a very specific place in pop culture. It's not going to be an Oscar winner, nor will it likely storm the box office to massive numbers. Instead, The Intern will be something much more personal: a parent trap.

Drawn from Meyers' 1998 film of the same name, the ultimate parent trap is the kind of film families can revisit several times without getting bored, even after the children are grown up. It can be part of a holiday tradition or just something to watch when adult kids are back home.

The definition of a parent trap isn't strict. Families can love a gritty, slow-paced thriller like Michael Clayton, or something regional, like The Departed for a Boston clan. For one Englishman, it's the massive multiplayer romantic comedy Love Actually.

"It's such a comfy, wonky, relatable, mushy mess," said Chris, 26, who calls Love Actually "quintessentially British." "It's full of famous people that bridge the generation gap. The premise is simple — everyone deserves to be happy — and it's so bloody festive, it's perfect for watching on Christmas Eve."

"Parental catnip" — Chris' nickname for the category that could include include Mel Brooks movies like Young Frankenstein, modern favorites like The Help and perennial darling The Sound of Music.

"It's my mom's favorite especially. She always cries during both instances of 'Edelweiss,'" Kayla, 23, said of The Sound of Music. "One time, she had a little too much to drink at New Years and insisted that she had never seen the beginning of the movie. ... We told her that was impossible, because we've watched this movie approximately a million times together."

While Zach, 37, also calls out The Sound of Music alongside parent traps like My Big Fat Greek Wedding and Meet Me in St. Louis, not all examples are so traditional. Take David, a 27-year-old Australian who's watched Richard Linklater's entire Before trilogy with his mom on two separate occasions.

"Not only are they just so wonderfully beautiful, full of dialogue that's practically poetry ... but they open up conversations between us about life, time and getting older," David said.

The themes of "time, life and getting older" are incredibly prevalent in Meyers' films as well. She's quick to cast older actors in prominent roles. Her most recent films are about aging in a way that isn't sad or pitiable, but celebrates the wisdom and vitality of those above the retirement age.

"When you're in your 60s, I imagine it's refreshing to see people your age who aren't portrayed as sexless and decrepit," said Rob, 33. His father, a romantic comedy fan, saw Meyers' It's Complicated three separate times in theaters and on countless viewings since. That film, about a divorcée (Meryl Streep) having an affair with her ex-husband (Alec Baldwin), made over $100 million at the box office. Not bad for a romantic comedy about older partners.

That doesn't mean Meyers' audience is restricted to older moviegoers. Many young fans first discovered her work through The Parent Trap, Lindsay Lohan's breakout vehicle. Even that film dealt with time as a theme: the years that pass between two twin sisters kept apart, or the time their parents have to make up for when reunited. Meyers' themes, plus her gentle but firm respect for her characters (and her fabulous sense of home decor) keeps her fans of all ages coming back for more.

In The Intern's case, Meyers' usual themes are front and center. De Niro's Ben is retired, but he hates feeling stagnant. He gets a job at Jules Osten's online shopping startup, About the Fit, with Hathaway as his half-his-age boss. Their age difference isn't a running gag or a reason for Ben to feel bad. It's awkward, but acknowledged, and then he quickly becomes her closest ally.

Ben, a widower, is a font of wisdom and strength earned from 70 years of living. Jules is a seemingly oxymoronic mix of steely and sweet, until it's clear her demeanor directly informs what a confident, powerful startup owner she is. She learns from Ben, but she doesn't rely on him. She makes her own choices — about career, family and marriage. For a movie that reveres its male lead, The Intern is defiantly feminist.

That's what makes The Intern such a great blend for parents and their adult kids. Young, socially conscious viewers will be inspired by Jules; older moviegoers will get a kick out of Ben's escapades with Brooklyn millennials and finding new love with a wonderful woman (Rene Russo). It's got something for everyone.

More than that, however, moviegoers might find something to like in the character they're not meant to relate to. That's the cornerstone quality of the parent trap: bringing generations together. Like the characters in the film, The Intern bridges the gap. It may not be the most groundbreaking piece of cinema, but it's one that connects us.

The Intern hits theaters Friday. Watch the trailer for the film below: