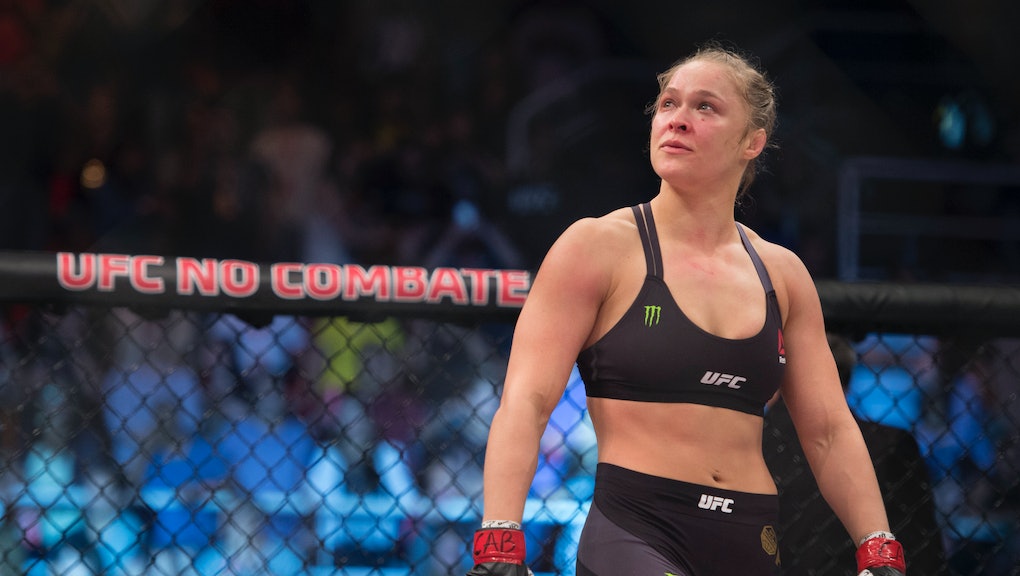 Tank Abbott Wants to Fight Ronda Rousey, Then Have Her "Make Me a Sandwich"

It looks like Ronda Rousey has another competitor who wants to take on the Ultimate Fighting Championship Women's Bantamweight Champion. Former UFC fighter David Lee "Tank" Abbott had some choice words for Rousey on the latest episode of his podcast The Proving Ground, in which he called on the rising star to compete against him in the ring, the Huffington Post reports.

The 50-year-old mixed martial artist and author said he would award Rousey $100,000 if she beat him. If he won, however, he'd ask Rousey to "make [him] a sandwich."

During the radio segment, Abbott made some disparaging remarks toward the female champion, joking with a producer of the podcast about how Floyd Mayweather, with whom Rousey has an ongoing feud, would crush Rousey in a match because she's a woman.

"Don't think for a New York second that at the end of the day pretty boy Floyd would knock the living stuffing out of Ronda Rousey," Abbott said. "She's a girl! It's all about this emotional stuff [...] I will tell you this, I don't care. I will fight any woman on this earth, for free."

He then issued a "formal challenge to any female" to take on the former UFC star in a fight. "If I win, which will happen, you have to make me a sandwich," Abbott said.

However, Abbott has a catch, which he casually threw in at the end of the discussion on fighting women in the ring. "You can't be, like, a tranny ... you gotta be a female," he said, using a derogatory slur for a person who is transgender.

Rousey has yet to respond to the Abbott's request. However, Rousey has previously said she can beat "anyone on this planet." So, for now, TBD on whether that includes a sexist former mega star in need of a sandwich.

Listen to Abbott's podcast below: