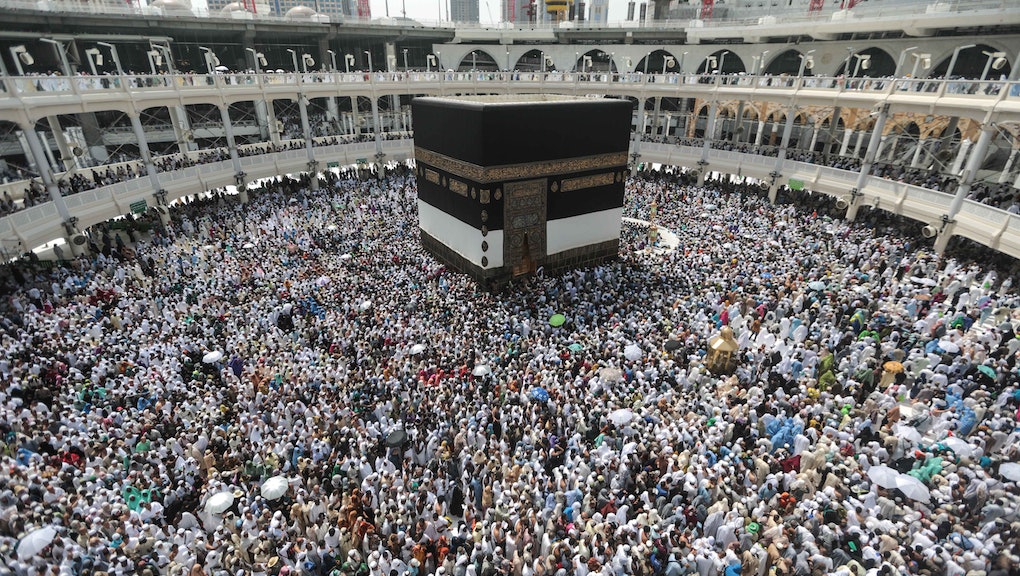 On Thursday, more than 700 people died, and 863 more were injured, during a stampede in Mina, near Mecca, Saudi Arabia, in the midst of hajj, the pilgrimage required of all Muslims at some point in their life. Masses gathered in Mina, where 2 million people flocked to perform the last portion of hajj, in which people throw stones at pillars that signify the devil.

"There is no accountability," Madawi al-Rasheed, an anthropologist and visiting professor at the London School of Economics, told the New York Times. "It's shocking that almost every year there is some kind of death toll."

As it's currently set up, the hajj puts so many people together in massive groups that the entire event can become overwhelming and terrifying.

"The most frightening part was when you exit those tunnels and you approach the pillars for stoning," Parvez Sharma, who recently made a film on his hajj, told Mic. "Everything reaches a frenzy, and there's a manic quality to it. For me it is the most unholy time of the pilgrimage."

But it's not just during hajj. Massive gatherings of people regularly break out into confusion, and often result in deaths. In the past 50 years, a number of concerts have left hundreds dead, including a show on Dec. 30, 2004, in Buenos Aires, Argentina, where 194 people died. During a Who concert in Cincinnati in 1979, 11 people died, and at the infamous Altamont Speedway Free Festival of 1969 in California, four other died. In most of these cases, other factors were also at play, but one thing unified them as well: massive crowds of people who were put into a state of panic.

So why is this happening? In most stampedes, the expectation is that both fear and the desire to flee overcome the masses, sending people into a panic. However, as the New Yorker previously noted, in instances such as the hajj or Black Friday stampedes, crowds are running toward something specific. And with so many people crushed together in a stressful state, it's easy for the situation to get out of hand.

"The frenzy is because of this horrific ritual of stoning the devil and everyone is in that manic state," Sharma told Mic. "There are times when you are brought to the ground and people are walking all over you — you, of course, are afraid."

But fear doesn't necessarily even have to be the catalyst for movement. As Michael Bond, an author who frequently covers psychology, wrote in Slate in March, "Individuals in crowds do not abandon their rationality or surrender their identity to a mob mentality. They do not lose their minds. They do, however, become highly sensitive to what those around them are doing, and become strongly cooperative as a result." So, rather than running out of fear, crowds may just start a stampede because everyone else is doing it.

But the dangers of being in the middle of a massive crowd extend beyond just the potential of being trampled. Sometimes, the very nature the crowd itself can cause a frenzy. "The problem doesn't need to start with panic," Psychology Today explains. Rather, simply standing in a large enough crowd in a small enough space can create such a huge pressure on a person's rib cage that they can't breathe.

"The sheer force of people moving into an already crowded area can cause sufficient pressure to cause fatalities, which then triggers further panic, shoving and more death," Psychology Today's Jeff Wise notes.

Ultimately, the only way to prevent, or at least contain, such tragedies is sufficient crowd control when anticipating large numbers of people. "What's important to point out is this [stampede] is Saudi Arabia's problem," Sharma said. "They need to improve their infrastructure, as far as I'm concerned. But I don't think there's going to be a lot of change. This will be in the news cycle for a couple of days, and then everything will go on as is."