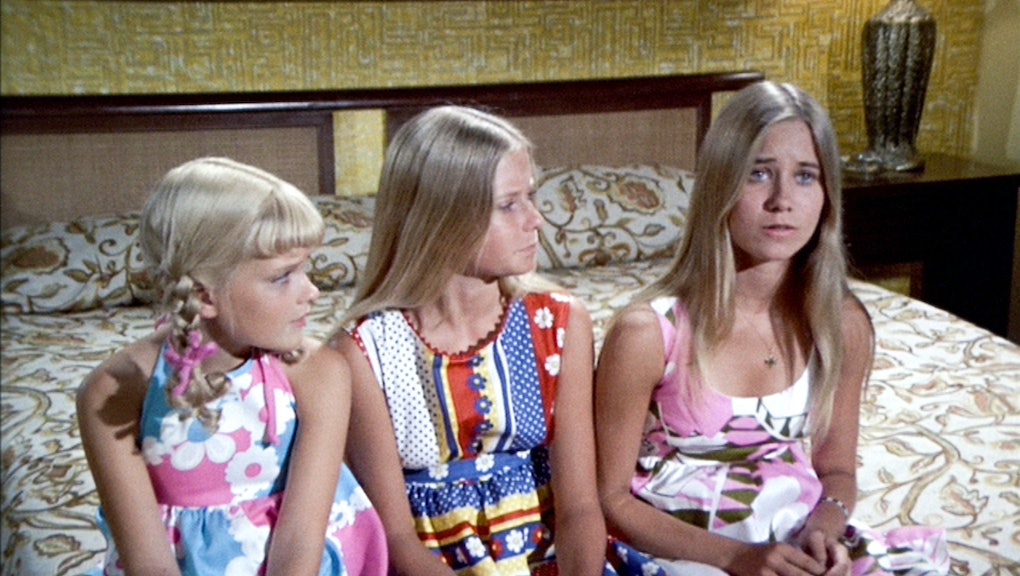 8 Reasons Why the Middle Child Is the Best Child

Those immortal words were of course uttered by The Brady Bunch's middle daughter, Jan, in a moment of frustration that her big sister Marcia always seemed to get more attention and admiration than her. Jan has come to be something of a figurehead for what experts have deemed "middle child syndrome."

As the theory goes, middle children are forever fated to be ignored in favor of the accomplished, mature firstborns and cute, needy lastborns. So they end up getting lost in the shuffle of their own families — and develop severe inferiority complexes as a result. The idea that middle children are emotionally bereft has also gained traction in popular culture, such as Stephanie Tanner on Full House.

Although middle child syndrome sounds bad, new research suggests that being a middle child actually has some surprisingly enviable advantages. Contrary to what The Brady Bunch might have taught us, being stuck in the middle can actually help you develop strong leadership qualities later on in life. That's why we rounded up eight reasons you should be proud to be a middle child (or wish that you were). Jan, are you listening?

1. They're skillful negotiators and peacemakers.

When you're surrounded by both older and younger siblings, middle children have to constantly compete for attention and resources, so they can find their own niche within their families. As Catherine Salmon, a professor of psychology at the University of Redlands and coauthor of the book The Secret Power of Middle Children, told Mic, middle children become skilled in seeing things from the other person's perspective as a result of their childhood experiences, which makes them expert problem-solvers later on in life.

"The negotiator role is one they typically have to take up to get what they need in competition with the needs and desires of favored firsts and pampered lasts," Salmon said.

The negotiating and peacemaking skills of middle children can also be used to their advantage socially and in the workplace, which makes them great friends and social supports. In fact, one 1976 study published in the Journal of Personality and Social Psychology found that later-born children had better social skills and were more popular than firstborns.

2. They're more likely to take risks and be creative.

It's true that parents are inclined to pay more attention to their firstborn and younger children than their middle children. A survey of 1,000 parents and 1,000 middle children by TheBabyWebsite.com found that 1/3 of parents admitted that their second child tends to get left out. But not being subject to the intense focus of helicopter parents means middle children are more free to be creative and try new things. For instance, John, 26, from San Francisco, told Mic that his parents paid more attention to his brothers, which led to him spending a lot of time alone. That forced him to come up with creative ways to entertain himself. And let's not forget Malcolm, the titular middle child of Malcolm in the Middle, who ends up being a Harvard-educated child prodigy.

3. They're less likely to buckle under pressure.

Firstborn children tend to be under more pressure to live up to their parents' expectations, which leads to them being at a higher risk of having depression than second- or third-born children, according to one study. Middle children, however, are largely exempt from that kind of pressure, which means they're less likely to be too hard on themselves when they encounter failure or disappointment in adulthood.

John said being the middle child allowed him to grow at his own pace, without being subject to the pressures of getting a job or getting married, as his older brother was. "Being the middle has given me the chance to learn things on my own and learn from not only my own mistakes but my older brothers' [mistakes]," John said. "And having that less pressure made it easier when I did not succeed."

Firstborn children are typically given credit for being natural leaders. But many of the qualities that middle children tend to learn in childhood — such as cooperativeness, relationship-building skills and independence — are also highly valued leadership qualities. (For instance, it might not be a coincidence that a staggering 52% of U.S. presidents have been middle children.)

Salmon said while firstborns tend to lead through dominance, middles lead through persuasion as a result of their negotiating and peacemaking skills. "In addition, middles' ability to think outside the box, the result of greater openness to experience (which also facilitates exploring different niches in the family), lends itself to entrepreneurial approaches," she told Mic.

The conflict-resolution skills that middle children learn aren't just helpful in the workplace — they're also keys to a long-lasting marriage. A study by the University of Washington's John Gottman found that couples who were willing to make compromises and were able to clearly state their positions during arguments had stronger marriages than couples who weren't.

In a survey Salmon conducted for her book, she said she found 80% of the middle children had never cheated on their significant others, while 65% of firstborns and 53% of lastborns had. A 2010 review of birth order literature also found being a middle child had a strong correlation with the ability to be faithful in monogamous relationships.

6. Middleborns are just as smart as their siblings.

According to conventional wisdom and past research, firstborns are the smartest siblings, because their parents give them more undivided attention and encourage them to focus on their studies. But a study by the University of Illinois published earlier this year found that firstborns' IQs are only one point higher, on average, than their younger siblings — a fairly negligible difference.

7.  They get the perks of having both older and younger siblings.

Numerous studies have pointed to the social and mental benefits of growing up with siblings: According to one Ohio State University study, children with siblings had more highly developed social skills in kindergarten than only children, presumably because they were forced to play well with others from a young age. Although recent research has turned this idea on its head, arguing that being an only child has little to no effect on future social development, growing up with siblings has nonetheless been linked to lower rates of divorce and higher rates of overall altruism.

"I loved hanging around [my older sister's] friends and trying to act more grown up like her," Kelsey, a 23-year-old from Massachusetts, told Mic. "On the other end of the spectrum, even though my brother is only a year or so younger than me, he asks me for advice sometimes, which makes me feel good that he wants my opinion and respects it."

In an age where parents are routinely accused of hovering around their kids and making it difficult for them to learn to live independently, the fact that middle children tend to be "forgotten" suddenly doesn't sound like such a bad thing. While other kids suffer from the effects of overparenting, middleborns are largely left to their own devices, which means they have the freedom to solve their own problems and forge a path for themselves in the world — without unnecessary parental intervention.

"It seems a bit counterintuitive, but in a post-helicopter age where many college kids and beyond aren't very good at managing their own time and efforts, perhaps because parents have done too much of this for them, it seems like there might be a real advantage to not be the 24/7 focus for parents," Salmon told Mic. Jan Brady would likely agree.