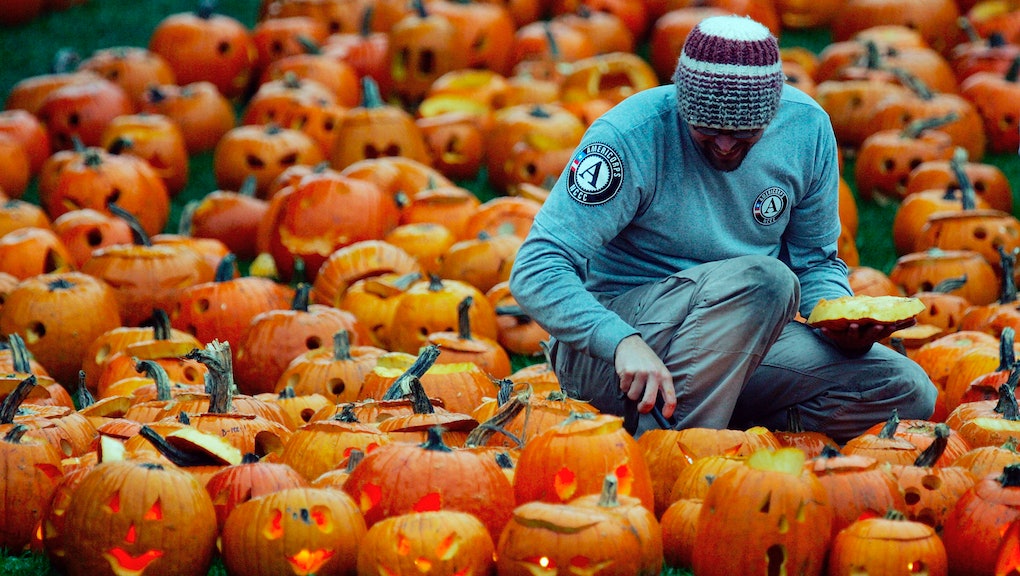 White People and Pumpkins: A History

On October 18, 2014, violence erupted in the streets of Keene, New Hampshire. Police deployed tear gas and "pepper balls" to corral up to 2,000 people, some of whom lobbed rocks, debris, beer cans and bottles of liquor at each other, CBS Boston reported.

Multiple car windshields were broken in the melee. Lampposts were uprooted, at least one vehicle was flipped over, 26 people were hospitalized and 84 more were arrested. One resident heard someone talking about killing police officers, while others reported a group of young people threatening to beat up an old man.

The site of the mayhem was not a political protest, or a response to a sports team winning a championship. It was the Keene Pumpkin Fest, held annually in the city for more than 20 years. Needless to say, P-Fest is not returning to Keene this year.

The role of the pumpkin in American culture has a long and complex history. As a food product, it's become synonymous with Thanksgiving, the mythologized origins of which have been used to soften an ugly history of violence against Native Americans. In more recent years, a near-fanatical pumpkin spice craze has invaded America's coffee shops and supermarket shelves, with Oreos, Pop-Tarts, popcorn and even pork sausage falling victim.

A Starbucks representative told Mic the company has sold over 200 million pumpkin spice lattes since 2003, making it their most popular seasonal beverage, hands down. According to Food and Wine, Americans have spent over $12.8 million on pumpkin-flavored dog food over the past year. Dog food.

However, in the popular imagination, pumpkins are most commonly associated with one all-American ingredient: whiteness.

"In the (white) Northeast especially, pumpkins have long represented an old-fashioned agrarian lifestyle that people took a lot of pride in," Cindy Ott, an American studies professor at St. Louis University and Ludwig Maximilian University in Munich, told Mic in an interview.

Which inevitably raises the question: What is going on with white people and their pumpkins? For clues, we turn to our most trustworthy source — the Internet. Type "white girls" and "pumpkin" into Google, and the top hit is an Urban Dictionary definition for pumpkin spice lattes.

"A drink from Starbucks that many white girls drink during the fall while dressed in boots (typically Uggs), yoga pants (or leggings of some sort), and a jacket," it reads.

Yet the majestic pumpkin is about more than just white girls, Uggs and lattes. Over the past year in particular, its political symbolism has become significantly more topical.

Pumpkins and politics? Ott, who wrote the book Pumpkin: The Curious History of an American Icon, explained that in the 19th century, the pumpkin's regional significance underwent a shift. Where New Englanders had long held it as a positive symbol of bounty and agrarian simplicity, Southerners saw it as denoting backwardness, even impoverishment.

"Industrialization was taking over the U.S. at the time," she said, "and pumpkins never made a lot of money on a large-scale for their farmers." Southern agriculturalists, with their massive plantations and slave labor-driven economies, eventually appropriated it as a symbol of tenant farming and poverty, often associating it with the black agricultural underclass.

"Cartoons and illustrations in the South associated blacks with pumpkins as a form of derision," Ott said. "It's part of why blacks didn't embrace pumpkin pie in the same way. Black Thanksgiving traditions tend to involve sweet potato pie more."

Fast forward to 2014. As uprisings fueled by anti-black police violence spread across the United States from Ferguson, Missouri, the Keene, New Hampshire, pumpkin riot — as it is now known —  became shorthand for a how the armor provided by white privilege fuels racial inequality in America.

"Keene really demonstrated the stark and absurd distinctions between the way the American public and media perceives of blacks and whites in the context of crime," Charlton McIlwain, an associate professor at New York University, told Mic via email.

Where right-wing pundits and members of the mainstream media framed black unrest as the handiwork of "thugs," whose behavior demonstrated cultural pathologies ranging from rampant fatherlessness to so-called "black-on-black crime," similar descriptors were not applied to white youth in Keene.

"Despite the overwhelming and continually mounting evidence that blacks and whites are perceived, represented and treated different for engaging in the same kinds of behaviors many still insist that there is no real distinction at all," McIlwain wrote.

For Ott, the contrast is equally stark.

"What happened in Keene is part of an old tradition," she said. "Smashing pumpkins and misrule at this festival are seen as an affront, but an affront that lets people let loose without challenging norms. The white kids here are just acting out. Black people are actually trying to change a violent political system."

But pumpkins have always been inherently political. They are among the oldest domesticated plants in the Americas, according to Ott, and were used in harvest celebrations from Oaxaca, Mexico, all the way to the northern U.S. for nearly 10,000 years. After Europeans invaded, the plant took on new, varied symbolism. The most popular iteration today, the pumpkin spice fad, hearkens to an era of simple agrarianism and citizenship articulated through old-fashioned values in the Northeast — one defined by seasonal trips to the pumpkin patch and carving competitions hosted by annual festivals.

Or as the Internet might put it, "white people shit." Yet, as pumpkins are increasingly entwined with whiteness, entire threads of history are being erased in the process. Indigenous histories, black histories, even "white-people-who-don't-like-pumpkin-spice-lattes" histories, all fall to the wayside of this monolithic narrative.

When the Keene, New Hampshire, city council voted not to invite the Pumpkin Festival back this year, it was a symbolic loss for local whiteness. That said, it also created space for new narratives to take shape and maybe account for the complex, multi-cultural history that pumpkins actually have in this country. Then again, maybe not: The Pumpkin Festival's new home is nearby Laconia, which according to recent U.S. Census data, is 96% white.