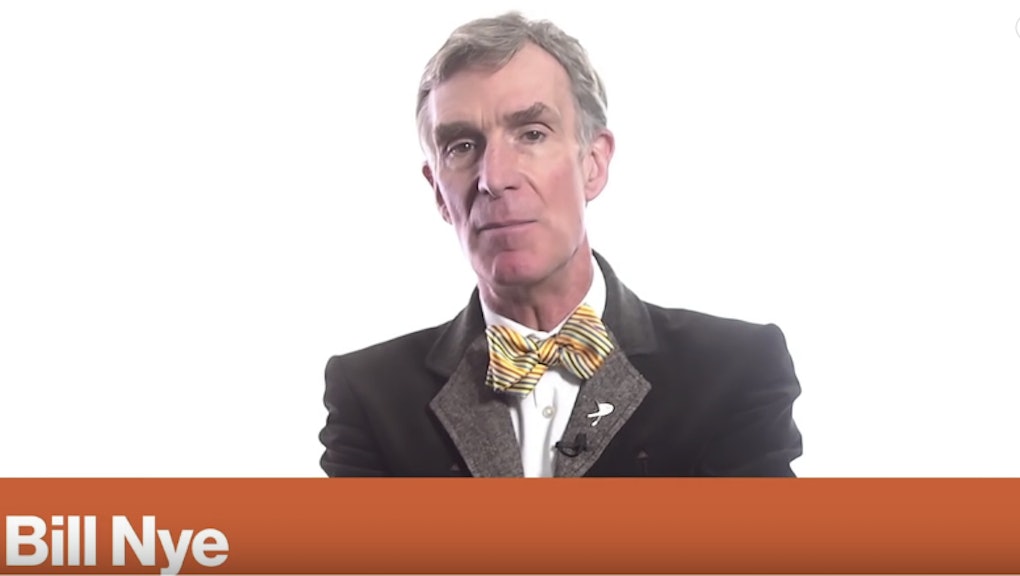 Between legislatures introducing hundreds of abortion restrictions and the bevy of attacks made on Planned Parenthood, 2015 has been a harrowing year for women's reproductive rights. While some have deployed defensive tactics like storytelling and hashtag activism to counter the attacks, a unique ally has risen among the ranks, wielding his scientific knowledge: Bill Nye.

Nye took on the idea of life at conception in a Big Think video released this week.

As Nye points out, scientists have disputed the ideology behind abortion bans and other laws based on ideas like the concept that life begins the moment an egg is fertilized.

"You cannot help but notice — and I'm not the first guy to notice — you have a lot of guys of European descent passing these extraordinary laws based on ignorance," he says. Even beyond legislators allowing their "interpretation of a book written 5,000 years ago" to influence the abortion-related laws they pass, Nye says, everyone must do better to "respect the facts," when it comes to women's reproductive rights at large.

"Recommending or insisting on abstinence has been completely ineffective," he says. "Closing abortion clinics, not giving women access to birth control has not been a way to lead to healthier societies."

Research backs Nye up. One 2007 study found that abstinence-only education has no impact on preventing teens from having sex, while another showed that teen pregnancy rates are higher in states with abstinence-only sex education curriculum. Studies also show that abortion restrictions as well as birth control access restrictions negatively impact women's health.

"We have so many more problems," Nye says in the video. "To squander resources on this argument based on bad science on just lack of understanding is very frustrating."

Ultimately, Nye summarizes what women themselves have been saying about their reproductive rights for years.

"When it comes to women's rights with respect to their reproduction," Nye said, "I think you should leave it to women."