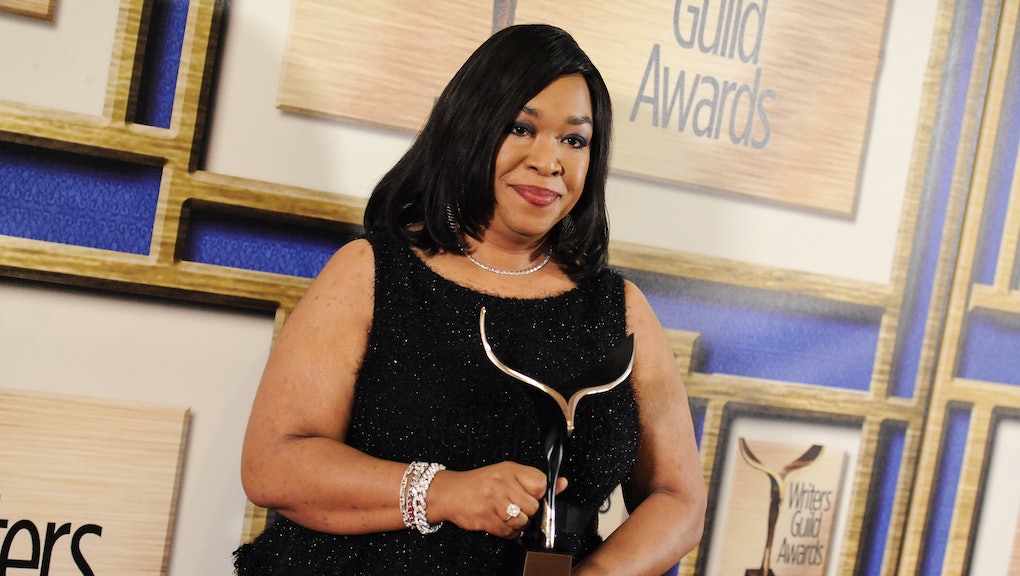 If you ever find yourself in ShondaLand, you might want to bring some lube. TV shows like Scandal, Grey's Anatomy and How to Get Away With Murder are all delightfully sex-positive, thanks to Shonda Rhimes' penchant for bringing trailblazing sex scenes to network TV.

In a new interview with Rhimes in the October issue of Women's Health, she discussed why sex positivity on network TV is so important to her.

"I have three daughters, and I find it fascinating that you can shoot someone in the face on network television, show the whole thing, watch their brains fly out of the back of their head, and no one blinks," Rhimes told the magazine. "But people are shocked when you show anybody having sex."

"I hope my daughters grow up to have amazing sex," she said in the interview. "I really do. I do not hope they grow up to shoot someone in the face. You know what I mean? I feel like there are ways to represent women owning their sexuality and having a strong point of view about it and it not being this taboo thing that's hidden in some closet somewhere."

Shonda isn't the only mom to see value in keeping it real with her daughters when it comes to sex. Thanks in part to Lena Dunham's #AskYourMother campaign, which encourages young women to ask their mothers if they've had abortions, more and more moms are speaking with their daughters about reproductive health issues and openly encouraging them to have healthy, shame-free sex lives.

Given her track record, it's no surprise that Rhimes is one of them. After all, ShondaLand has produced some incredibly progressive depictions of sex onscreen, from Olivia Pope and Fitz getting it on in the White House on Scandal to Connor Walsh engaging in some controversial butt play in the pilot of How to Get Away With Murder.

Viola Davis, who plays Annalise Keating in the latter show, even told Entertainment Weekly recently that working with Rhimes helped her realize there were roles available for sexually empowered women of color. "There were lot of things that people did not allow me to be until I got [the role of] Annalise Keating," Davis said in the interview. "I was not able to be sexualized. Ever. In my entire career."

So props to ShondaLand for helping the TV-watching masses realize that sex is totally shame-free — and props to Rhimes herself for being such an awesome mom. We couldn't possibly be more jealous of her daughters.