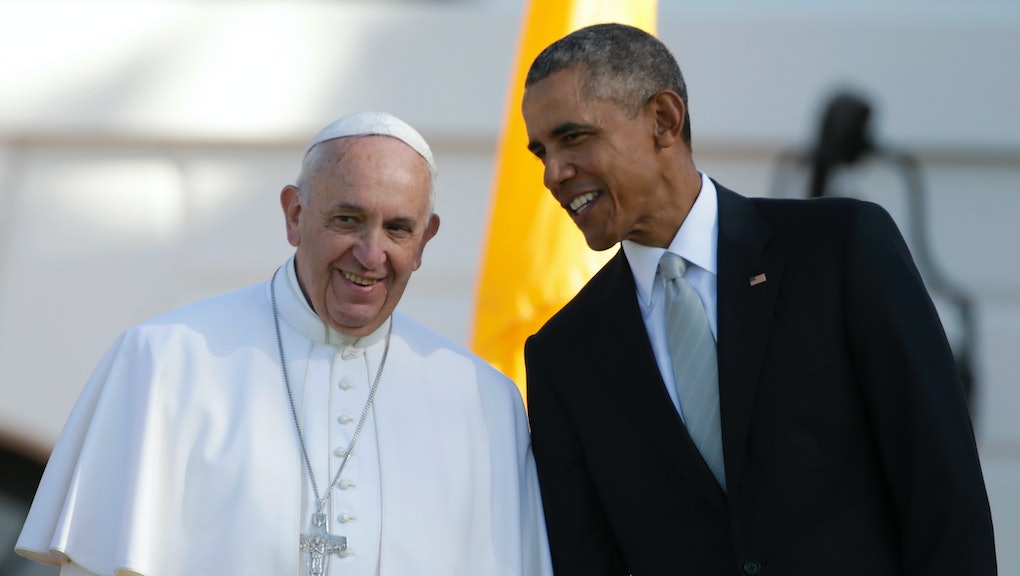 Pope Francis may be the highest authority of the Catholic church, but that doesn't mean he can't still let loose and rock out. That's right: Aside from being an international policymaker who's traveling the world and speaking with world leaders and the United Nations, the pope is also becoming a pop-rock musician. Rolling Stone reports the pope will be releasing an album titled Wake Up! on Nov. 27. It will feature 11 contemporary songs featuring Francis' own words.

The album, which became available for pre-order on iTunes Friday morning, was produced by Don Giulio Neroni, a creative director who has worked with a number of popes to create musical compositions that meet their style, both creatively and ethically. He told Rolling Stone:

For many years, I've been the producer and the artistic director of albums by the pope. I had the honor to work with John Paul II, Benedict XVI and now Pope Francis. As in the past, for this album too, I tried to be strongly faithful to the pastoral and personality of Pope Francis: the pope of dialogue, open doors, hospitality. For this reason, the voice of Pope Francis in 'Wake Up!' dialogues music. And contemporary music dialogues with the Christian tradition of sacred hymns.

Below is the full track list from Wake Up!, according to iTunes:

"Wake Up! Go! Go! Forward!" is the first track released and can be heard at the album's official website. The lyrics speak to the pope's progressive stance on several issues, while urging people around the world to effect change in their communities and live better lives: "The Lord speaks of a responsibility that the Lord gives you/ It is a duty to be vigilant/ Not to allow the pressures, the temptations and the sins to dull our sensibility of the beauty of holiness."

Check out the track and more from Francis' new album here. There's no telling yet whether this will match up with Pope Emeritus Benedict XVI's 2009 album, which featured the Royal Philharmonic Orchestra and the Choir of the Philharmonic Academy of Rome.