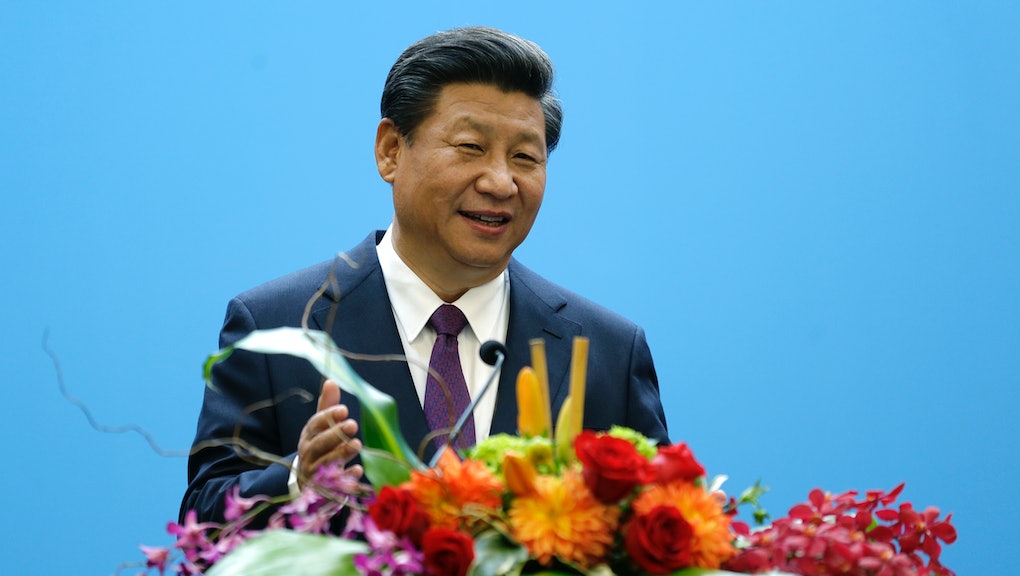 Who Is Xi Jinping? Here’s What You Should Know About China’s President

Chinese President Xi Jinping is midway through a weeklong United States visit that marked the leader's maiden voyage to the U.S. as president. On Thursday, Xi landed in Washington, D.C., where he met with President Barack Obama on Friday to discuss cybersecurity, Beijing's economic policies and turf disputes over land in the South China Sea, the New York Times reported.

President Xi (pronounced 'she') made headlines this week in part for updates about his state visit but also due to the timing of his trip. Take China's majorly rocky economy this summer, add to that new details about a U.S. government data breach that could have been orchestrated by Chinese hackers (something the Chinese president has denied) and you've got one complex geopolitical cocktail. Perhaps to alleviate some political tension, Xi revealed on Friday that China will be enacting cap-and-trade measures.

Here's what you need to know about China's leading man:

His personal life: For Xi, politics is personal. The 59-year-old Beijing native is the son of Xi Zhongxun, a founding father of the Communist Party. Xi Jinping studied chemical engineering at Tsinghua University in Beijing, was accepted into the Communist Party in 1974 and served as a local party secretary, the BBC reports.

In 1987, Xi married Peng Liyuan, a folk singer and Chinese army general. They have one daughter, Xi Mingze, who graduated from Harvard University in 2014, according to the New Yorker.

His politics: Politically, President Xi is considered to be pro-business, but he's also big on building national pride. He is responsible for coining the phrase "Chinese Dream," and his platform/mantra as China's leader since taking office is fighting for "the great renaissance of the Chinese nation," in his own words.

With his U.S. tour coming to a close, we're bound to see President Xi continue to make headlines as his cap-and-trade promise gains legs. He also is expected to be in power for the next decade, according to the BBC.