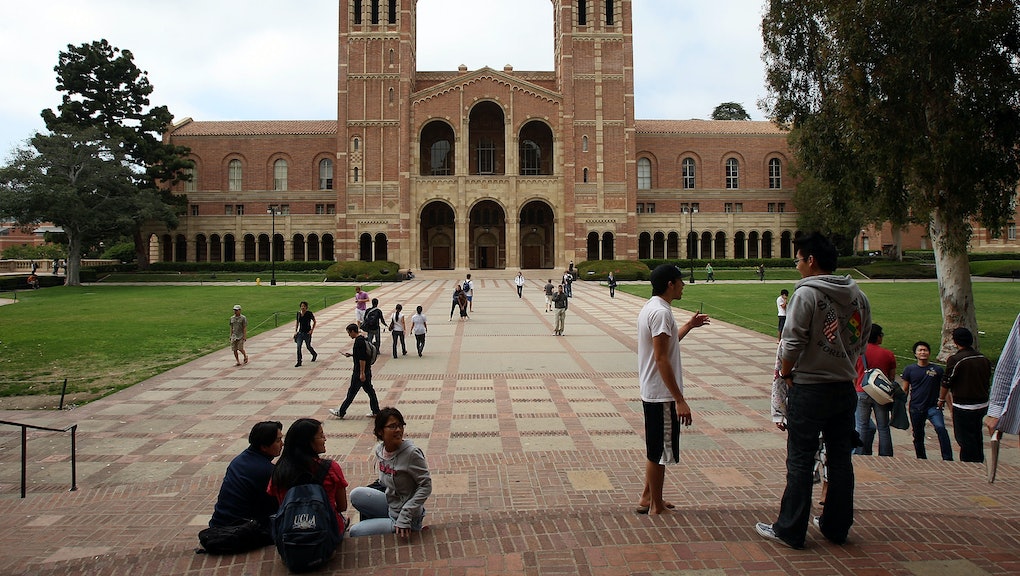 What does it take to deliver a quality education to students from every corner of society?

Money helps. Harvard University has an endowment larger than about half the world's economies, and with it an unrivaled ability to tweak the cost of its world-class education to be inclusive. Parents making less than $65,000 a year are not expected to pay for their children's college degree, and families making between $65,000 and $150,000 pay 10% or less of their income. Over a fifth of the students' families pay nothing. Harvard's extraordinary largesse ensures it can pave its way to true economic diversity among its student body.

But if you take a look at the New York Times' College Access Index, which ranks the top colleges doing the most for low-income students across the country, Harvard doesn't rank at the top of the chart. In fact, it doesn't show up until No. 11.

What exactly is California doing differently?

The rankings: The College Access Index ranks schools "based on the share of students who receive Pell grants (which typically go to families making less than $70,000); the graduation rate of those students; and the price that colleges charge both low- and middle-income students."

The list provides a glimpse into a dimension of college rankings that rarely gets discussed amid the typical obsession with academic performance. Despite all the lip service from politicians and policymakers on the importance of higher education, there's rarely any scrutiny of which colleges are actually able to deliver on the promise of upward mobility for the masses.

Harvard can ensure that low-income applicants who are accepted receive generous aid. But the reality is that most low-income students don't have the record of academic excellence it takes to get in, and many who do aren't aware of the free or nearly free cost of attendance. If you come from a neighborhood where relatively few adults went to college, the schools you consider tend to be the ones right in front of you — the ones down the street, the ones you can attend without leaving your home.

So the success of a state school system isn't entirely shocking. That said, California's widespread superiority across the top of the rankings is striking, and reflects several deliberate steps the state has taken to make college more accessible to low-income students.

Smart and generous aid: California has a long record of injecting large sums of cash into its higher education system, and of the aid required to ensure that the system is available to more than just its most privileged residents.

"Access to higher education for low-income students has been a long-standing value of the California public higher education system, from community colleges to the University of California," Thomas Harnisch, director of state relations and policy analysis at the American Association of State Colleges and Universities, told Mic. "This dates back to the California Master Plan of 1960."

California allots an exceptional amount of money to special grants such as need-based "Cal Grants," which students don't have to pay back.

"The state Cal Grant program is remarkably generous for University of California students, and the UC system has further financial aid that it uses to bring the entire cost of a college education within reach," Debbie Cochrane, research director at the Institute for College Access and Success, told Mic.

The aid, which can be used to cover costs beyond tuition, such as housing, books and food, supplements federal financial aid that often doesn't cover the full cost of attendance.

Priorities: The generosity of California's aid program is astonishing in light of its large state budget problems in recent years. In many states across the country, budgets ravaged by the recession have been balanced on the backs of college students, and funding for aid has been slashed steadily. But California has gone about making its cuts to the education system differently. Instead of excluding needy students, it excluded bad schools.

"In California when financial aid had to be cut, the state chose to cut out poorly performing schools from the grant program rather than restrict eligibility for students," Cochrane explained.

For many higher education advocates, this was a massive student win. The move was wasn't restricted to severing funding to highly controversial for-profit schools, but it had the effect of cutting them out, since they consistently failed to deliver results for their students.

So while California has made cuts to its financial aid for college students, it's strived to ensure funding restrictions cause the least harm possible.

Community colleges: Another explanation for California's success with graduating students through its university system is its nationally renowned community college system, which is remarkably both comprehensive and inexpensive.

Finally, the University of California makes great efforts to reach out to low-income students through aggressive recruitment and inform them that college is a real possibility. Last year, it partnered with College Board to reach out to high-achieving students from poor neighborhoods to acquaint them with the college process.

The takeaway: One confounding variable for California's success could be that the state has a disproportionate amount of low-income households spread among an enterprising immigrant population that's unusually likely to be upwardly mobile and view education as a necessity for entering its high-tech economy. But by all accounts, California's government deserves credit for taking advantage of that dynamic.

But none of this is destined to last. California has indeed been making cuts to funding for state colleges, and the system is relying on more international and out-of-state students to make up the difference.

The road ahead is unclear. But it's hard to miss that California's commitment to its students has paid well so far.