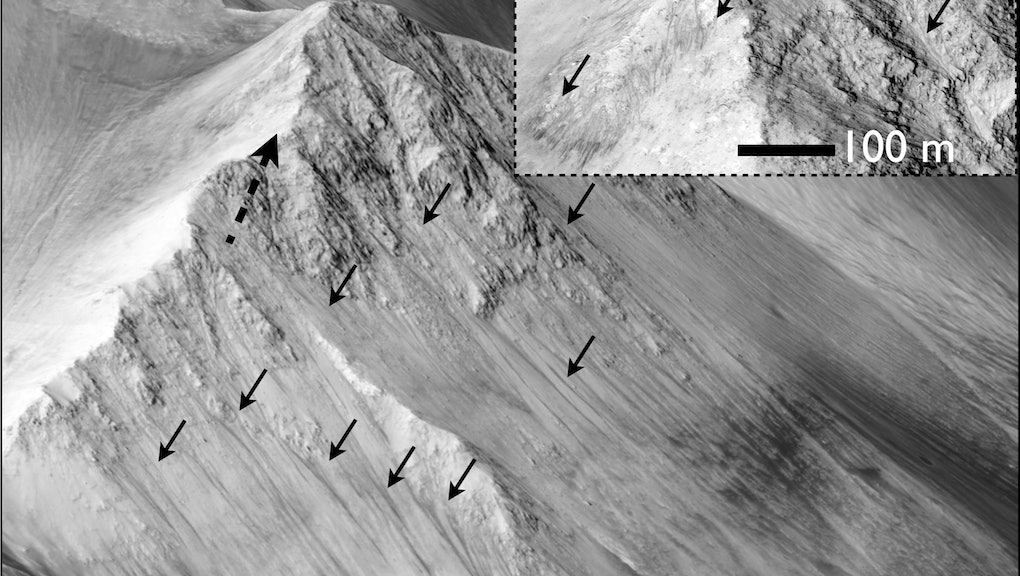 In a much-anticipated press conference on Monday, NASA researchers gave the world a major update on Mars: It has liquid water flowing on its surface.

The agency announced that a phenomenon called recurring slope lineae observed on the Red Planet is the result of hydrated salt flows that contain liquid H20 on the Martian surface.

RSL are narrow, finger-like streaks on Martian cliffs and slopes that form seasonally on warmer areas of Mars' surface. While low atmospheric pressure and freezing temperatures on Mars would quickly dissipate any pure water on the planet's surface, water with a high salt content could remain stable in liquid form.

"When most people talk about water on Mars, they're usually talking about ancient water or frozen water," Georgia Institute of Technology graduate student Lujendra Ojha said in a press release. "Now we know there's more to the story. This is the first spectral detection that unambiguously supports our liquid water-formation hypotheses for RSL."

The announcement was anticipated over the weekend by the space science community, some of whom guessed the news in advance. NASA Watch's Keith Cowing wrote last week that two of the press event's speakers, Ohja and University of Arizona planetary geology expert Alfred McEwen, have previously co-written papers on recurring slope linae on Mars and how they may be formed by flowing liquid.

A reader also tipped Cowing off to the fact that the two scientists were appearing at European Planetary Science Congress 2015 with other researchers Monday to present a paper titled "Recurring Slope Lineae on Mars: Atmospheric Origin?"

The theory was echoed Sunday by other publications, including the Boston Herald.

In 2014, a NASA team concluded the gullies that cross the planet were likely formed by dry ice (frozen carbon dioxide) rather than liquid water, though lead author Colin Dundas told Space.com that RSL remained a promising lead for discovering water.

Scientists have long known Mars has large quantities of water in the form of polar ice caps and glaciers, but the discovery of liquid water is a game-changer that may up the odds of discovering evidence life exists or once existed on the Red Planet.

"If they're announcing that they've found easily accessible, freely flowing liquid water under the surface — which is one of the theories we've been hearing for years and years — that has massive implications both for the potential for life on that planet and sustainability of humans," former NASA Mars program head Doug McCuistion told the Boston Herald. "That would be highly enabling and might be the game-changing trigger for both finding life and hurrying up and getting people to Mars."

As the science community celebrates the historic find, one Twitter user had an important reminder for space science fans: