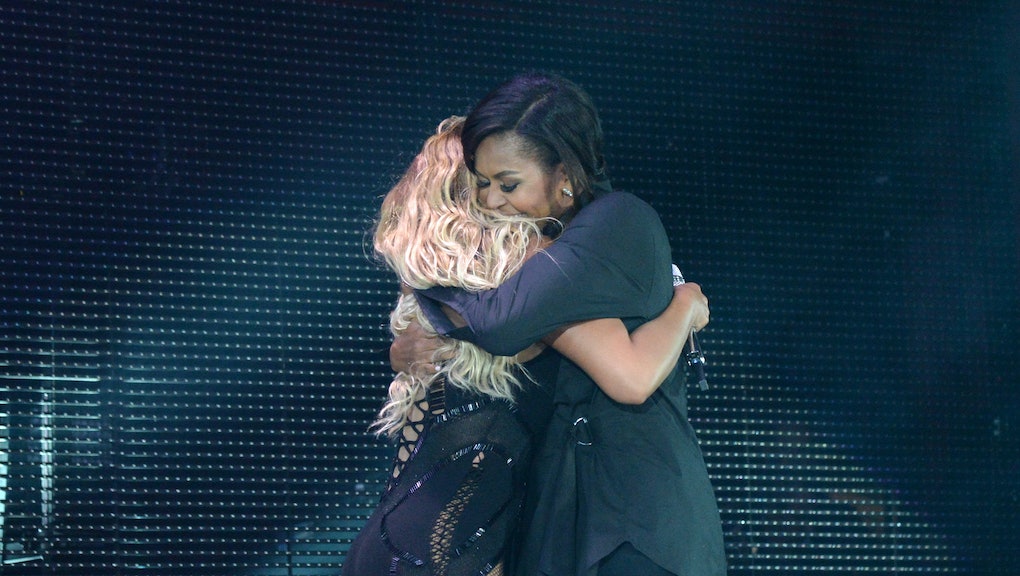 Two of the most powerful women in the world met Saturday to spread a powerful message about gender equality: Poverty is sexist.

"Right now, 62 million girls worldwide are out of school," first lady Michelle Obama said in a video message to an audience of 60,000 attending the Global Citizen Festival in New York City's Central Park. "This is truly a moral issue. This is also a serious economic issue. Girls that go to school earn higher salaries and they can even help boost their entire country's economies."

The audience listened patiently, as they had all day, as world leaders made promises to end global poverty between sets from Coldplay, Ed Sheeran, Tori Kelly and Common. However, there was one person many fans wanted to hear from more than any other.

"Be patient a little bit longer, this is important," Salma Hayek Pinault told the crowd growing visibly restless as the Queen's set drew near. Eventually, the beat dropped. The woman Hayek Pinault hailed as a "true philanthropist," a "collector of Grammys" and a "volcano of talent" took the stage.

Beyoncé slayed with a set highlighting feminist icons and messages. She ended the performance by sharing a hug with Obama, capping on an epic day of music and global philanthropy. The ecstatic applause that followed showed once again the power the two can have when they join forces.

"Poverty is sexist." This year's Global Citizen Festival, an annual daylong musical event organized by the Global Poverty Project to raise awareness about efforts to end global poverty by 2030, had a special focus on ending gender inequality.

"We're looking to empower girls and women," host Stephen Colbert said early in the day. "Beyoncé can't do it by herself."

Leaders of nations, CEOs and cultural visionaries all shared stories and commitments. The prime minister of Sweden announced his commitment to create the world's first feminist government and dedicate $50 million to improve sanitation in developing countries, which often stands as a barrier preventing girls from attending school. Laverne Cox reminded the world the struggle for gender equality also includes transgender and gender fluid individuals.

"It's not that there is a lack of money in this world ... but where the money goes is military. It's things that are useless and that are not useful to society," Nobel Prize-winning activist Malala Yousafzai told the crowd. "It is a book and a pen that can change the life of a child — it's not a gun."

At the event, Obama announced the launch of the #62MillionGirls campaign, which is dedicated to get the world's 62 million women and girls who are unable to receive a quality education get the aid they deserve. She urged everyone in the audience to log on to Twitter and Instagram and share something they learned in school. She posted her own shortly after the announcement.

Thousands have offered their own stories, including a long list of celebrities, extending the festival's star power.

Beyoncé's set reflected these same empowering messages. She spoke to the crowd in the same way politicians had earlier in their calls for action. Rather than encouraging fans to call their governments and spread the word, she worked to invigorate the crowd and magnify the connections made that day.

Starting with the slow and dramatic rendition of "Crazy in Love," which she recorded for 50 Shades of Grey, she ran through her most evocative feminist anthems — "Single Ladies (Put a Ring on It)," "Flawless" and "Run the World (Girls)."

The set was essentially a condensed version of her recent performance at the Made in America festival, mixing in powerful feminist sound bites such as Ronda Rousey's "do-nothing bitch" speech, Maya Angelou's "Phenomenal Woman" and Chimamanda Ngozi Adichie's striking definition of feminism that appears on the album version of Beyoncé's "Flawless."

Beyoncé's set helped to provide a stirring, emotional expression of the goals the rest of the event's leaders were trying to communicate.

"I am honored to follow a women whom I admire and adore, some one who believes as passionately as I do in the boundless promise of girls worldwide," Obama said as Beyoncé passed her the mic. Obama described equal access education as being "at the core of our work to end global poverty. It's the only way to ensure these girls can fulfill their potential, provide for their families and contribute fully to their countries."

The words rang with new meaning after the girl power of Beyoncé's set. Fans left understanding the steps individuals can take to end gender inequality, and hopefully the inspiration to make it happen. Because as Colbert so sagely said, Beyoncé can't do it alone.