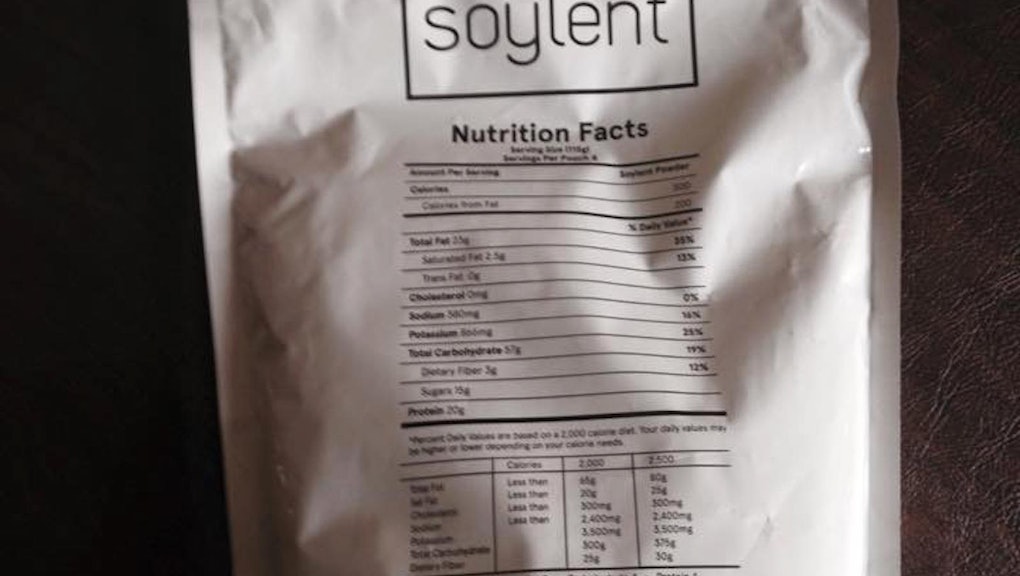 I first read about Soylent in 2014 while working at China Central Television. Since then, the drinkable superfood has taken Silicon Valley by storm with a claim its creators believe could change the world.

Working in media, with ever longer hours and ever shrinking lunch breaks, it felt inevitable I would one day experience Soylent in some form. I don't deny I was more than a little curious to try a food so nakedly associated with consuming human remains.

"Actually, that is one of the misnomers," Mason English, an aspiring medical student, told Mic of the product's unfortunate connection to Soylent Green. "It's actually based off of the book Make Room! Make Room!" In the 1966 novel by Harry Harrison, from which Soylent Green is based, "Soylent" is a portmanteau for a more banal food product made from soy and lentils. "The connotation from the movie is just an unfortunate thing," English said, adding roughly 90% of his daily calories came from the drink.

Today, Soylent comes in two forms: a powder mix, known as Soylent 1.5, and, as of September, a ready-to-drink bottled version called Soylent 2.0. Previous iterations 1.0 through 1.4 are now off the market but can still be purchased on unofficial online exchanges like the Soylent Market sub-reddit.

The story of Soylent: Soylent is the brainchild of Robert Rhinehart, a millennial tech entrepreneur who was inspired to create the product after finding he had no time to prepare nutritious food while working on a startup.

"I was freshly graduated, working on a startup and living off ramen and quesadillas," he told Venture Beat in 2013. "I didn't have the time, energy or motivation to eat well, but my diet was harming my health and that harmed my productivity. It was really frustrating and I thought there had to be a more efficient way to get the nutrients we need."

Thus, with a little tinkering, Soylent was born.

With a flair for public relations, Rhinehart wasted no time causing a stir. In 2013, he published gushing results on his personal blog of an experiment that saw him consume virtually nothing but his new concoction for a month. "I feel like the six-million-dollar man," Rhinehart wrote. "My physique has noticeably improved, my skin is clearer, my teeth whiter, my hair thicker and my dandruff gone."

Investors soon followed. First, a crowdfunding campaign looking for $100,000 banked more than $750,000 from more than 6,000 backers. Before the year was out, that was followed by $1.5 million from venture capital shops Andreessen Horowitz and Lerer Hippeau Ventures, as well as private investors. Demand rapidly exceeded supply and, for a time in 2014, shipment to new customers could take between 10 and 12 weeks. A subsequent round of funding raised $20 million this year. Andreessen Horowitz has even served the drink at cocktail parties.

Drinking Soylent: Opinion was mixed when it came to the actual nuts and bolts of drinking Soylent. Mic spoke to a number of people who were enthusiastic about the product. "You get a slightly oaty, slightly malty, slightly vanilla taste," Nathan Ladd, a 38-year-old who works in technical sales, said. "There's almost a depth to the blandness." English described Soylent 2.0 as tasting "like the milk after you've had a bowl of Cheerios."

But the praise was not universal.

"I can't say I enjoy it," Charlie Wilkin, a 17-year-old college student from Pennsylvania who uses Soylent 1.5, said. "It tastes like bread gone horribly wrong, and the taste hangs around in your mouth for several minutes after swallowing." Still, Wilkin estimated he gulped down the food replacement for roughly 30% of his daily calories. "I still prefer it to my mother's cooking."

In an email to Mic, Soylent director of communications Nicole Myers said Rhinehart was traveling and unavailable for comment. The company offered no response to a list of questions emailed to Myers.

I tried Soylent 1.5 on Sept. 26, 2015. I was ravenous, slightly hung over and more than ready for the fantastical promises made on Rhinehart's blog. The 460 gram bag carries 2,000 calories, broken into four distinct servings of 500 each. After mixing with water, some solid shaking and 45 minutes in the freezer, I was ready. The taste was subtle and less creamy than expected. It tasted mostly of oat, with its 15 grams of sugar rounding out the aftertaste. I didn't hate it as much as Wilkin, but it was nothing to write home about. I drank a mug full and then another before I felt sufficiently sated to head out.

As I left my apartment, the first immediate drawback of Soylent 1.5 became apparent, it was not mobile. Since the product is intended to be brewed all at once and served chilled, it can't be placed in any kind of to-go container. By not apportioning Soylent into individual single-serve packages, the company may save on shipping, but only at the price of making a Soylent-only day considerably more difficult. There was, however, a silver lining in one of Soylent's competitors.

At first, Ambronite appears very similar to Soylent. The Finland-based company also started in 2013, and benefited from an insurgent crowdfunding campaign before attracting major investors, including $600,000 from YouTube co-founder Jawed Karim. Like Soylent, Ambronite also declares itself capable of bringing out the best in its users, with the company website proudly proclaiming drinkers can "reach optimal productivity in 2 min."

But that's where the similarities end, at least according to co-founder Simo Suoheimo. "Synthetic products like Soylent are made out of cheap, artificial ingredients," he told Mic. "Instead of feeding people cheap, synthetic supplements that lack necessary nutrients, Ambronite consists of some of the most nutrient dense foods on the planet, such as high-grade organic oats, organic nuts, wild herbs and arctic berries. It's like comparing nutritious wild berries to vitamin pills."

Unlike Soylent, Ambronite comes in a number of individually sealed packets, each containing 500 calories worth of powder. One packet poured out neatly into a green container that came with my order. Mix with water with a firm shake and voilà.

Perhaps because of Soylent's concoction of "cheap, artificial ingredients," by 4 p.m, I was starving. I had expected Soylent to keep me satisfied for longer, but after an unusually energy-burning day, I gave them the benefit of the doubt. I dodged into a café restroom to assemble my first Ambronite drink.

It tasted like mud. And for such a bad-tasting mashup of fruits, herbs and grains, the $10 per bag/meal price tag seemed that much more off-putting. (Soylent, by comparison, comes in at less than $2 per meal). The final result was a granular, earthen soup that looked considerably browner than I had imaged. It became rapidly apparent the green container was just a clever marketing ploy to give the drink a mystical wheatgrass-like aura. It was all very far away from video like this posted to the company website.

The product claims to eliminate hunger for four to five hours in two minutes. In fact however, the sludge was so vile that it took me closer to 30 minutes to finally choke it down. I put the container in my backpack afterward without even washing it out and headed home. Whatever nutritional benefit offered was more than offset by the slightly vomitus feeling I had as I left the café.

By 7 p.m, I had a headache, I was irritable and I found myself craving food even though I wasn't hungry. I passed delicately set tables of New Yorkers preparing for an evening meal in the cool autumn air and looked at their entrees with the longing and intensity of a crack addict.

At least one nutritionist suggested I might not be alone. "There are so many constituents of food that science has yet to discover and identify. We have only just scraped the surface in terms of knowing what foods are actually made of,"  Shabnam Ahamed Greenfield, a registered dietician in New York City, told Mic. "It's impossible to replicate real food with these substitutes and they do not take into account the complex network of nutrient synergies that occur in real foods."

Positive reviews? On their website, Ambronite proudly boats review after review of happy customers, each more glowing than the last. Few however seemed more in Ambronite's corner than Ari Tulla. Tulla, the 37-year-old co-founder of startup BetterDoctor, reported, "I live a busy life of a startup founder that comes with a prescription of strange working hours. I lived one week solely with Ambronite, and it was a great and healthy fix for busy moments!"

Tulla, who is based in San Francisco, was slightly less glowing when contacted by Mic. "I had no idea how much I enjoy and miss a proper mean before I tried to be without one for a week," he said. "Drinking meals saved plenty of time, but felt I socially isolated and bored."

Products like Soylent and Ambronite are not alone. While they are perhaps the most well-known items on the market, the drinkable space is flooded with competitors such as Queal, SoylentLife, Nano, Mana and Purelent.

More than about taste: The real problem with drinkables goes far beyond any individual complaints users may have about taste. The social implications alone are enough to make anyone wary.

The world today is blessed with a more abundant and diverse food supply than at any time in human history. Devolving that rich legacy into a series of sludge shakes sounds more like a a nightmarish Ray Bradbury dystopia than something serious people should consider. In more practical terms, a product designed for techies too busy for lunch today can just as easily be used as an incentive to destroy a relaxing workday lunch for everyone else tomorrow.

The drinkables also devalue the enjoyable experience of eating to a soulless task of accumulating calories, proteins and carbohydrates. While we may not often reflect on it, the reality is that eating is far more than that.

"Eating breakfast, lunch and dinner with people you care about is hugely valuable," said Tulla. "We need social interaction and breaks in our busy days."

On Sunday, I ate this hamburger at around 11:30 a.m. It was fucking great.