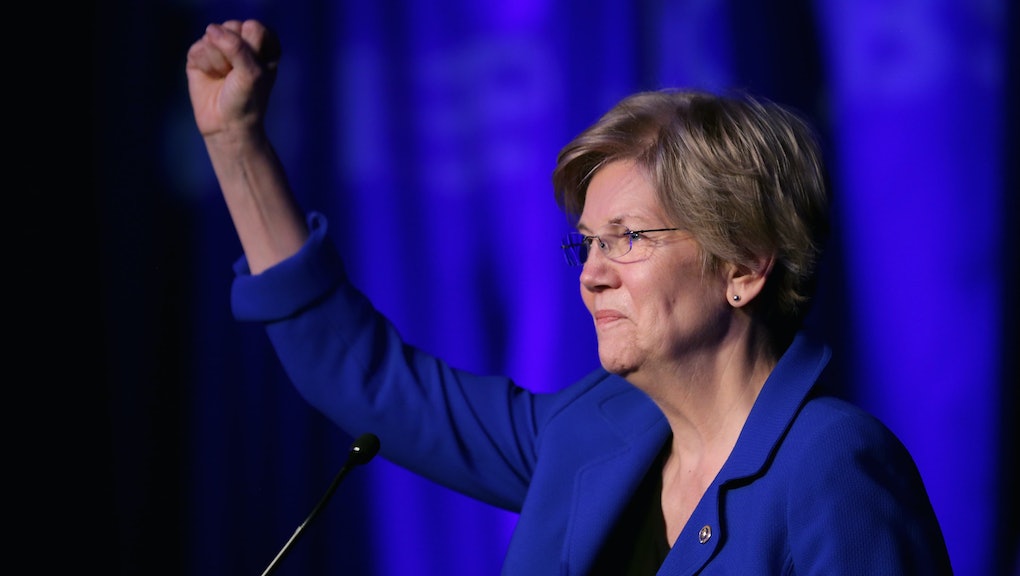 One of the central dilemmas causing a huge rift on the left is whether it should focus more on race or class in diagnosing America's crises. U.S. Sen. Elizabeth Warren may have just figured out a way to bridge the gap.

Speaking at the Edward M. Kennedy Institute for the U.S. Senate in Boston on Sunday, the Massachusetts senator delivered an impassioned address arguing that the pervasiveness of police brutality today shows that the civil rights revolution of the 1960s was incomplete — and a new movement is needed now.

"We've seen sickening videos of unarmed, black Americans cut down by bullets, choked to death while gasping for air, their lives ended by those who are sworn to protect them," Warren said. "We must be honest: Fifty years after John Kennedy and Martin Luther King Jr. spoke out ... violence against African-Americans has not disappeared."

Lamenting that America looks like a "war zone" to many communities of color, Warren embraced the language of the Black Lives Matter movement, invoking slogans such as "hands up, don't shoot" and adopting the movement's demand that society "say the names" of those who have perished at the hands of the police.

The speech: Warren's remarks may be the most forceful defense of the grievances of Black Lives Matter by a federal lawmaker with huge sway in Washington to date. But that characterization risks obscuring another one of its novel qualities: It tied her classic theme of inequality in the economy to the struggle for black equality.

The most compelling analysis in Warren's speech was about how the intersection of racially discriminatory policies with the embrace of the wealthy during the Reagan revolution has uniquely disenfranchised black America. She argued that striving to end the dynamics of capitalism that lead to wealth and income inequality is not a sufficient condition for ending racism, but it is a necessary one.

"Economic justice is not and has never been sufficient to ensure racial justice. Owning a home won't stop someone from burning a cross on the front lawn. Admission to a school won't prevent a beating on the sidewalk outside," Warren said. "But when Dr. King led hundreds of thousands of people to march on Washington, he talked about an end to violence, access to voting and economic opportunity. As Dr. King once wrote, 'The inseparable twin of racial injustice is economic injustice.'"

Warren's speech threaded the needle on emphasizing the specific nature of black suffering and the way in which it is tied to broader systemic mechanisms of economic inequality that afflict "all families," regardless of their color. In other words, the way she navigates the predicament of emphasizing race or class in her analysis of America's greatest ills is by opting out of choosing. Her insight is that they both matter.

Police brutality: Warren contends that the violence against black communities at the hands of the police today echoes the violence African-Americans have encountered time and time throughout American history.

"Once again, the task begins with safeguarding our communities from violence," she said. "We have made progress, but it is a tragedy when any American cannot trust those who have sworn to protect and serve." To end it, she says, there must be a serious re-evaluation of how police do their jobs.

"Policing must become a truly community endeavor — not in just a few cities, but everywhere," she said. "All police forces, not just some, must be trained to de-escalate and to avoid the likelihood of violence. Body cameras can help us know what happens when someone is hurt."

Warren aligned herself with a number of the key focal points on police reform that have been brought to the fore by Black Lives Matter in campaigns such as Campaign Zero. She touched on the idea of racial diversity of police forces, community relationships, de-escalation training and body cameras.

The reaction: Warren's specific policy prescriptions weren't quite as bold as her embrace of Black Lives Matter rhetoric. There was an absence of a full-throated repudiation of "broken windows" policing — the popular policing model of swarming communities with police officers and aggressively pursuing fines and arrests for minor infractions. Also, Warren, a harsh critic of predatory financial institutions, didn't mention the emerging battle over civil forfeiture, the act of police seizing the assets of suspected criminals. But her defense of the cause won her praise from some in the movement.

"Warren, better than any political leader I've yet heard, understands the protests as a matter of life or death — that the American dream has been sustained by an intentional violence," DeRay Mckesson, one of the most influential members of the Black Lives Matter movement and a key contributor to Campaign Zero, told the Washington Post in response to Warren's remarks.

In her discussion of the disparities between white and black America, Warren pivoted from violence to voting rights to economic inequality. The last topic is the one that has ensured her rise to political superstardom, and this is where her analysis is most incisive. She made the case that trickle-down economics that have reigned for the past few decades has compounded the legacies of slavery and Jim Crow.

Warren argued that, in addition to ending the kind of predatory financial practices that specifically target communities of color, the country needs to shift the structural dynamics that produce those specific practices in the first place. Warren's recent political trajectory suggests that means making government immune from concentrated power in the economy the way it is from influence of the church.

The answer for Warren, in the end, is to take a multi-pronged approach.