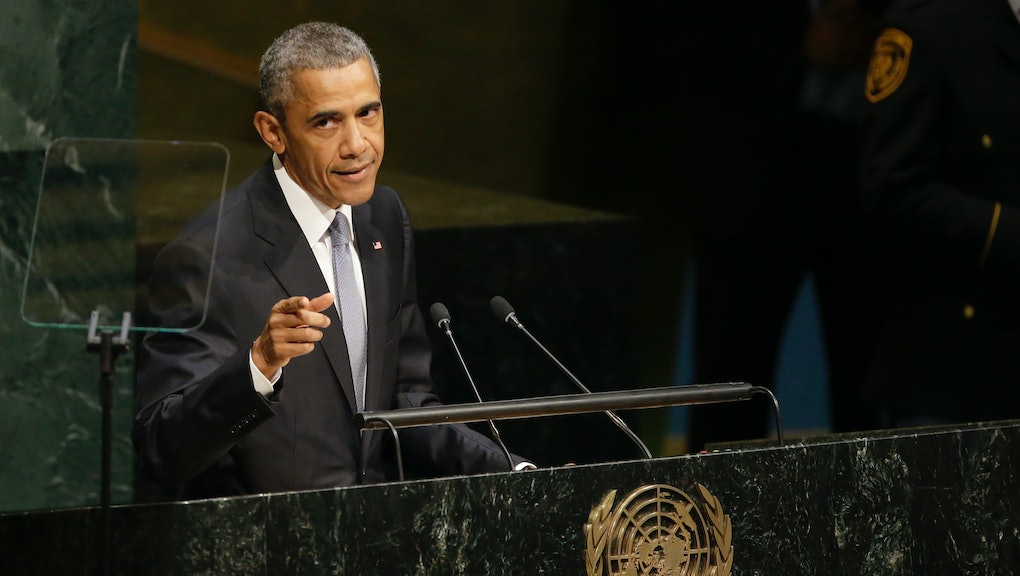 Increasingly desperate to scale back the bloody civil war in Syria, President Barack Obama in his address to the United Nations General Assembly said the United States was open to engaging with two long-time foes as part of a renewed effort to bring a "lasting stability" to the region.

"The United States is prepared to work with any nation, including Russia and Iran, to resolve the conflict," Obama told a global audience on Monday morning. He will meet with Russian President Vladimir Putin on the sidelines of the annual summit later in the day.

The goal, Obama said, was to foster a "managed transition" of power in Syria, where a nearly five-year civil war has killed more than 250,000 people and displaced a generation, sending refugees across the broken border into neighboring countries, such as Turkey and Jordan, and on dangerous seaborne voyages to safe havens in Europe.

Can it work? Despite the shared interest in forging some kind of peace in Syria, Obama and Putin are at cross-purposes on the future of Syrian President Bashar al-Assad and his autocratic government. Russia has close ties with Damascus and believes a detente can only be achieved by propping up the regime.

In his U.N. speech, Obama argued there could be no peace while Assad remained in power.

"We must recognize that there cannot be, after so much bloodshed, so much carnage, a return to the pre-war status quo," he said, contending that the Syrian dictator was the root cause of the ongoing strife.

"Let's remember how this started," Obama said. "Assad reacted to peaceful protests by escalating repression and killing that, in turn, created the environment for the current strife. And so Assad and his allies cannot simply pacify the broad majority of a population who have been brutalized by chemical weapons and indiscriminate bombing."

But Moscow, with its deep ties to the Syrian regime, has actually stepped up support for government forces over the past month, sending new weapons and special forces to help prop up Assad and aid efforts to combat the Islamic State group.

"There is no other solution to the Syrian crisis than strengthening the effective government structures and rendering them help in fighting terrorism," Putin said in an interview with 60 Minutes on Sunday. During his speech to the general assembly on Monday, he criticized the U.S. for disbanding the Iraqi army after the 2003 invasion, a decision Putin said empowered extremist activity in the region.

Twisted web: The situation was further complicated over the weekend, when the Iraqi government revealed it would begin to share intelligence about Islamic State with Russia, Iran and the Syrian regime. According to the New York Times, the Iraqis signed on to the agreement without notifying the U.S. government.

"We recognize that Iraq has an interest in sharing information on [the Islamic State group] with other governments in the region who are also fighting [the Islamic State group]," Col. Steve Warren, a coalition spokesman, said in a statement provided to CNN. But, he said, "we do not support the presence of Syrian government officials who are part of a regime that has brutalized its own citizens."

If the new agreement delivered a tactical advantage to Putin, it will be up to Obama to convince the Russian leader, with whom he remains publicly at odds over the origins of the crisis, to accept a broader strategy that could eventually dislodge Assad from his post.

Barring that, the barriers to meaningful coordination seem as robust as before, no matter what the president said on Monday in New York.